A concert pavilion was constructed at the pier-head in 1895, and from then until 1911, the wooden piles were gradually replaced with iron. The lifeboat station closed in 1922 and, in June 1924, the Southern Railway took over the pier. In the early 1930s the pier was rebuilt in concrete. After the Second World War, the pavilion concert hall was used as a ballroom.

In 1969, the tramway closed and the pier was partly dismantled, leaving gaps between the promenade and railway piers.

In December 1976, a five year re-planking operation was completed. In the early 1980s, a covered waiting area replacing the Victorian waiting rooms, was constructed on the pier-head. More parking spaces were also provided.

Trains still leave from the pier-head and ferries maintain a regular service from this 2305 foot pier to Portsmouth harbour.

In August 2010, the pier was closed to vehicles after the structure failed a routine maintenance check. Wightlink then announced that car drivers would have to pay towards repairs to Ryde pier with the re-introduction of a charge for vehicles using the pier. And the company said that the pier would remain shut to vehicles until March 2011.

In April 2013, Wightlink, the pier owners, organised a special Party on the Pier to celebrate the 200th anniversary of the laying of the pier’s foundation stone. A calm, sunny day saw hundreds attend the event which delved back into musical history.

The following month, a small section of the 3m long gangway at the pier’s main berth collapsed into the sea as it was being retracted following a ferry service. No-one was injured but the main berth had to be taken out of service for repairs.

December 2013 – Island commuters meet Wightlink managers
In December 2013, the first of a series of ‘Meet the Manager’ events was held by Wightlink in which senior managers discussed ferry services such as timetabling, fares and discounts offered to students and disabled people with commuters as they arrived home at Ryde Pier.

July 2014 – New NPS book launch to coincide with 200th anniversary of pier
The launch of the National Piers Society’s new book on British Seaside Piers coincided with the 200th anniversary of the opening of Ryde Pier. Commissioned by English Heritage the book was compiled by Anthony Wills and Tim Phillips of the National Piers Society’s executive committee. The Society’s 2014 AGM was held at Ryde.

July 2015 – £8 million needed to maintain Ryde Pier over next 4 years
In July 2015, it was reported that the Island Line railway connection between Ryde Pier and Shanklin needed £40 million to meet running costs and repairs in the next four years. This included £8 million of repairs to Ryde Pier. Concern was expressed that the line may need to be replaced with a bus service.

October 2015 – Long-term solution sought for Island Line
The Island Line railway connection between Shanklin and Ryde Pier, where it connects with the ferry service to Portsmouth, had been a concern when the franchise with the Stagecoach company ended in 2017. However, rail specialists were being enlisted by the local council to help secure the future of the line.

June 2016 – How To Ride A Tube Train Out To Sea
In June 2016, the LondonIst website published a fascinating illustrated article on Ryde Per’s Island Line trains, bought from London Underground in 1988, but dating back to 1938.

September 2016 – Spectacular finds at Ryde’s ‘Under the Pier’ event!
In September 2016, over 120 people took part in an event exploring the amazing sea life that lives under Ryde’s 200 year old pier, funded by Down to the Coast, a Heritage Lottery funded programme which focusses on celebrating and conserving East Wight.

September 2016 – Burning Wood Extinguished On Ryde Pier
Later in September, a section of burning wood on Ryde Pier had to be extinguished by crews from the Isle of Wight Fire and Rescue Service.

August 2017 – ‘Under the Pier’ event returns to Ryde Pier
In August 2017, it was reported that the ‘Under The Pier’ event, run by Arc and Artecology, would be coming to Ryde Pier again in September. This event reveals the undiscovered and curiously named world of marine life under what is one of the Island’s best-known landmarks.

November 2017 – Train fire on Ryde Pier
In November 2017, it was confirmed that a small fire – thought to be electrical – was extinguished by train staff prior to the arrival of the Isle of Wight Fire and Rescue Service. Ryde Pier remained open as normal.

August 2018 – Ryde goes ‘under the pier’ for the fifth year running!
In August, it was announced that Under the Pier 2018 would take place on Sunday 9th September. Visitors were advised to bring a net and a bucket and definitely wear waterproofs and wellies!
Read More

A ticket to Ryde! Island Line secures funding.
The government committed Network Rail to invest in the Ryde Pier railway, thus ensuring its future. This was good news for Island Line users, specifically those who used the ferry from Ryde Pier Head.
Read More

August 2019 – Ryde goes ‘Under The Pier’ again on the 30th August!
Under the Pier is the Isle of Wight’s end of summer celebration of the curious world and incredible marine life under Ryde Pier. Each year, on a low, low tide, hundreds of people and dozens of marine species come together, with the help of a raft of experts, for this mad, magic, narrowest and often wettest of outdoor adventures.
Read More

September 2019 – Ryde’s ‘Under The Pier’ event the biggest yet!
The Under the Pier event, run by Arc, Artecology and The Common Space, was more popular this year than it had ever been.
Read More

September 2019 – Toll increase at Ryde Pier
The pier toll increased by 100% from Sunday 15th September with the new cash price set at £2. The installation of a new, faster entry system did mean that contactless payment through bank cards and smartphones would now be accepted at the reduced rate of £1.30.
Read More

September 2019 – £26 million to renew Island Line and Ryde Pier
The uncertain future of Island Line was secured by a new rolling stock deal as well as a Network Rail commitment to renew the pier at Ryde, which carried the line into the town.
Read More

November 2020 – New webcam watches the comings and goings at Ryde Pier
Railcam UK, which puts cameras in strategic locations all around the UK, launched two new ones at the Ryde Esplanade Hotel, showing the hovercraft, trains, ferries and buses at the busy hub..and beyond. The first camera gave a static view to focus on Ryde Pier and the South Western Railway-operated Island Line.
Read More

December 2020 – Ryde Pier vintage underground rolling stock to be transferred to heritage line
A preservation group was hoping to return a vintage tube train to the Epping Ongar Railway. Since 1967 a number of second hand London Underground tube trains had been used on the ‘Island Line’ on the Isle of Wight, from Ryde Pier Head, to Shanklin. These trains were now due to be retired in January 2021, and the London Transport Traction group said it had secured a 2-Car Class 483 train for preservation.
Read More

March 2021 – Work begins on Ryde Pier railway upgrade
Work to upgrade the railway line on Ryde Pier began as part of the £26 million upgrade project, which would see the overhaul of Island Line tracks. New trains had already started arriving on the Island as the scheme progressed. Subcontractors were installing train protection and warning system grids to improve the performance of the line. The rail sleepers were also being treated with a formula to preserve the timbers and keep them safe.
Read More

April 2021 – No ticket to Ryde as Island Line reopening delayed
A major scheme to improve the Island Line network between Ryde and Shanklin was delayed once again, with trains not expected to run until later in Summer with no fixed date given.
Read More

July 2021 – Parsley, sage, rosemary and…Ryde Pier!
Thanks to volunteers from Aspire Ryde, a herb garden was flourishing at the end of Ryde Pier. Disused planters had been brought back into life by the charity to brighten up the Pier and support biodiversity. Once the herb garden was established, commuters wwould be welcome to pick a few herbs on their way home to use when preparing meals.
Read More

July 2021 – Ryde Pier scraps car toll
In July, ferry operator Wightlink announced that a toll to drive on to the country’s oldest seaside pier was to be abolished. Drivers had had to pay £1.30 to access Ryde Pier on the Isle of Wight before taking the FastCat passenger service to Portsmouth. The 207-year-old listed structure cost around £250,000 a year to maintain.
Read More

August 2021 – All change at Ryde Pier?
Historic England said more could be done to improve the proposed £10 million transport interchange scheme. It suggested Wightlink’s plans to regenerate the tramway pier into a pedestrian and cyclist pathway should be swapped with the main Ryde Pier. It said cars should go up the currently run-down pier with pedestrians able to ‘promenade’ on the main walkway.
Read More

November 2021 – A ticket to Ryde on new rolling stock!
The Isle of Wight’s first passenger train has arrived at Ryde Pier Head station, after ten months of work on Island Line’s tracks. The much-awaited newly refurbished rolling stock replaces the old-style tube trains that used to run between Ryde and Shanklin. Improvement and accessibility works and a new passing loop have also been added, to the tune of £26 million.
Read More

January 2022 – Ryde Pier Tram to star in anniversary event
A special event on Sunday 23 January will mark the anniversary of the Isle of Wight Steam Railway’s move from Newport to Havenstreet. The anniversary event will also see the public launch of the newly rebuilt Ryde Pier Tram. The pier tramway ceased operation in January 1969 and No.2 was purchased by the Island Vintage Transport Group and stripped down to the chassis to facilitate its removal from the pier.
Read More

February 2022 – Plans for Ryde Pier tramway to become a pedestrian walkway get a step closer
Plans for a new pedestrian walkway on Ryde Pier have been submitted to the Isle of Wight council’s planning department. The application for Listed Building Consent sets out details of how the old Ryde Tramway Pier – which was taken out of use in 1969 – will be transformed to provide pedestrian access to and from the pierhead.
Read More 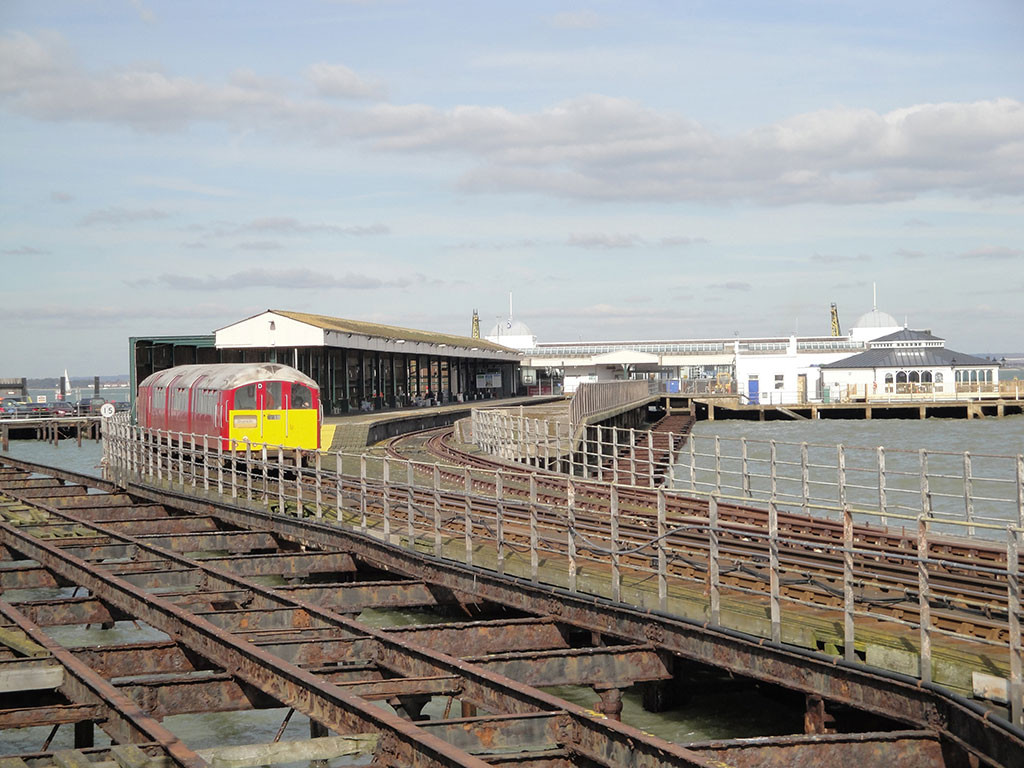 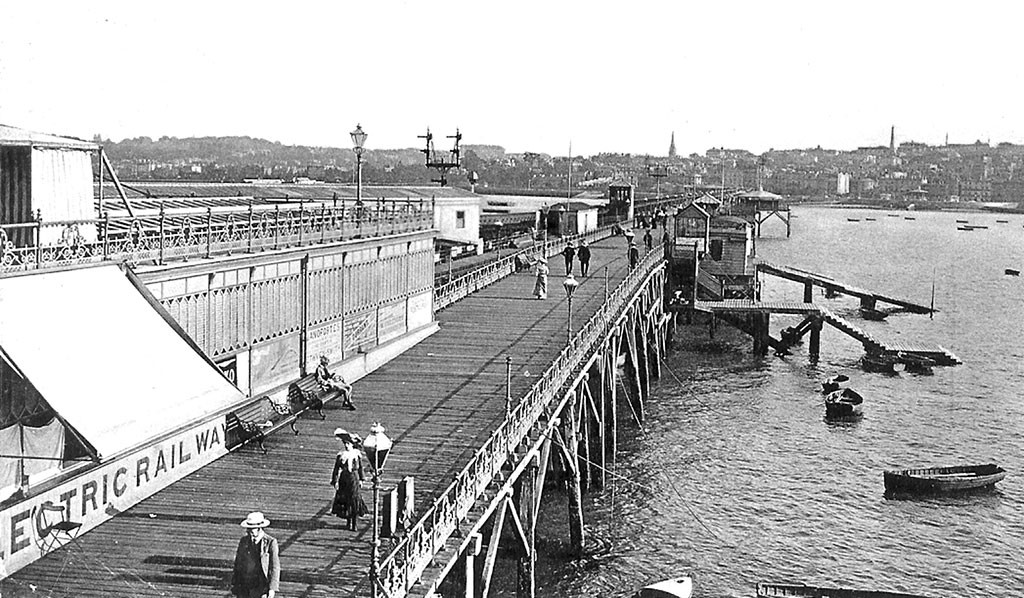 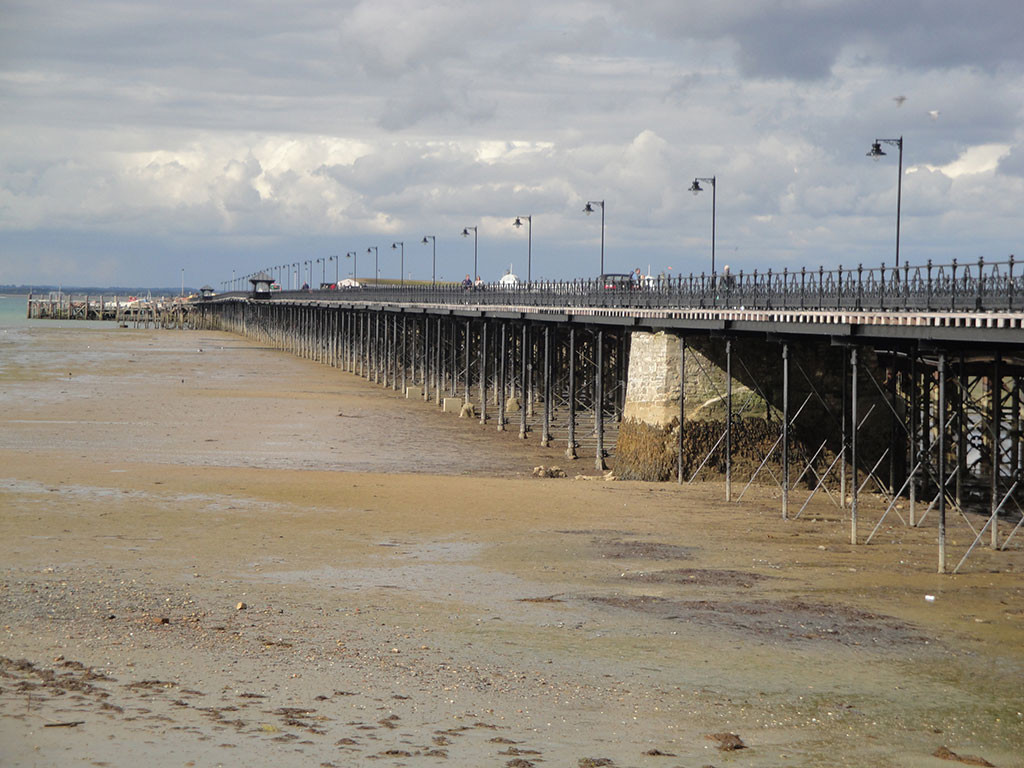 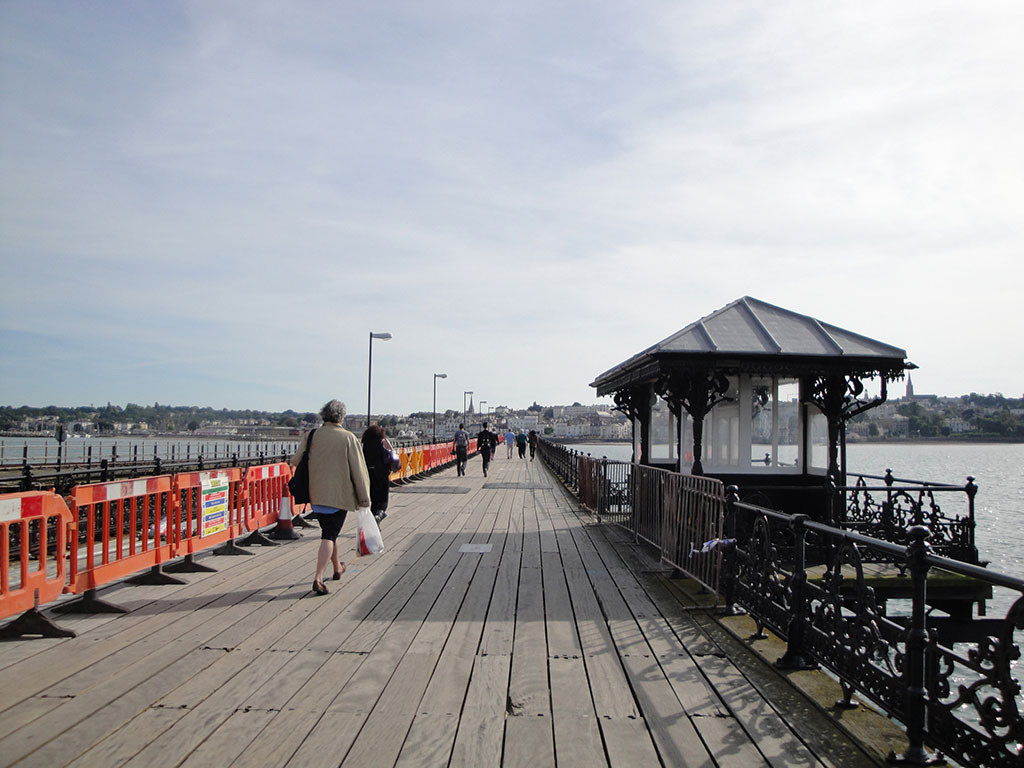 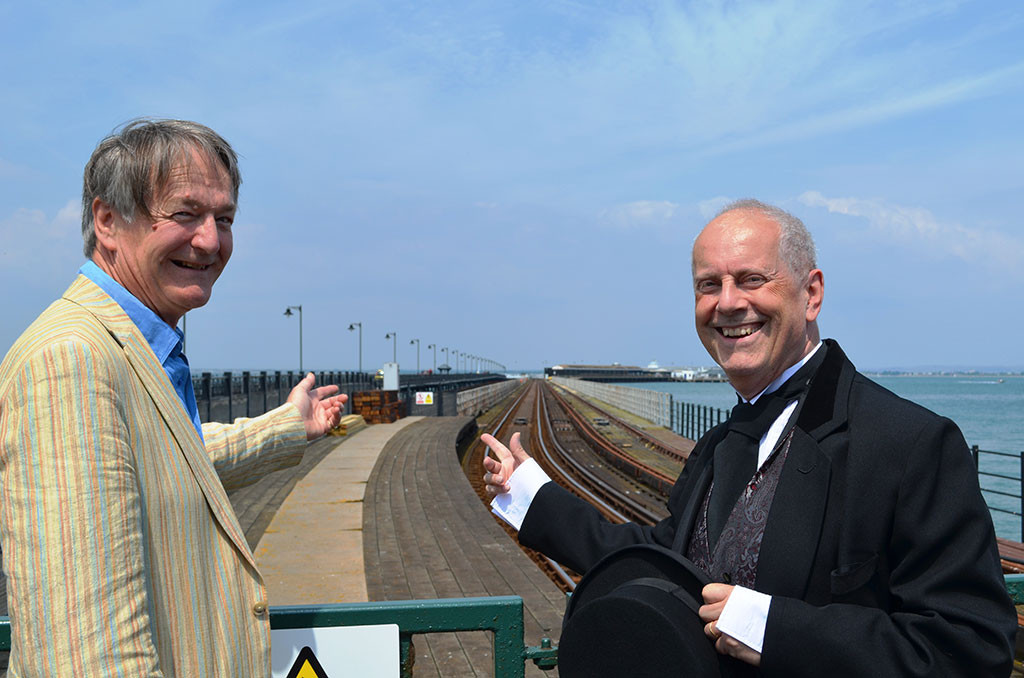 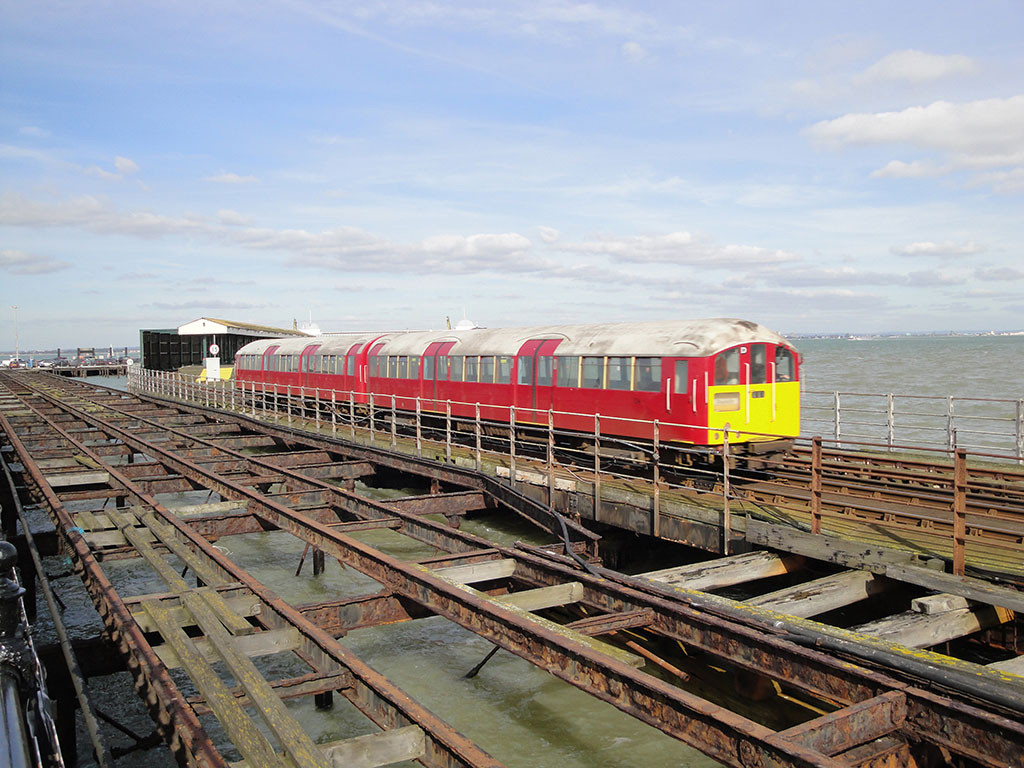