The Worthing Pier Company was formed in 1860 to build a 960 foot pier. Designed by Sir Robert Rawlinson, the first pile was driven on 4th July 1861, and the pier opened on April 12th 1862. A band provided the first pier entertainment in 1874. In 1881, there were daily performances from the Rhine Band. The decking was widened in 1888/9 and a 650 foot ‘Southern’ pavilion was built at the pier-head. Two entrance kiosks were also added. Steamers could not call at low tide but proposals in 1900 to extend the pier were abandoned because the water would only be 6 foot deeper if the pier’s length was doubled.

On Easter Monday 1913, the pier-head Southern Pavilion was isolated when the decking collapsed. The pier was officially re-opened by the Lord Mayor of London on May 29th 1914. Worthing Corporation purchased the pier for £18,978 in 1920. £40,000 was spent on extensive repair work and a new shoreward end pavilion (designed by Adshead & Ramsey) was begun in 1925. The pavilion opened in June 1926. The Southern Pavilion was destroyed by fire on 10th September 1933 and replaced by an £18,000 structure in July 1935. An amusement pavilion opened in 1937.

A nightclub was opened in the Southern Pavilion at the seaward end in 2007. It was later closed because of violence and under-age drinking.

Since 2008, Worthing Pier has been the home of the annual International Birdman competition, which moved to the pier after it could no longer safely be held on the pier at Bognor Regis. In 2009, in recognition of its importance to local tourism, West Sussex County Council doubled its funding for the event to £10,000. An estimated 20,000 people watched the Birdman event over the two days. The 2010 competition was estimated to have attracted 25,000 visitors to the town. The competition continued in 2011, although temporarily delayed by strong winds on the first day.

In October 2009, the End of the Pier International Film Festival moved to Worthing from Bognor. Then in November 2009, two kite surfers leapt over the pier in a spectacular though highly dangerous stunt.

March 2011 saw crowds of people on Worthing Pier to watch the procession of a giant, man-made “conga eel”. Later there was a performance from a live band. The activities were held as part of the Party on the Pier event to mark the launch of British Tourism Week, from March 12th to 20th.

In June 2011, the police appealed against a decision by the local council to permit the nightclub on the pier to re-open. There had been strong local objections to the decision and the police felt that the council’s decision was not in the public interest.

August 2012 saw another very successful Birdman Competion off the pier and also in August, the lease on the pier’s Southern Pavilion expired and a new party was sought to take over its management. However, the Pavilion was still empty by February 2013 and the council announced an intensive marketing campign to find a new lessee.

A number of unsuccessful applications were made to take over the running of the Pavilion, including a toy museum and a mixed-use arts centre and cafe and some local business people stated that the pier itself needed new attractions in order to encourage people to visit the town.

July 2013 – Historic venue set for new lease of life
Then in July 2013 it was announced that local businessman Phillip Duckett could be the preferred bidder with his plans to transform the building from a nightclub into a “multi-purpose venue”. It was hoped that planning permission, listed building consent, premises license and building regulations approval would be granted so that the building could be up and running by Spring 2014.

September 2013 – Pier’s Southern Pavilion set for major facelift
And in September 2013, businessman Phillip Duckett was announced as the local authority’s preferred bidder to transform the Grade II listed 1930s art deco Southern Pavilion building into a venue for weddings, conferences, and private parties, and including a restaurant and tea rooms.

October 2013 – Worthing’s Southern Pavilion designs have ‘wow factor’
In October 2013, a video interview with Phillip Duckett was published showing the proposed new designs for the Southern

April 2014 – Art deco pavilion reopens after renovation [Youtube Video of opening]
The refurbished Pavilion was finally opened in April 2014 to wide acclaim. It was described as a ‘light-filled, glorious open space’, with everything from the air conditioning to the sweeping oak flooring, having been carried out by local companies. The restored Pavilion now provided Worthing with an excellent venue, with outstanding 360-degree sea views, and a tasteful art deco look, reflecting the building’s history.

May 2014 – Unique outdoor Art on the Pier gallery is unveiled
A unique outdoor gallery featuring the work of 100 local artists with 40 panels dedicated to the WW1 Centenary was setup in May 2014 on the pier. The gallery was the brainchild of Vanessa Breen, 42, and Nadia Chalk, 45, the team behind community interest company Creative Waves, providing art in the community.

April 2015 – Southern Pavilion celebrates first anniversary
The Pavilion welcomed over 90,000 visitors in its first year and held a variety of events from award ceremonies to weddings.

January 2019 – Worthing stars in new Stan and Ollie film!
Alongside stellar performances from the headline acts, a familiar location in Worthing was set to be an unlikely star – with the town’s Lido used as a backdrop for a key scene in the movie.
Read More

February 2019 – ‘Time for new ideas’ at Worthing Pier Southern Pavilion
Phil Duckett, owner of the Pavilion which was up for sale, said the Southern Pavilion would always mean a lot to him: “It’s a jewel in the crown of Worthing and something the town should be proud of,”
Read More

August 2019 – Worthing Pier remains open during safety maintenance works
According to Worthing Borough Council, the scaffolding was put up due to improvements to the pier’s fire safety systems which were due to be completed by October.

September 2019 – Worthing Pier’s Southern Pavilion under new ownership
The owners of an award-winning seafront cafe in Lancing were set to take over the ‘iconic’ cafe at the end of Worthing pier. Alex Hole, the managing director of The Perch, on Lancing’s Beach Green, confirmed the purchase of the Southern Pavilion freehold.
Read More

September 2019 – New owners of Worthing Pier’s Southern Pavilion receive a warm welcome!
For two weeks, the Southern Pavilion had been trading with a limited menu of tea and cakes, ahead of a full refurbishment and rebrand planned for later in the year year. Alex Hole, the managing director of The Perch, on Lancing’s Beach Green, said the response from the public so far had been ‘really positive’.
Read More

May 2020 – Worthing pier reopens with new social distancing markers in place
May 2020 saw Worthing Borough Council reopen the pier for residents to use. Visitors to the pier were asked to follow a new one way system to ensure social distancing was maintained and new signs were installed and markers drawn on the ground to ensure this was followed.
Read More

June 2020 – What a load of rubbish! Worthing Pier litter bin sails to Germany
A rubbish bin thrown from the end of a pier in West Sussex was washed up about 450 miles away – in Germany. Vandals in Worthing launched the public receptacle – which bore the town’s crest – into the English Channel. After an estimated six-month journey it washed up on the shore of the German island of Borkum. Frerk Richter, who found the litter bin last month, contacted Worthing Borough Council and told them he had transformed it into a flower container.
Read More

July 2020 – Renovation still planned for Worthing Pier’s Southern Pavilion
The pavilion closed in October 2019, shortly after it was taken over by Alex Hole, owner of the Perch cafe on Lancing seafront. At the time, he said a full renovation and rebrand was planned for the iconic Art Deco building. Giving an update, he said plans for the works had been progressing over the previous few months and the team would be soon be submitting a planning application.
Read More

October 2020 – Planning permission sought for renovation of Worthing Pier Southern Pavilion
Alex Hole, owner of the Perch cafe on Lancing seafront, announced in October that was planning a number of changes to the iconic Art Deco building. Refurbishments included extending the kitchen, moving the bars to locations more suited to a restaurant environment, a new corridor for the toilets and adding booths to balconies. As well as a number of internal alterations, new kitchen extracts, an illumination fascia sign and flags were proposed.
Read More

October 2020 – Plans approved for Worthing Pier’s Southern Pavilion
Gary Peck, the council’s planning services manager, said some of the internal changes such as removing some ‘ugly’ partitions would make a significant difference to the appearance of the building. He added: “Its recent period of disuse has left it in something of a state and clearly not a building that fits with what we want to see at the end of the pier. “This application does offer a significant opportunity to restore it to its former glory. Used properly it could be a real asset to the pier and the town.”
Read More

December 2020 – Worthing Pier lights up the sky tonight!
Laser Light City by Seb Lee-Delisle came to the pier between 6pm and 11pm for two days and saw locals take control of six powerful lasers being installed at the iconic listed landmark. When the spectacle went live, participants could visit the laserlight.city/worthing website – which had all the details of the event – and click a link to join a queue to control the lasers, which could be moved around by tapping and dragging on the screen.
Read More

February 2021 – Worthing Pier Southern Pavilion due to reopen as ‘Perch on the Pier’ this summer
Mr Hole and his team were focussed on restoring the pavilion building, which helped Worthing win Pier of the Year in 2019. He was removing layers of previous work going back years so he could restore it to former glory. Larger kitchens were necessary for the range of food and drink Perch would be offering. “We are working hard on the renovation and really having to go back and put right about the last three renovations so we can get exactly what we want,” he said.
Read More

August 2021 – A preview of the renovation work at Worthing Pier’s Southern Pavilion
Perch on the Pier was expected to make an appearance ‘towards the end of the year’ said businessman Alex Hole. “There is quite a degree of civic pride in the pier and I think it’s been a long time since people have been really proud or actually been in the Southern Pavilion, and we want people to come back and enjoy it.” One of the key parts of this latest transformation was opening up the top floor of the pavilion. Mr Hole said: “The upstairs is exceptional, no one has seen this open for a long time, it’s probably been around 50 years.”
Read More

July 2022 – Maintenance contract to be awarded at Worthing Pier
Worthing Borough Council owns both the lido and the pier with the structures costing around £11,000 and £183,000 to maintain each year respectively. Adur and Worthing Councils are set to award the important contract to JT Mackleys & Co.
Read More 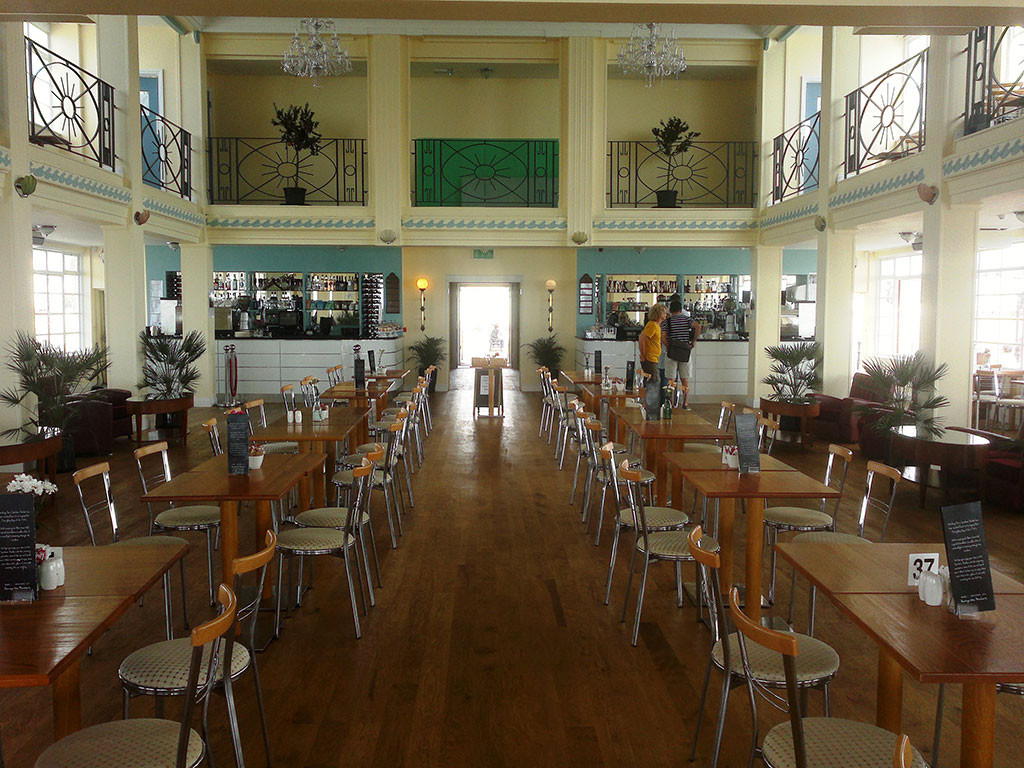 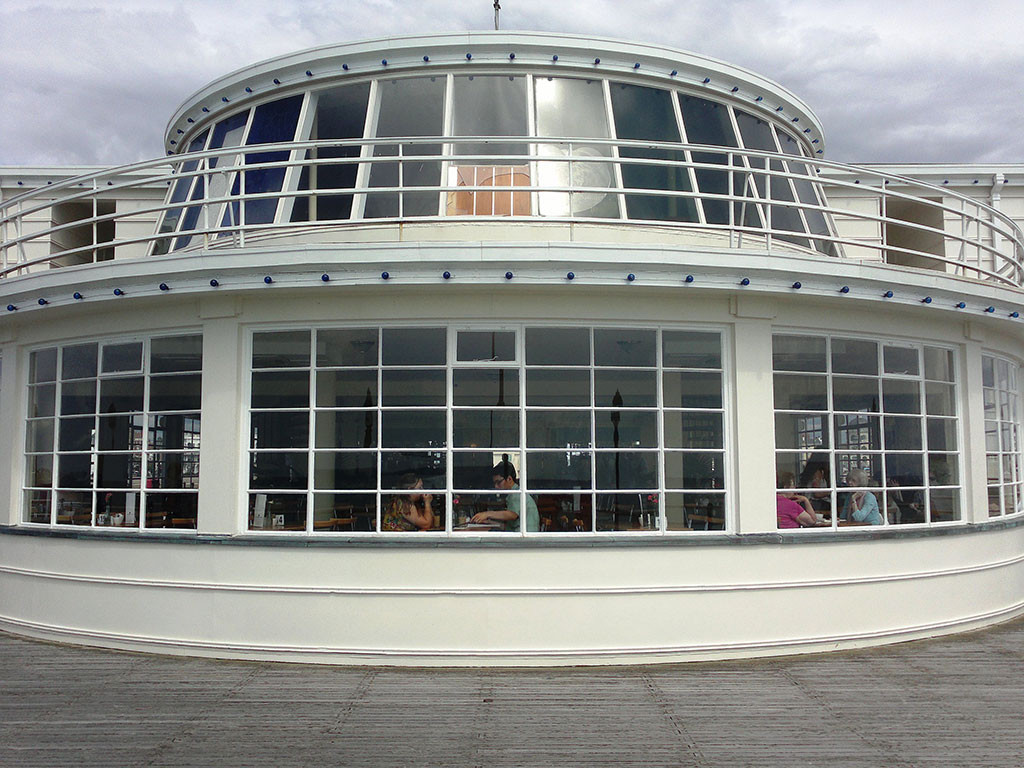 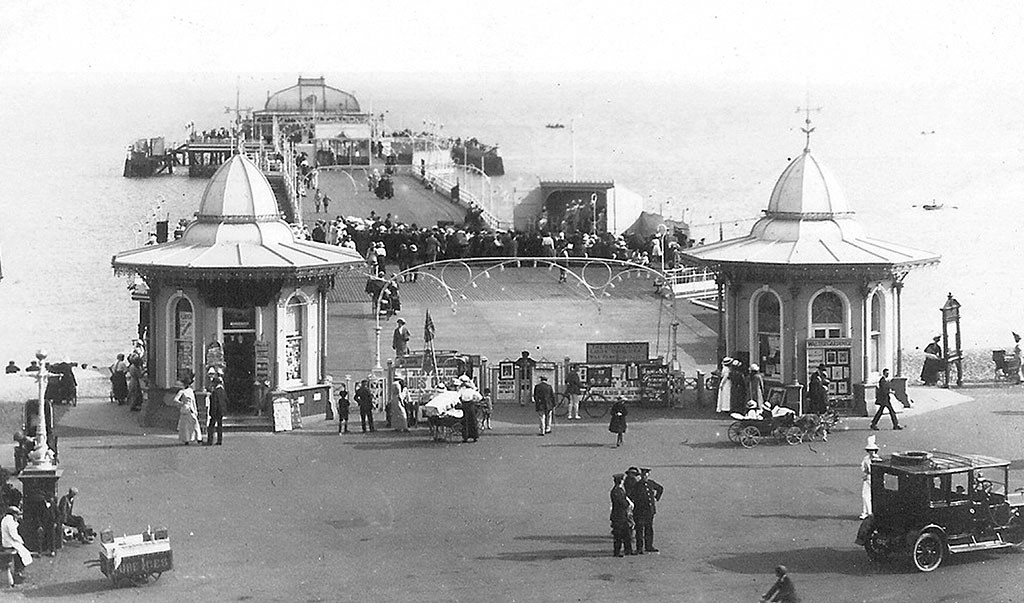 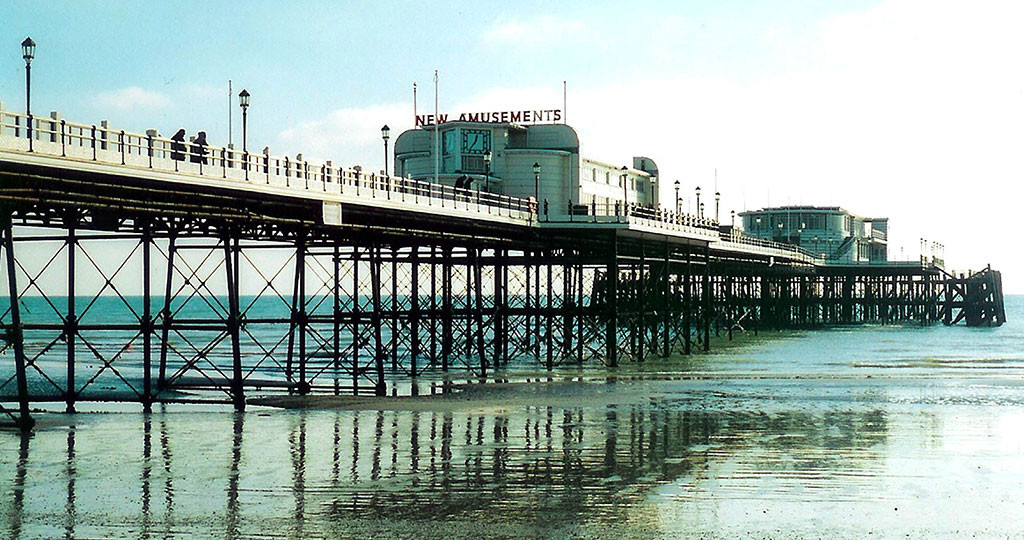 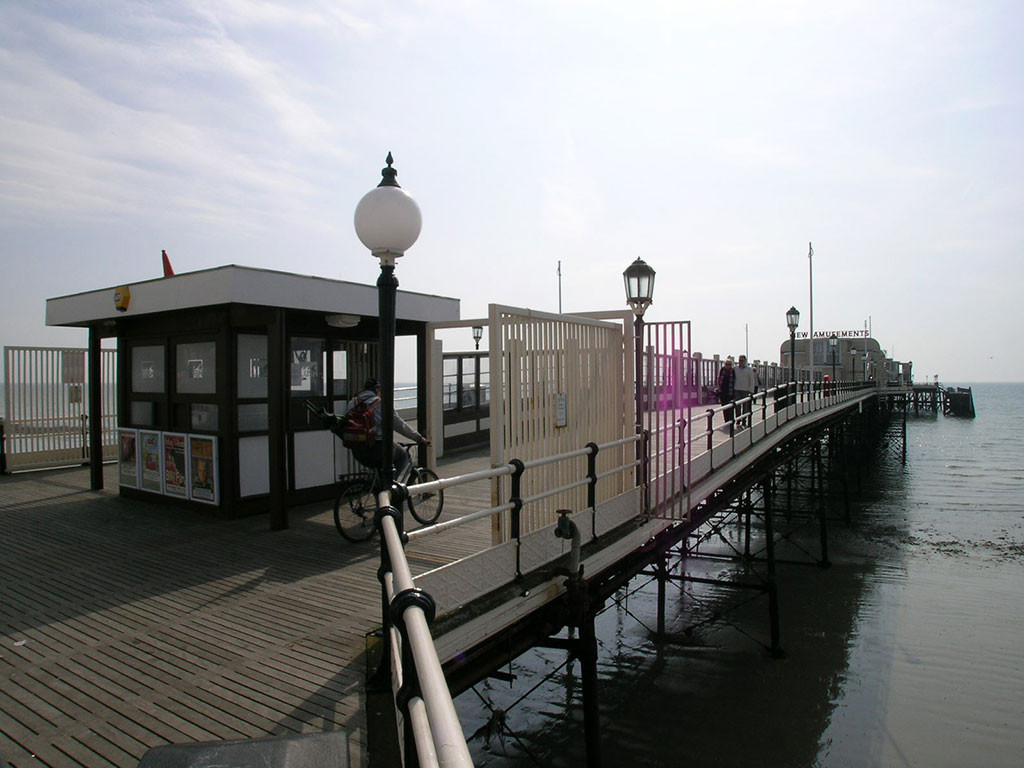 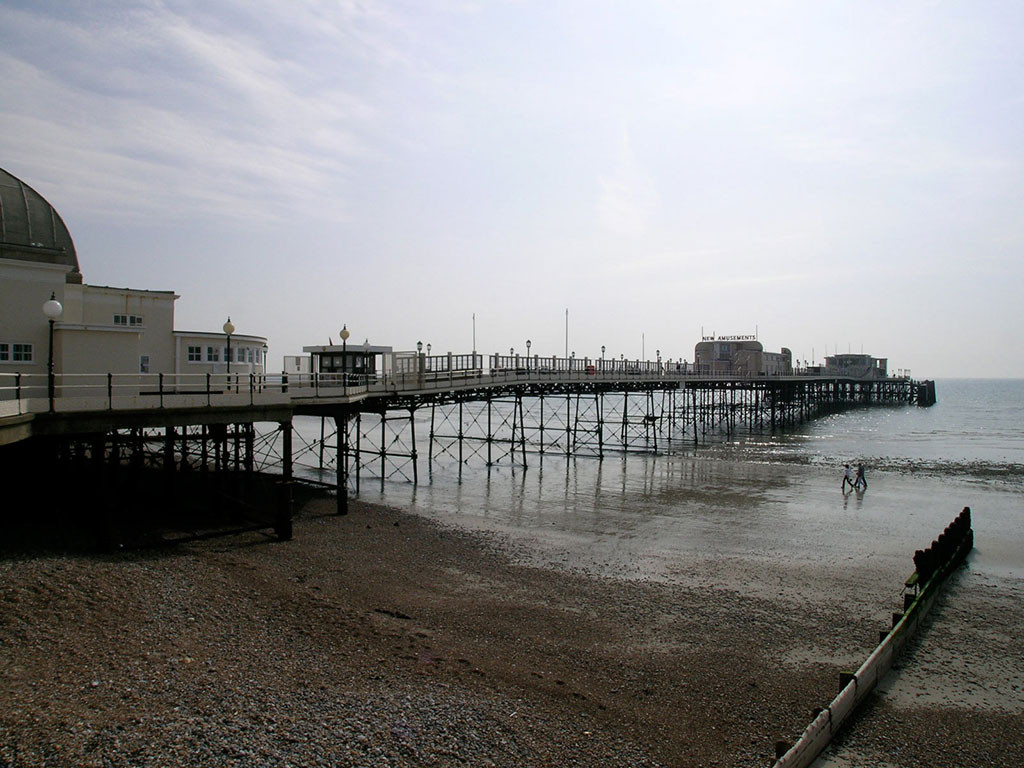