Southwold pier was constructed in 1900, following the passing of the Southwold Pier Order in 1899. 810 feet long, it was built to the design of W.Jeffrey.

The Amusement Equipment Company Ltd took over the pier in July 1906, after the Coast Development Company was wound up. In 1934, the T-shaped head was destroyed by storms. Two years later, a new pavilion was built at the shoreward end, replacing existing buildings.

‘Belle’ steamers called from London, Clacton and Great Yarmouth but this service ended in the 1930s. The pier was sectioned as a war precaution in 1940 and was damaged by a mine. It was rebuilt in 1948 at a cost of £30,000. A gale in October 1955 isolated the seaward end, which washed away. Another storm in February 1979 reduced the length to 150 feet.

Part of the pavilion became a public house in 1960 and, after Mr and Mrs Iredale acquired the freehold in 1987, £100,000 was spent restoring the first floor theatre and function room. The pavilion re-opened in December 1988.

A major refurbishment program was started in 1999 in order to rebuild the pier. This was completed in 2001 almost 100 years after it was first opened. In 2002 the T-Shaped end was additionally added, bringing the pier to a total length of 623 feet (190 m), enabling visits by the PS Waverley paddle steamer and its sister ship the M.V.Balmoral.

A range of highly innovative of attractions and amusements have been developed for the pier which no doubt will assure its continuing popularity.

In 2005 the pier was sold to new owners, Mr Stephen Bournes and his wife Antonia, under whose stewardship it continued to be one of the Suffolk coast’s most cherished attractions.

In April 2007, the Bournes were granted permission to build apartments on the upper floor of the pier, but these could only be used on a seasonal basis. So, in 2009, a new plan to demolish the old pavilion and build a new luxury hotel was proposed. Waveney District Council finally approved the plans to build a five storey 30 bedroom hotel over the pier entrance in early 2010. Welcoming the decision its owner Stephen Bournes said that 6 full-time and 6 part-time jobs would be created, in addition to the 95 staff already employed during the summer season.

However, in July 2010 in a shock move, the pier was put up for sale, the owners being unable to commit to a higher than estimated cost for the new hotel. Then in January 2011, to great relief in the local community, the Bournes decided to take the well-loved structure off the market. Mr Bournes said the long-term plan was still to proceed with the hotel project but that in the short term, they would be investing £150,000 on new toilets and a larger kitchen area for the Boardwalk restaurant.

In August 2011, about a hundred people had to be evacuated from the pier because of a fire in a cafe. The blaze was dealt with quickly and effectively by the local fire service and the pier was soon reopened.

In May 2012, the ‘Rough Guide to Britain’ travel guide named the Under the Pier Show at Southwold Pier as number nine in the the top 10 “things to do in Britain”.

Then, in February 2013, Stephen Bournes, who had owned the pier since 2005, announced that it had been sold to Gough Hotels for an unspecified amount. Mr Robert Gough, the new owner, announced proposals to build a 21st Century art deco hotel that is “sympathetic” to the town’s history to replace the arcade at the front of the pier.

June 2015 – Southwold Pier tops 1 million visitors a year
In June 2015, it was reported that visitor numbers were reaching a million per year. The pier is very popular with local residents and is famous as the home of the quirky amusements created by the brilliant engineer Tim Hunkin.

November 2017 – New attraction for Southwold Pier’s ‘Under the Pier Show’
The new machine, Air Bed-n-bug, was one of Tim Hunkin’s most detailed and intricate yet. It was the latest addition to a collection which began in 2001, when Southwold Pier was being rebuilt.

May 2019 – Southwold Pier to screen late-night movies?
Southwold Pier applied for a licence to entertain visitors with evening film screenings and live music. The application would allow the pier to show films both indoors and outdoors between 6pm and 11pm from Thursday to Sunday.
Read More

New Pier View Bar opens at Southwold Pier
An old ballroom at the pier was reopened as a seaside bar – boasting stunning views of one of Suffolk’s best coastlines and creating four new jobs.
Read More

October 2019 – Southwold Pier cafe inundated by soggy sausage dogs!
More than 100 dachshunds and their owners braved torrential rain for a trip to the seaside. But it had to be called off because of heavy rain, so Southwold Pier cafe offered shelter to people and pets.
Read More 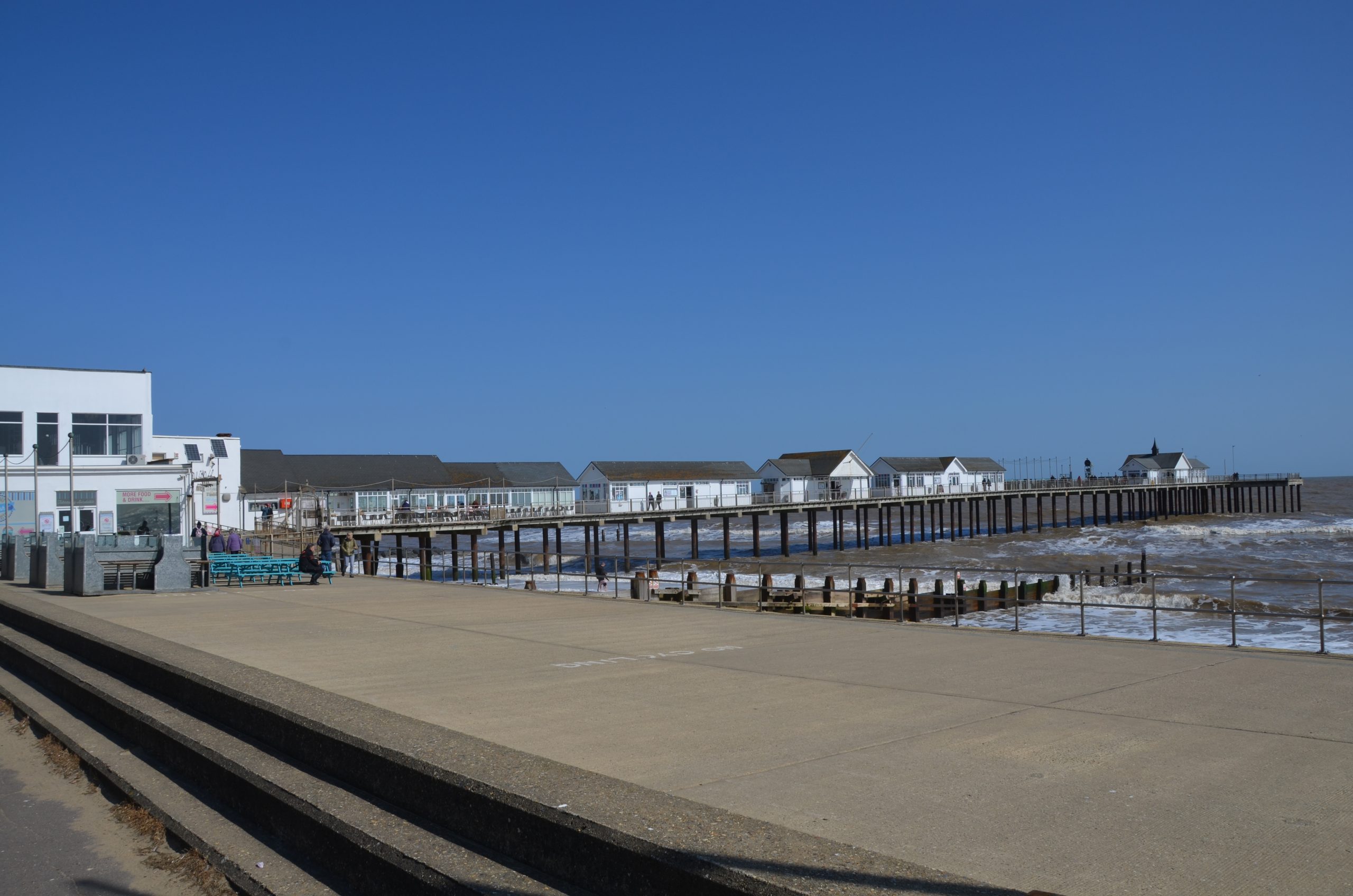 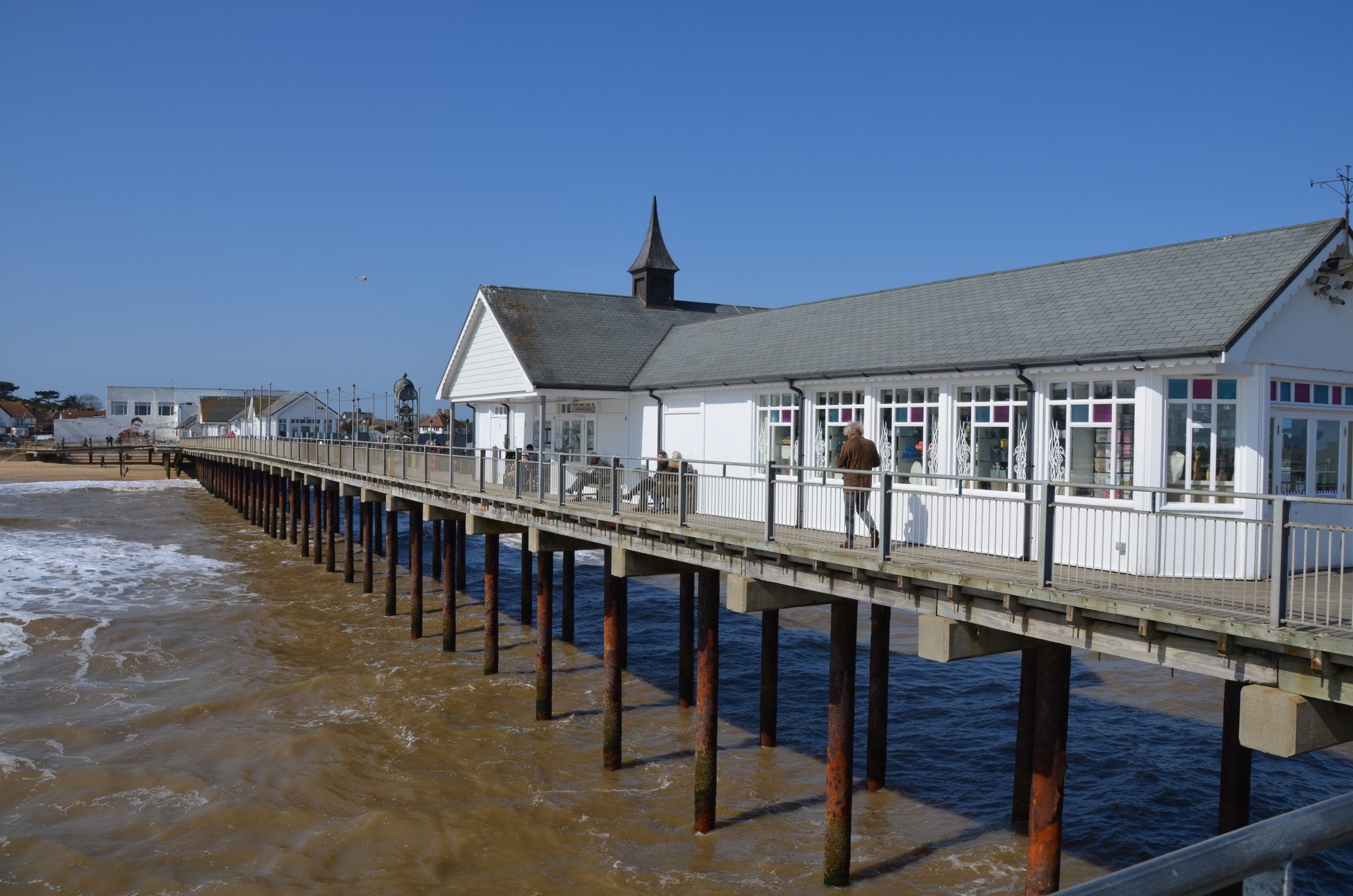