July 2014 – Shotley Pier goes up for sale
In July 2014, Shotley Pier was put up for sale by its owners, Colchester-based East Anglian Renovations (EAR), with a price of £195,000. The pier was built in 1894 as a landing stage for a ferry from the tiny Suffolk village across the River Stour to Felixstowe, and Harwich in Essex and became a well known Victorian seaside landmark.

February 2017 – Shotley Pier project given backing from Suffolk MP
In February 2017, campaigners pledging to restore Shotley Pier were given a boost when local MP, James Cartlidge, hailed their project as “brilliant” and joined villagers for a tour of the 122-year-old pier which could soon be given new life thanks to a five-figure funding boost.

March 2017 – Shotley Pier share offer announced
The following month, it was announced that community shares, at £25 per share and a minimum purchase of two shares, would be being offered to buy the 122-year-old Shotley Pier. The aim was to initially raise £100,000 to buy the pier from the current owner and then to start renovation work. The pier would be made secure and work would progress from the land side along the pier until it was completed. It was anticipated that a figure in the order of £350,000 would be needed to complete the renovation, over a three-year period.

September 2017 – Community group raises £58,000 to buy Shotley Pier
In September 2017, it was announced that Shotley Pier Group had raised £58,000 through a share scheme to save the 122-year-old pier. Money raised by the group would be matched by the Power to Change Community Shares Booster Programme which had pledged to match fund up to £100,000. John Davitt, chairman of the Shotley Pier Group, said: “We are overwhelmed by the support of our investors.”

November 2017 – Shotley Pier Group look set to buy the pier after funding boost
In November 2017, the historic landmark which played important roles in Suffolk before falling into disrepair seemed set for a return to use after community fundraising efforts reached a significant milestone.

December 2017 – Another step closer to ownership for Shotley Pier Group!
In December 2017, it was reported that Suffolk MP, James Cartlidge, had joined the campaign to save Shotley Pier as the community group hoping to save Suffolk’s only railway pier neared exchanging contracts.

February 2018 – Congratulations to Shotley Pier’s new owners!
In February 2018, the Shotley Heritage Charitable Community Benefit Society Ltd completed the purchase of the historic Shotley Pier – with the group then seeking volunteers and grants to complete its renovation over the next five years.

August 2018 – Good luck to Shotley Pier as planning application is submitted!
An application was submitted to restore the historic structure to its Victorian style, renovating walkways and providing two new buildings to be built on decking beside the pier – a visitor centre with cafe and a workshop facility for ongoing repairs and maintenance.
Read More

August 2018 – A way forward for Shotley Pier plans?
Opposing shareholders of Shotley pier were due to meet to discuss a potential compromise after a fiery planning meeting the previous week week ended in the plans being refused.
Read More

December 2018 – New designs for Shotley Pier to go before planners
The main areas of compromise were to reduce the height and width of the buildings, reduce the length of the visitor centre displaying the history of the landmark by reducing the number of tables and chairs, and removing office space.
Read More

January 2019 – Shotley Pier designs put to the vote
Six months on from the planning meeting in August – which saw the original proposal turned down – shareholders were divided on the best course of action.
Read More

January 2019 – Shotley Pier takes a step closer towards final plans for regeneration
The appointment of a planning inspector was urgently needed to begin the next stage of restoration of a historic pier, a conservation group said.
Read More

April 2019 – Fingers crossed it’s second time lucky at Shotley Pier!
It was hoped that rejected plans for the revival of Shotley’s historic pier could be overturned as a planning inspector prepared to take a second look at the decision.
Read More

June 2019 – Shotley Pier redevelopment dealt another blow
An appeal launched by campaigners against the decision also failed, with a planning inspector’s report stating that: “No matters, including benefits of the development and the scope of possible planning conditions, have been found to outweigh the identified harm.”
Read More

September 2019 – Shotley Pier repair work begins after securing £145,000 grant!
Supporters of Shotley Pier were “delighted” after scooping £145k from the European Agricultural Fund for Rural Development. Added to a Coastal Revival Fund gained earlier this year, the investment meant work could start on repairing the land bridge section of the pier from the pavement edge out into the river.
Read More

June 2020 – Shotley Pier restoration work to begin
In June 2020, it was announced that work would begin on Suffolk’s historic Shotley Pier, months after it had been due to start. It was bought by the Shotley Heritage Charitable Community Benefit Society in 2018 and people were given the chance to buy their own chunk of the structure as well as having a say in how its run.
Read More

December 2020 – First section of Shotley Pier restoration completed!
The first 30 metres (98 feet) of the pier were completely renovated with temporary railings installed to allow people to use the pier. The pier, which is 158m in length, has a storied past, having been first constructed in 1894 and previously used to ferry mail, coal, munitions and sailors across the River Stour. The pier’s Board hoped that it would be able to open the completed section to the public soon but had had to defer a grand opening with ribbon cutting until Spring 2021.
Read More

May 2021 – Shotley Pier gets set to open for the first time in 30 years!
The Shotley Heritage Charitable Community Benefit Society purchased the landmark in 2017 and restored it the previous year, with the first 30 metres (98 feet) of the pier being completely renovated. However, due to Covid, it was decided to wait so that more secure handrails could be put in place. Amicus Civil Engineering was due to install the handrails in June, meaning people should, at last, be allowed to walk along part of the pier.
Read More

September 2021 – Renovation work delayed at Shotley Pier
There were hopes the revamped Shotley Pier could soon be welcoming guests after being hit by a series of delays including supply chain issues. The group behind the major renovation of the derelict pier saw their original plans delayed by the Covid pandemic, then the revised opening in May was kicked back thanks to a combination of issues caused by Brexit, global supply issues and shortage of delivery drivers.
Read More

September 2021 – Plea for more investors to complete the restoration of Shotley Pier
Four years previously, campaigners started the long process of raising enough funds to save the pier. Together, the community managed to get together a huge £500,000. Work to restore the Victorian structure back to its former glory started last summer, using reclaimed Greenheart timber – the hardest wood in the world. So far, far one-sixth of it had been revamped.
Read More 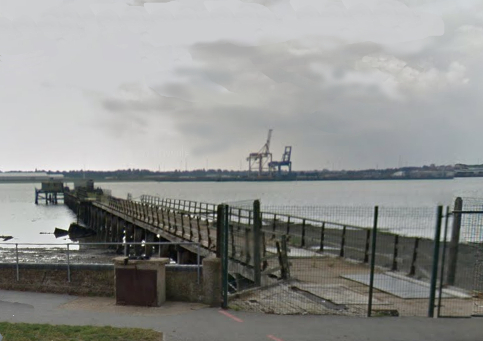