The 2241 foot pier was built for the Isle of Man Harbour Board for £45,000. It opened on 22nd July 1886. Designed by Sir John Coode, construction was by Head Wrightson and Co. of Stockton-on-Tees. The 3 foot gauge tramway, originally used to carry building materials, was now used for baggage transport. A new landing stage opened in 1899 and an enclosed passenger van entered service that August.

The railway was hand propelled until 1937 when the 8hp Planet (a small petrol locomotive) entered service. A new Wickham Railcar followed in August 1950, while 1955/6 saw the replacement of the two diverging track spurs with a short straight section on to the road. This gave the line a length of 2080 feet.

In 1956, the pier entrance was rebuilt. In 1969, a mere 3054 steamer passengers disembarked, a fall from 36,000 per year prior to 1914. After the 1970 season, the pier was closed to steamers but remained open to anglers and holidaymakers. The tramway continued to operate.

By 1979, the wooden berthing head was fenced off and the cafe and tramway only traded during the summer. The tramway closed in 1981. In 1990, the main berthing head had separated from the pier and was awaiting removal by a government workforce.

Repairs by the Department of Highways, Ports and Properties (DHPP) enabled the pier to re-open for the 1990 season but, within 48 hours of opening, the repair work had been vandalised. In 1991, the DHPP stated that they would close the pier if there was further vandalism.

The ‘Friends of Ramsey Queen’s Pier’ were formed in 1994, and a section was opened for National Piers Day in June 1996. Also in 1996, divers removed broken tie rods, cleaned the bracketry and installed new ties. The cost of these repairs was met from the pier’s £40,000 annual provision.

In 1999, a report commissioned by the Friends of Ramsey Queen’s Pier found that the Pier was in much better condition structurally than many British piers and full refurbishment would cost £1.273 million.

However, for almost the next ten years, progress was painfully slow, consisting primarily of just a series of reports and little actual movement, much to the dismay of the Friends of the Pier.

Finally, in January 2009, a Council of Ministers Working Group decide that Queen’s Pier is of national heritage significance and should be refurbished.

In July 2009, Tony Wills and Tim Wardley visited the pier and were fully supportive of the Friends campaign to restore the pier.

However, in September 2009, consulting engineers BWB Consulting were commissioned by the Steering Group established by the Council of Ministers to progress options to secure the future of the pier. The Steering Group finally produced a recommendation in May 2010 that the pier be saved from demolition – but would remain closed to the public as there was no money for its restoration. The cost of £1.8m for this option was agreed by the Tynwald.

In May 2012 a new report stated that Ramsey Pier could be restored – and progressively reopened to the public – in seven phases costing between £1.2 million and £1.7m each. But director of harbours Captain Mike Brew said that there was little likelihood of Tynwald approval being sought for such a phased scheme for at least another five years.

July 2015 – Plans progressing for pier restoration
In July 2015, it was reported that the Ramsey Queen’s Pier Restoration Trust was working with the government on a lease agreement in order to start work bringing the structure back into use. The harbour director had confirmed that a three-year lease was being drawn up to offer the pier at a peppercorn rent to the trust who were beginning fund-raising to restore the first 50m section.

September 2015 – Pier’s future debated at Ramsey meeting
Over 100 people attended a public meeting in September 2015 to gather support for the Trust’s plans to restore the pier.

March 2016 – Help required for pier restoration project
In March 2016, campaigners who had been negotiating with the Manx government for a licence to access to the pier to carry out a survey of the structure announced that they hoped to have the keys to the long-closed pier within two weeks. An initial 3 year licence would enable a formally constituted trust to complete repairs to the first three bays, which would provide a better understanding of what the total project. On completion of this phase, it was intended that a 99 year lease would be issued to allow the remainder of the pier to be finished, and brought back into public use. Local people were being urged to join the project group to help bring about the restoration. Ways of raising the cash needed for the restoration work were being explored and a number of events were being targeted to try and raise the money required.

May 2016 – Pier unlocked for first time in 25 years
And in May 2016, the gates of the 130-year-old Victorian pier were officially unlocked for the first time in 25 years when the government handed over the keys to the Queen’s Pier Restoration Trust (QPRT). It was estimated that full restoration could cost around £1.5m. The pier would however remain closed to the general public. A QPRT spokesman said the next stage of their campaign would see a survey undertaken before a £60,000 project got underway to restore the first of 55 bays.

July 2017 – New lease can mean restoration to begin at Ramsey Queen’s Pier?
In July 2017, the Queen’s Pier Restoration Trust (QPRT) were granted a five-year lease on the pier which they hoped would enable them to begin the restoration of the 130-year-old Victorian landmark, which had been closed since 1990. The Trust’s chairman described it as a “momentous day” for the project.

November 2017 – Ramsey Queen’s Pier needs your help!
By November 2017, public donations had already raised enough for repairs to get under way, but campaigners said around £8,000 more was needed to buy steel.

June 2019 – Ramsey Queen’s Pier secures grant
A heritage fund set up to support Manx projects provided a cash boost for a scheme refurbishing this Victorian pier. The Donald Collister programme, named after the benefactor who left £1m to the nation, gave £5,000 towards the work on Ramsey’s Queen’s Pier.
Read More

September 2019 – Progress update on Ramsey Queen’s Pier
Project manager Stuart McKenzie said: ’As far as an estimate of when phase 1 will be completed, i.e. bays 1-3, this is difficult to calculate until we see what problems come to light. ’But if no major problems are encountered, and we can get a decent fabrication slot for bay 2 and 3’s steel, then I would hope the initial pilot phase can be completed next year.’
Read More

May 2020 – Restoration work continues at Ramsey Queen’s Pier
Another key milestone was reached in May 2020 in the restoration of a prominent landmark in Ramsey. The Queens Pier Restoration Trust said the first plank had been laid down on Bay 1 and stanchions and handrails had been fitted there.
Read More

September 2020 – First bay of Ramsey Queen’s pier restoration nears completion
In September 2020, it was announced that Queens Pier Restoration Trust planned to allow residents to come and see the plaques for themselves as well as the completed Bay 1 section. Once ready, the trust intended to then invite groups of up to ten people at a time to visit and see the work so far.
Read More

November 2020 – Restoration of Ramsey Queen’s Pier makes superb progress
Another big lift operation took place in November as the first phase of Ramsey Pier’s restoration headed towards a spring 2021 completion. Installation of H-beams in bay two was the final steelwork required for phase one of the project.
Read More

January 2021 – Discussions begin on the next phase of regeneration for Ramsey Queen’s Pier
In January, volunteers behind the restoration of Ramsey Pier began talks with government over the next phase of the project. The Queen’s Pier Restoration Trust signed a five-year lease with the Department of Infrastructure in 2017 to refurbish the first three bays of the Victorian landmark. That phase of the scheme was due to be completed by late spring. And the trust was hoping to sign a 15-year lease to continue the project, with the second phase to include bays four to eight.
Read More

May 2021 – Ramsey Queen’s Pier gets set for July opening!
It was announced that a grand reopening of the newly-restored first section of Queen’s Pier was planned for July, timed to mark the 135th anniversary of the opening of the Ramsey landmark in 1886. Supporters of the community-led restoration project were invited to come onto the pier to view the dedicated plaques for the decking planks and stanchions they had sponsored. There were 360 plaques fitted at the moment for the planks, railing stanchions and the two refurbished lamp posts.
Read More

July 2021 – Ramsey Queen’s Pier reopens after 30 years!
Part of the Isle of Man’s Queen’s Pier reopened to the public for the first time in more three decades. Hundreds of people attended a ceremony for the opening in Ramsey. Work to restore the Victorian structure was entirely funded by donations and carried out by members of the Queen’s Pier Restoration Trust.
Read More

August 2021 – Second phase of Ramsey Queen’s Pier to begin
In August, volunteers were given permission to begin the second phase of works restoring the Isle of Man’s Queen’s Pier. It followed the completion of the first stage, bays one to three, last month. The restoration, set to take 16 years, was funded by donations and carried out by the Queen’s Pier Restoration Trust.
Read More

October 2021 – Ramsey Queen’s Pier awarded £50,000 lottery grant
The money was allocated from the government’s Dormant Assets Fund, which is managed by the Manx Lottery Trust. Mr McKenzie said the lottery grant had allowed the volunteer group to pay for the materials needed for bay four “completely”.He said additional funding for the next two bays was being raised through sponsorships of planks and stanchions on each part of the pier, along with donations from private and corporate supporters.
Read More 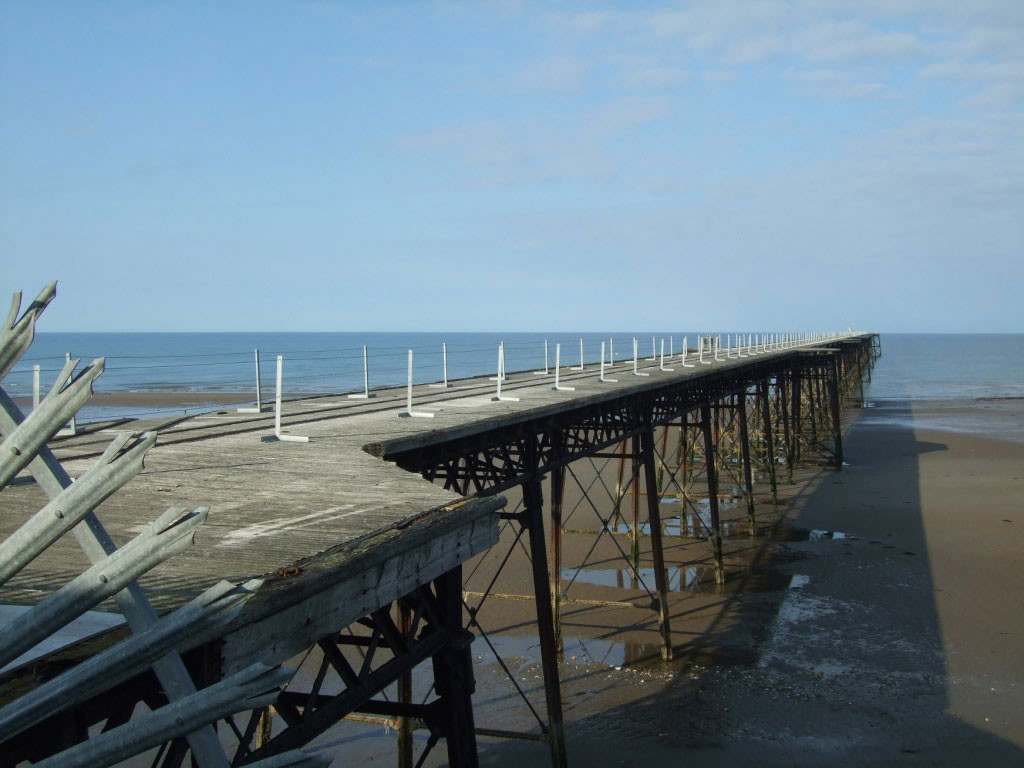 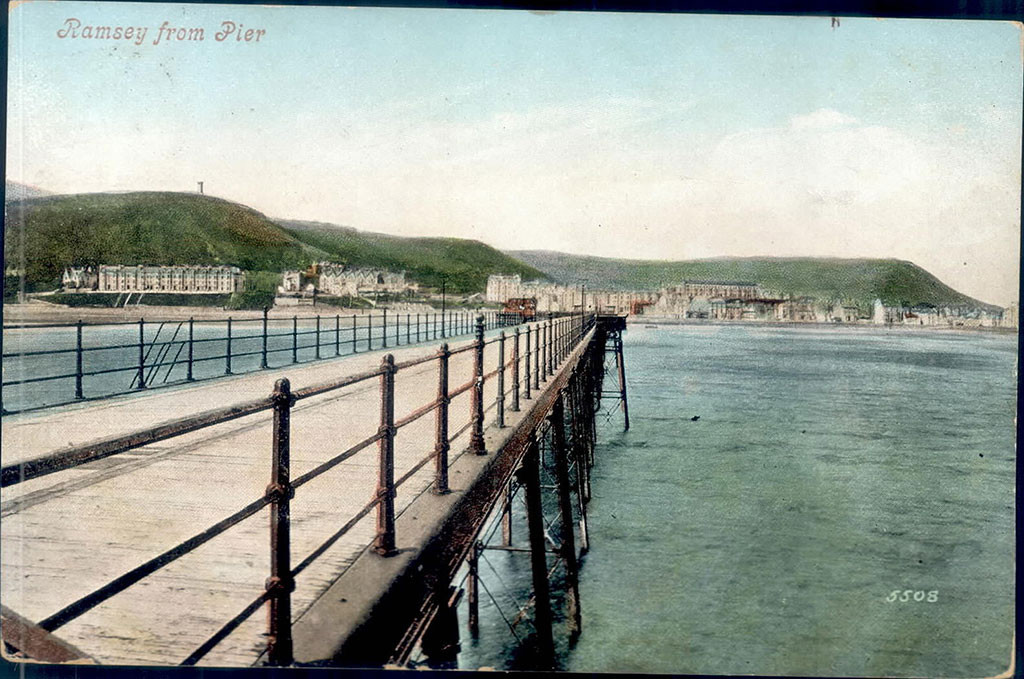 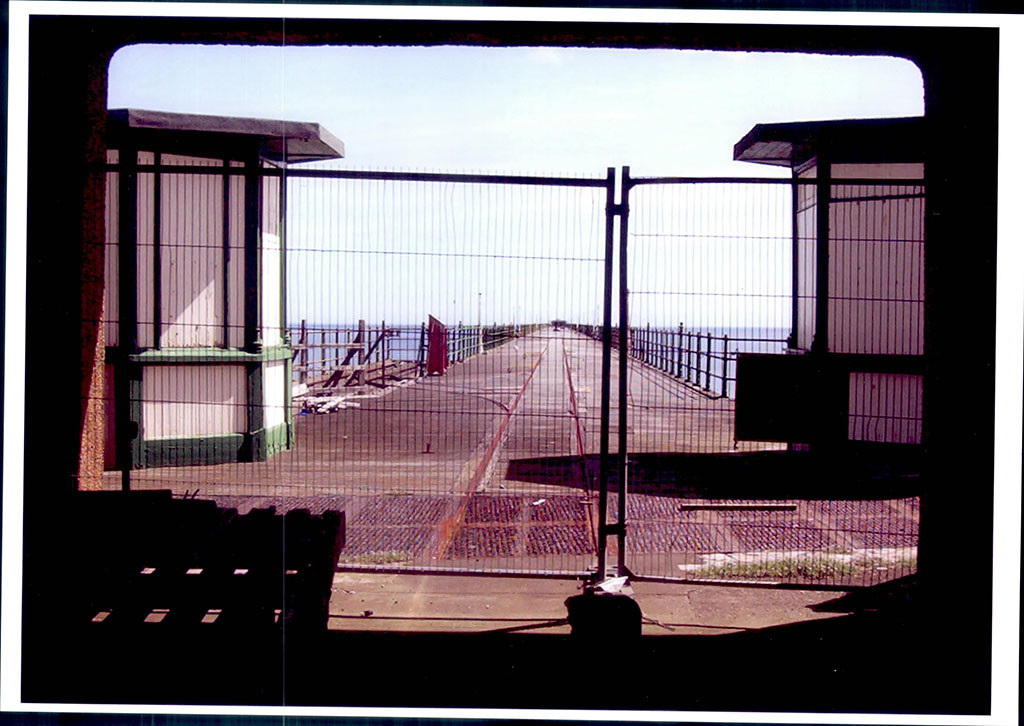 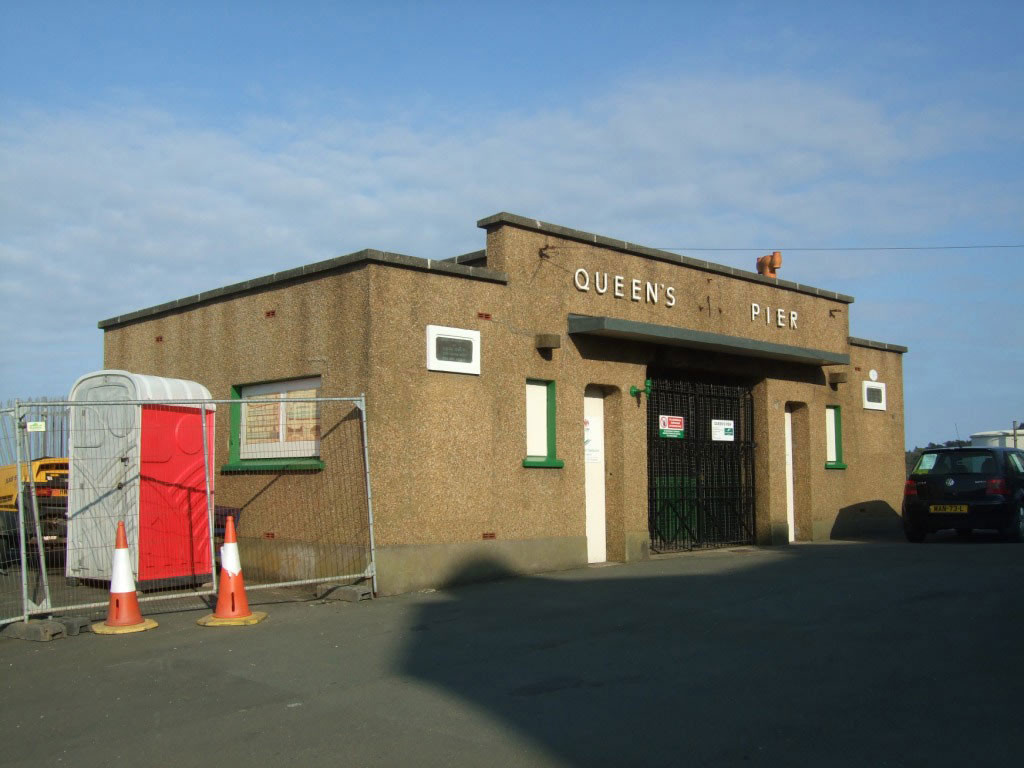 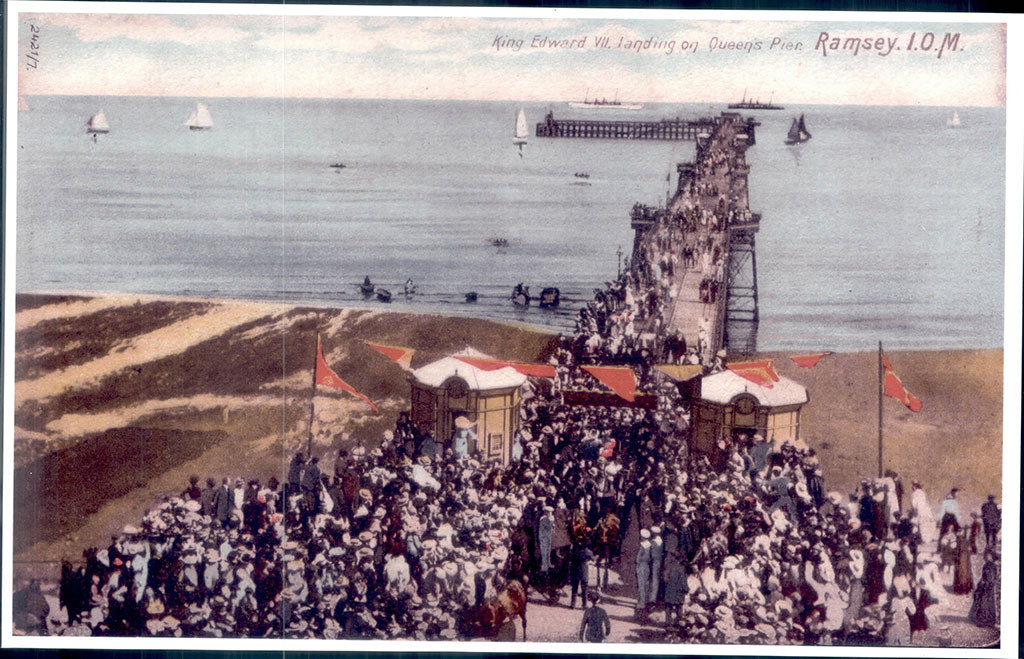