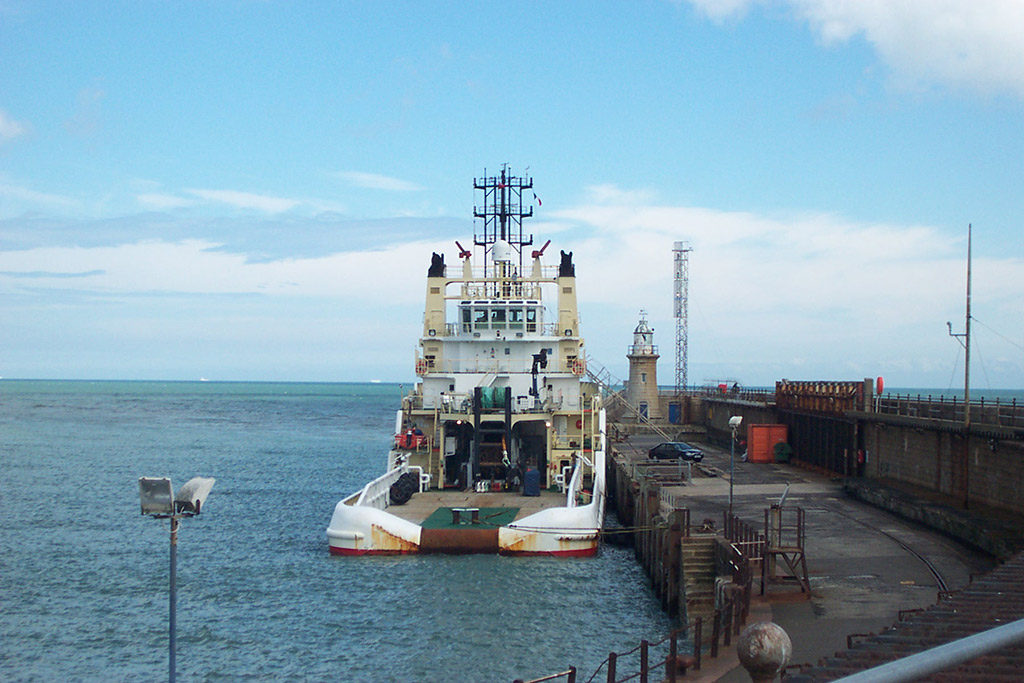 Passenger ferry services from the Folkestone harbour arm had ceased in 1999 having been unable to counter competition from the Channel Tunnel and increased frequency on services from Dover. By December 2010 Folkestone Harbour Company had concluded that alternative uses for the structure needed to be explored and commissioned leading architects Sir Terry Farrell & Partners to draw up a Masterplan for redevelopment of the harbour area. Public consultations took place during 2010 and 2011, with an overwhelming majority supporting the plans. In June 2013 a Planning Inspector’s decision finally put to rest any likelihood of train or ferry services ever being reintroduced from the harbour arm, leaving the way open for a new type of development to proceed. The following month, outline planning permission was received for the redevelopment of the seafront at Folkestone.
A key element of these plans was the opening up of the harbour arm as a public promenade. This involved the clearance of dilapidated warehouses and former ferry and hovercraft terminal buildings, restoration of ironwork and canopies of the original railway platforms and the enabling of public access to the harbour arm. The objective was to reinforce the attractiveness of the harbour area as a place for people to enjoy, with walks along the harbour arm providing panoramic views of the Channel and of Folkestone and its coastline.
The harbour arm had acted as a departure point for millions of troops during the First World War and recognition of this, including the work of the Jeffery sisters who provided a tea stall (the Mole Cafe) for service personnel during the war, would be included in the development.

July 2014 – Folkestone Harbour Arm to become new promenade
Work continued throughout the following year and by July 2014, the dilapidated former warehouses, ticket and administrative offices, had been been demolished and the work moved into the next phase which involved the entire resurfacing of the South Quay and the erection of a safety barrier around the perimeter. Access to the harbour arm would be controlled by gates that could be closed when weather made conditions unsafe.

August 2015 – Renovated Folkestone Harbour Arm opening launches with party weekend
By August 2015, although a lot of work still remained to be done, the £3.5 million project had reached the stage where the public could at last be allowed on to the Harbour arm to see for themselves the progress to date. This was very successful and the structure was opened to the public for a series of open weekends up to the end of October as work continued. A recreation of the Mole Cafe was provided by members of the town’s Step Short project which honours Folkestone’s role in the 1914-18 conflict.

February 2017 – New plans for Folkestone Harbour Station revealed
In February 2017, plans for the next stage of the Folkestone Seafront redevelopment were published. This would see the harbour station renovated, its completion connecting the town centre, Creative Quarter and the hugely popular Harbour Arm.

October 2017 – Folkestone Harbour Arm to open for winter?
In October 2017, it was announced that food and drink outlets might open on the Harbour Arm for the first time during the coming winter.

February 2018 – Folkestone Harbour Arm gets into the swing of things from March 24th!
In February, it was announced that the Harbour Arm would soon be re-opening. Live music and quirky food stalls were planned to line the old pier from Saturday, March 24.

April 2019 – Why Folkestone (and its Harbour Arm) is the coolest seaside town
The old train station, painstakingly refurbished and repurposed as a gorgeous public path to reach the harbour, evokes New York’s High Line; the rejuvenated Harbour Arm (another word for pier), is home to copious street food outlets and quirky restaurants and businesses crammed into old shipping containers. It all points to a place on an upward trajectory.
Read More

May 2020 – Folkestone Harbour Arm reopens with ‘buy as you leave’ restrictions
The recently-renovated walkway closed at the beginning of April following the outbreak of the coronavirus. But now, following the loosening of some lockdown restrictions, it will re-open to those who want a walk and get some fresh air. Two food outlets will also be open for takeaways – Bobbies Bakehouse and the Harbour Coffee Co.
Read More