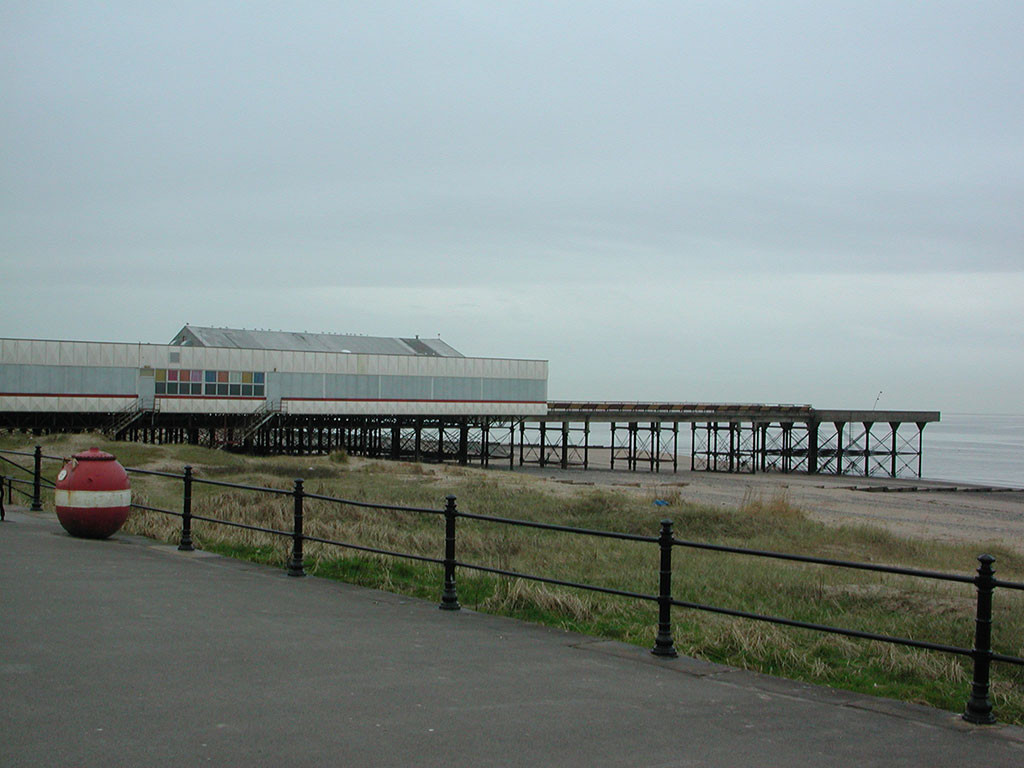 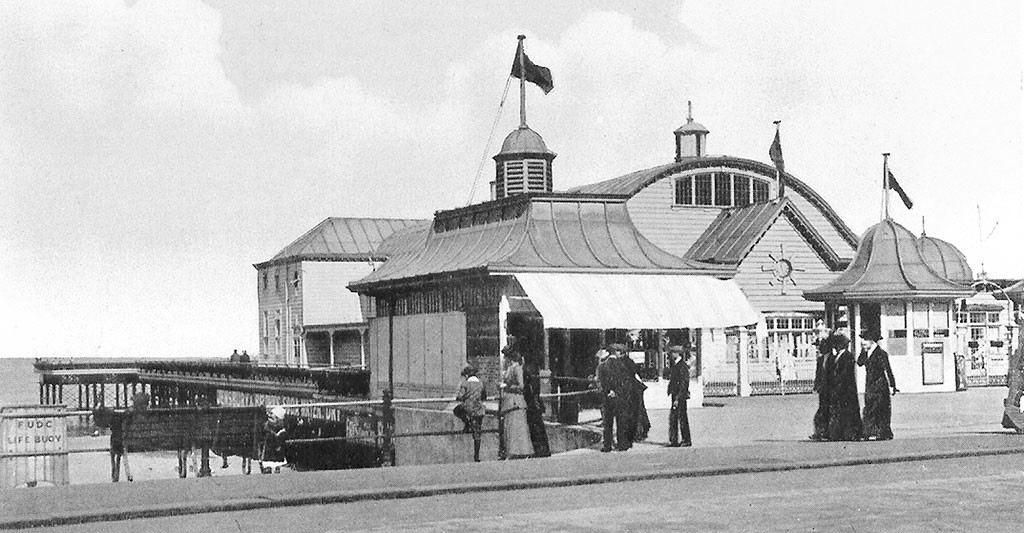 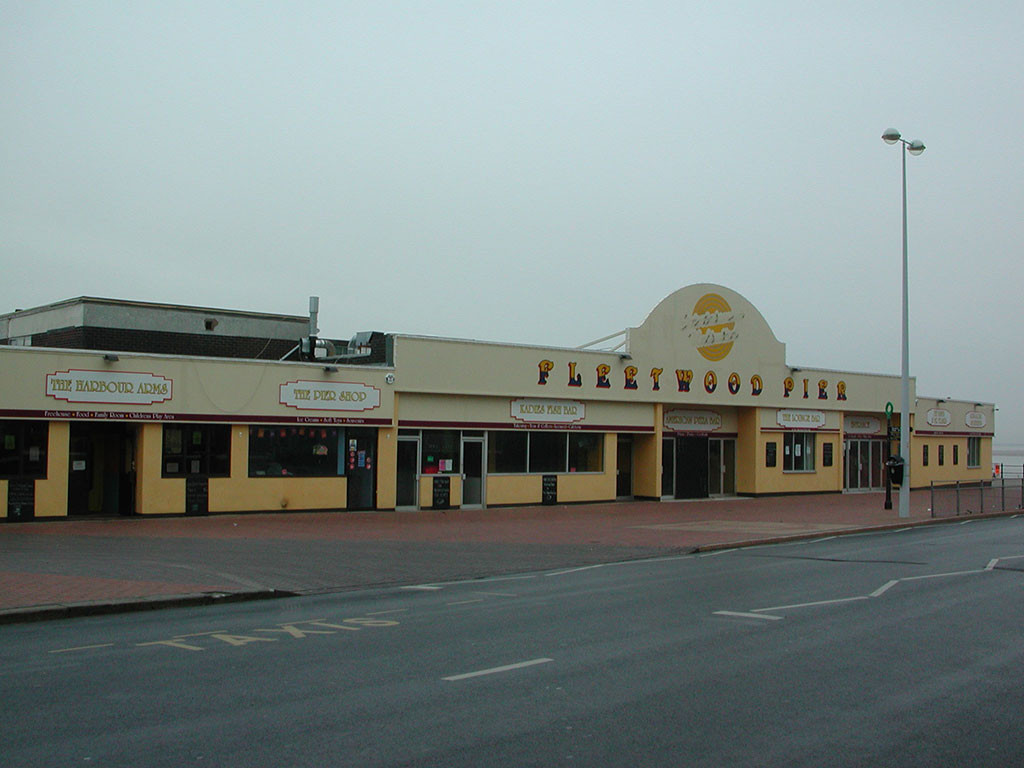 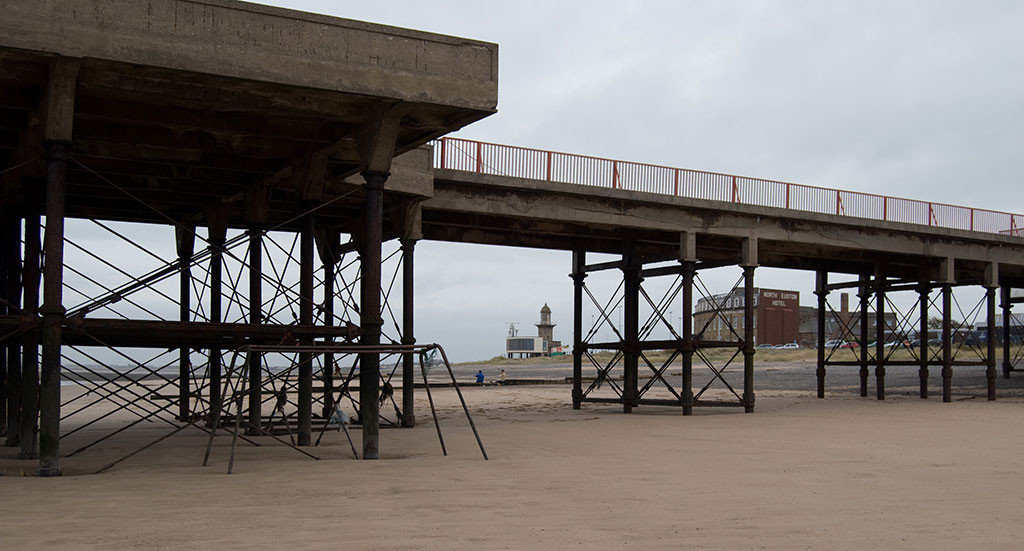 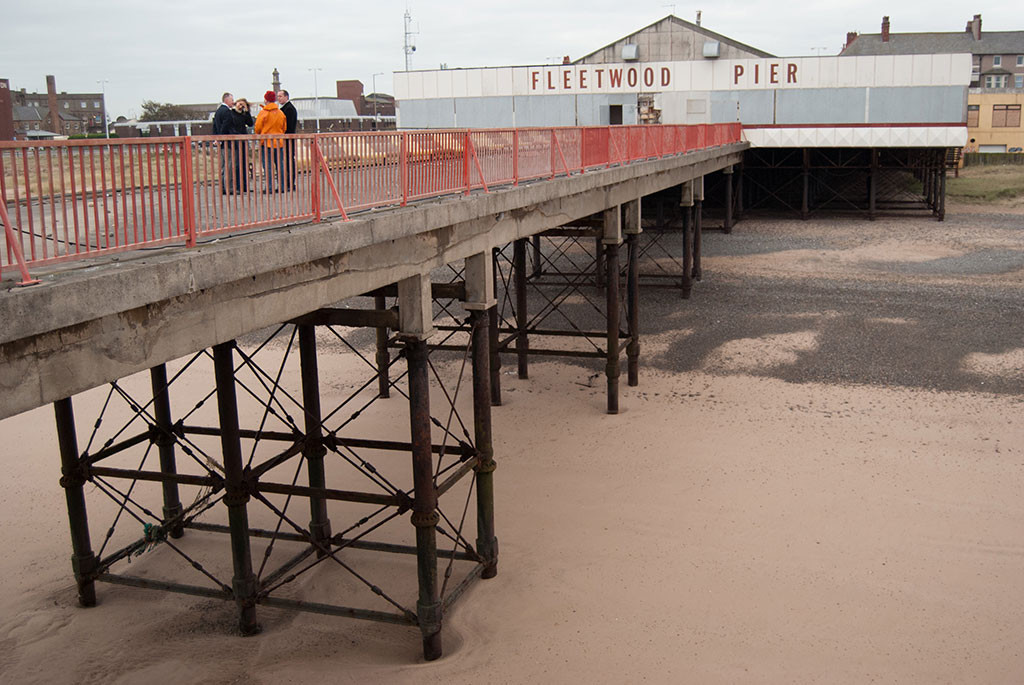 Plans for a pier at Fleetwood were originally proposed by Richard Edmunds in 1892 but were rejected. Revised plans from G.T.Lumb were submitted and approved in 1909. The 492 foot pier opened on Whit Monday 1910. A pavilion was added in 1911 and further improvements took place in 1930 and 1938. A projection room became a pier facility in 1942 and the decking was reconstructed in 1946.

On August 25th 1952, a disastrous fire that could be seen for up to 20 miles, left a tangled network of steel girders and charred beams. Rebuilding the so-called ‘New Super-Pier’ began the following year. The pier had a £70,000 facelift in 1972.

In 2003 the new owners, Persian Leisure, were granted permission to redevelop Fleetwood Pier and by December of the same year it was once again open to the public.

The pier later closed once again for safety reasons and was bought by a local businessman in 2007 who submitted an application to build flats on the pier. A severe fire broke out in the early hours of September 8th 2008. On September 26th 2008, Wyre Borough Council, citing safety concerns, announced that the pier would be completely demolished and on October 10th 2008, the Council confirmed that the pier would not be rebuilt.

May 2016 – Neighbours attack plan for apartments at pier site
In June 2013, Wyre Council granted planning permission to developers, Simmo Developments, for an 18-bed hotel on the site of the Fleetwood pier which burned down in 2008. However, in May 2016 it was reported that a different project was being proposed. This was a block of apartments to be constructed for the over-55 age group, comprising underground parking for 17 vehicles and opportunities for retail space, plus the construction of a new pier to allow for a bigger building. But objections were raised by some local residents who claimed that the apartments would be an eyesore and not in keeping with the area. It was further claimed that the site should have been used to replace the old pier on a like for like basis.

June 2016 – Council fears seafront plan could set worrying precedent
Then in June 2016, following over 140 objections to the apartments plan, Fleetwood Town Council launched its own objection to the scheme, stating that they feared a precedent would be set for other developers to build on the beach side of Fleetwood seafront if the project went ahead.
Coun Mike Barrowclough, vice chairman of Fleetwood Town Council, said: “As a council, we are standing up for the people of Fleetwood who have made it clear they do not want to see any kind of building on our unspoilt seafront, which has lovely view over Morecambe Bay.”

August 2016 – Remembering the 1952 fire at Fleetwood Pier
In August 2016, the Gazette published a series of pictures of the catastrophic fire which engulfed Fleetwood Pier in 1952 was so fierce it was reportedly seen up to 20 miles away, in Barrow, across Morecambe Bay.

December 2016 – Delays in the redevelopment of Fleetwood Pier
December 2016 brought the announcement that the £3.5 million plan to redevelop Fleetwood Pier would be delayed as it would not be considered by the local authority planners until 2017. The proposal by Consortium Simmo, headed by businessman Mike Simmons (aka comedian Joey Blower) was to build 15 ultra modern apartments, aimed at the over 55s, on the site which it was leasing from Wyre Council.

January 2017 – Fleetwood Pier scheme rejected by planners
In January 2017, the scheme by Simmo Developments to create a dramatic art-deco style building housing 15 apartments for the over-55s and retail units on the former Fleetwood Pier site was rejected by Wyre Council. The Council rejected the scheme on the grounds that its height, scale, mass, design and appearance would be out of keeping with its surroundings.

July 2017 – Fleetwood Pier site plans approved.
Despite there having been 1,100 objections to the scheme, in July 2017 approval was given for the development of 15 apartments for the over-55s in an art deco-style building in curved glass and steel, with retail units, on the site of the old Fleetwood Pier.