Work on the 1115 foot pier, designed by Eugenius Birch started in 1863. The cost was £30,000 and it opened on October 5th 1866. The southern end pavilion was constructed in 1893 but was rebuilt and and enlarged two years later. In 1896, landing stages were constructed. These were extended in 1901. A bandstand, halfway along was removed in 1916 and this part of the pier was widened and a Concert Hall added. A new top-deck entrance was added in 1932.
The seaward end closed in October 1970. Consent for demolition was given by the Department of the Environment, subject to the approval of Brighton Council. In 1974, the ‘We Want The West Pier’ (WWWP) was formed under John Lloyd and, as a result, the council adopted a ‘wait and see’ policy, deferring demolition. Owners AVP Industries closed the entire pier in 1975, but the council refused to buy it.
Receivers were appointed in 1977 and, in 1984, the ‘Brighton West Pier Trust’ (successors to WWWP) bought the pier from the Commissioners for £100. Work began on Britain’s only Grade I listed pier but storms in 1987 and 1988 caused damage to a 110 foot section which had to be removed, thus isolating the Concert Hall and pavilion. The Trust entered into contract with Merlin International Properties (UK) Ltd, but repair work stopped in December 1989. Merlin pulled out in 1991 and a revitalised Trust under new leadership reverted to their original aims.
On August 6th 1996, an initial grant of £968,000 was awarded from the Heritage Lottery Fund and the following month a steel walkway was built reconnecting the isolated section to the shore. After some hesitation, a further £10.65 million was committed in March 1998 with £3 million earmarked for work on the superstructure. Private finance was being supplied by London & Regional Properties and Mr Oliver Peyton. The pier was eventually opened to visitors on special organised tours.
However, a series of disasters overtook the pier. Storms in late 2002 and early 2003 caused part of the pier and concert hall to collapse. Then in March 2003, the pavilion and further sections of the pier were destroyed by a massive fire. This was followed only two months later in May 2003 by a further fire which reduced the concert hall to a burnt out shell, which itself later collapsed into the sea during a storm the following year.
Despite the fact that the pier was now virtually just a bare framework, the Brighton West Pier Trust persevered in its efforts to save the pier, not helped by the withdrawal of funding by HLF and English Heritage.
Then, in October 2006, plans were announced to build the ‘Brighton i360’, a 500 foot high tower with a viewing platform effectively creating a ‘pier in the sky’. This would also be accompanied by a partial rebuild of the West pier. Building was due to start in July 2007 but the global collapse in available credit saw its construction pushed back and back, and by the beginning of 2012 the project was still on hold with a £17million shortfall of the full £35million total requirement. Eventually in July 2012, Brighton & Hove Council agreed a loan of £14million to the project developers, Marks Barfield, with a further £3million loan pledged from the Coast to Capital Local Enterprise Partnership. Construction of the tower was anticipated to commence in Autumn 2012 with completion by early 2015.
Meanwhile, in February 2012, Sussex business man, Mike Holland, revealed plans to reconstruct the West Pier itself in time for its 150th anniversary in 2016. The pier’s owners, the West Pier Trust, expressed skepticism of the propoals and said that they were committed to delivering the i360 project first, although i360 is not in any sense a pier. And in March 2012, Mr Holland withdrew his proposal.

In January 2013, more of the derelict West Pier crumbled into the sea as a result of the cold weather conditions.

July 2013 – Original West Pier design drawing goes on sale
A little piece of pier history appeared on Ebay for sale in July 2013 when the original architect’s design of West Pier’s concert hall, showing the detailed colour plans of the 1916 edition to the Grade I listed pier, went on sale. The purchaser was unknown.

November 2013 – West Pier plans go back to the drawing board
In November 2013, West Pier Trust announced that they were looking for new ideas to rescue the ruined West Pier and were drawing up a brief for designers to submit fresh plans to save the structure. Simultaneously, confidence was expressed that the i360 Tower project would go ahead as planned.

May 2015 – Visual artists pay tribute to Brighton’s West Pier
And in May 2015, a light show called Fleeting was created by the artist group ‘And Now’ to close the Brighton Festival with a sea of torches lighting up the beach with fireworks mimicking starlings at the West Pier.

June 2016 – Final fragments of Brighton West Pier to go on sale
In June 2016, it was announced that the sale of the final fragments of the pier would take place at the beginning of July. West Pier Trust said that the remaining fragments – from the old tollbooths – were too unstable to be incorporated in the new building on the i360 site.

June 2016 – Amazing time travel video of Brighton West Pier
Later in the month, a photographer known as the Time Travel Artist published a video showing the West Pier in Brighton morph from its present skeleton to its original glory – and back again.

September 2016 – Series of events to celebrate Brighton West Pier’s 150th anniversary
In September 2016, it was announced that a series of events to mark the now completely derelict pier’s 150th anniversary was being planned.The events were reported as including talks by broadcaster Joan Bakewell, author Peter James and Coast presenter Nick Crane.

October 2016 – An intriguing look-back at the West Pier fire of 2003
The fluttering wings of starlings were the first signs something was wrong over the West Pier on the morning of March 28, 2003.

October 2016 – No hope of saving skeletal retttmains
October 2016 saw the announcement by the Brighton West Pier Trust that there was no longer any possibility of saving the now skeletal remains of the pier as the project would be too expensive and sufficient funding was not available.

March 2017 – Brighton residents attempt to recreate the West Pier in knitted form!
March 2017 saw people in Brighton and Hove being encouraged to help knit a huge mosaic of the West Pier. The mosaic would be made up of dozens of coloured knitted squares and the finished artwork would go on display on the side of a double decker bus.

April 2017 – New Chair for West Pier Trust
In April 2017, Professor Michael Farthing, former Vice Chancellor of the University of Sussex, took over the chairmanship of the West Pier Trust from Glynn Jones, who had been chairman for the previous 12 years. It was reported that Prof Farthing would be helping the trust move to a new seafront office and developing a new programme of fundraising over the next ten years.

September 2017 – West Pier Centre opens with photography exhibition
September 2017 saw the opening of the new West Pier Centre, from where the West Pier Trust would be operating in future. It was anticipated that the centre would attract more than 10 million tourists per year, and would offer information to visitors as well as acting as a shop, gallery and place for local events. The opening was marked by an exhibition of photographs by Roger Bamber formerly a photographer for the Guardian newspaper.

October 2017 – Restoration of West Pier kiosk begins
In October 2017, the West Pier Trust announced plans to restore an 1866 octagonal kiosk recovered from the pier in 1996, and reinstate it on the seafront as part of the landscaping east of the i360 tower. The kiosk would complete the West Pier themed area which already included a golden spiral created from pier columns and the pier tollbooths at the entrance to the tower.

October 2017 – Interesting designs for a ‘sporty’ West Pier
Architecture graduate Nicolas Barthomeuf designed a pier filled with modern sports facilities, including a 400m running track, a 250m velodrome, a 50m swimming pool filled with seawater and even a concert hall at the end of the structure.

November 2017 – A look-back at the campaign to save Brighton’s West Pier
In November 2017, the Brighton Argus website carried an article on the campaigns to save the West Pier. The campaigns drew many high-profile supporters, including actor John Mills shown in the article in front of a banner emblazoned with the words “Oh, wot a luvly pier”.

February 2018 – West Pier the unexpected star of the show at Brit awards!
In February 2018, the Brighton Argus published an article on Misty Buckley, the woman behind the West Pier structure that Rag ’n’ Bone Man sang in front of at the Brit awards. She revealed the “tragic” moment that inspired her brilliant creation.

February 2019 – West Pier relics go up for sale!
Pieces of the old West Pier were set to go to auction on March 2. The sale was taking place at the West Pier Centre on Kings Road, between 1pm and 5pm, and funds raised would go towards restoring an octagonal kiosk that was part of the West Pier.
Read More

June 2019 – Plans for restored West Pier kiosk revealed
The West Pier Trust asked Brighton and Hove City Council for permission to site the kiosk, which it said was the world’s oldest surviving pleasure pier building, to the east of the i360 at beach level. The trust said they will use original cast iron fixings from about one and a half kiosks which were in storage in Horsham after being dismantled in 1996.
Read More

October 2019 – Your memories of West Pier needed for new film
The West Pier Trust began collating memories and stories of the grade 1 listed structure to capture its heritage and to share the strong role it has played in the lives of Brighton and Hove residents. Rachel Clark, WPT chief executive, said: “It is really important that we capture significant memories and stories to put the pier in context for the next generation”.
Read More

November 2020 – Brighton West Pier features on Historic England’s annual ‘at risk’ list
The West Pier, brainchild of architect Eugenius Birch in 1864, was on the ‘at risk’ list though Historic England recognised the site was in “very bad” condition. It followed a fire which ripped through the site in 2003. As a result, the heritage group conceded that “the combination of significant damage and cost of repair make restoration from public funds uneconomic”.
Read More

March 2021 – West Pier relic goes under the hammer on eBay
A piece of the now ruined West Pier became available on the online marketplace for a “buy it now” price of £850. In a description of the item, the current owner said: “What a piece of history. A surviving column that once stood as part of the famous Brighton West Pier since 1866. This column formed the support for the glass windows that made the windbreak in the rotunda right on the end of the pier. This really is very special. It is rare to have a whole complete column, and a lovely addition is that it still has the original putty and the odd pieces of sea-etched glass still intact”.
Read More

March 2021 – Anniversary of Brighton’s West Pier fire
It was 18 years ago on March 28, 2003, that flames tore through the Grand Old Lady, sealing her fate forever. Horrified crowds gathered on the beach to watch as it burned. Arsonists were to blame but fire service officials said they would not risk lives by putting investigators on the site and so the truth about what happened has never been revealed.
Read More 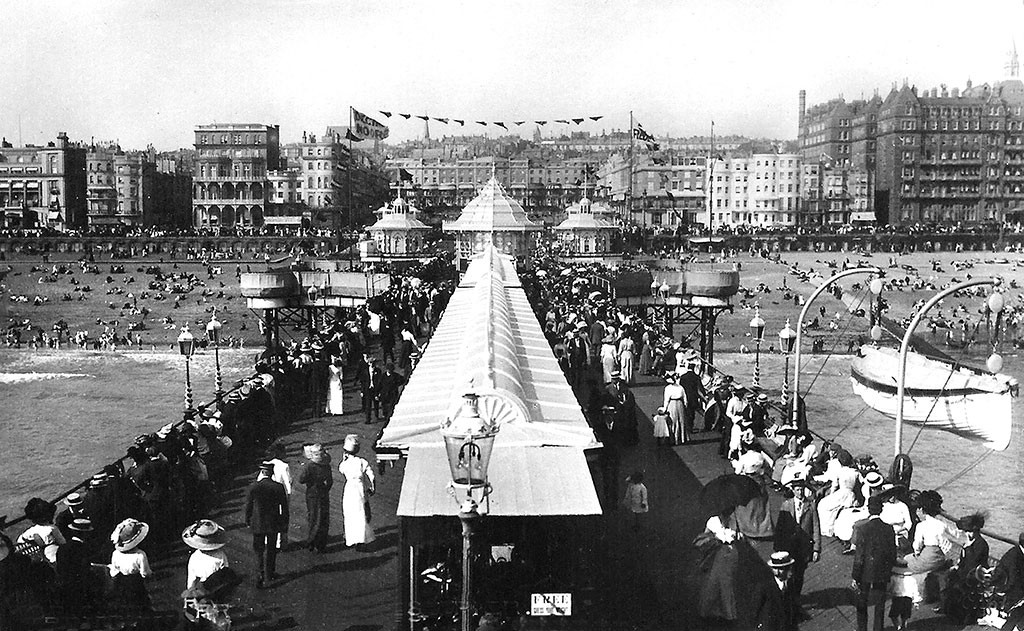 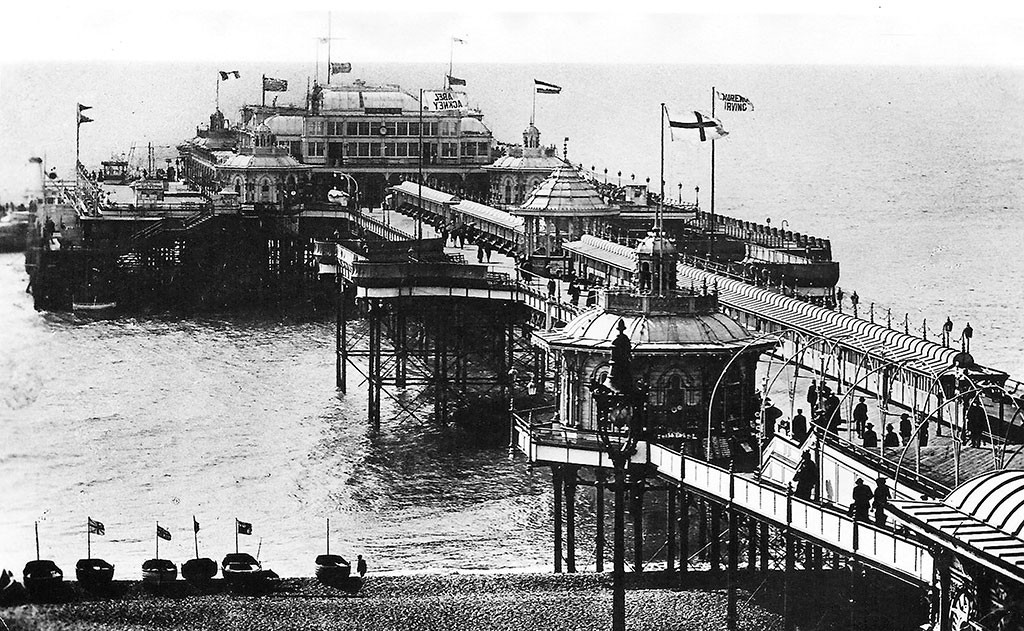 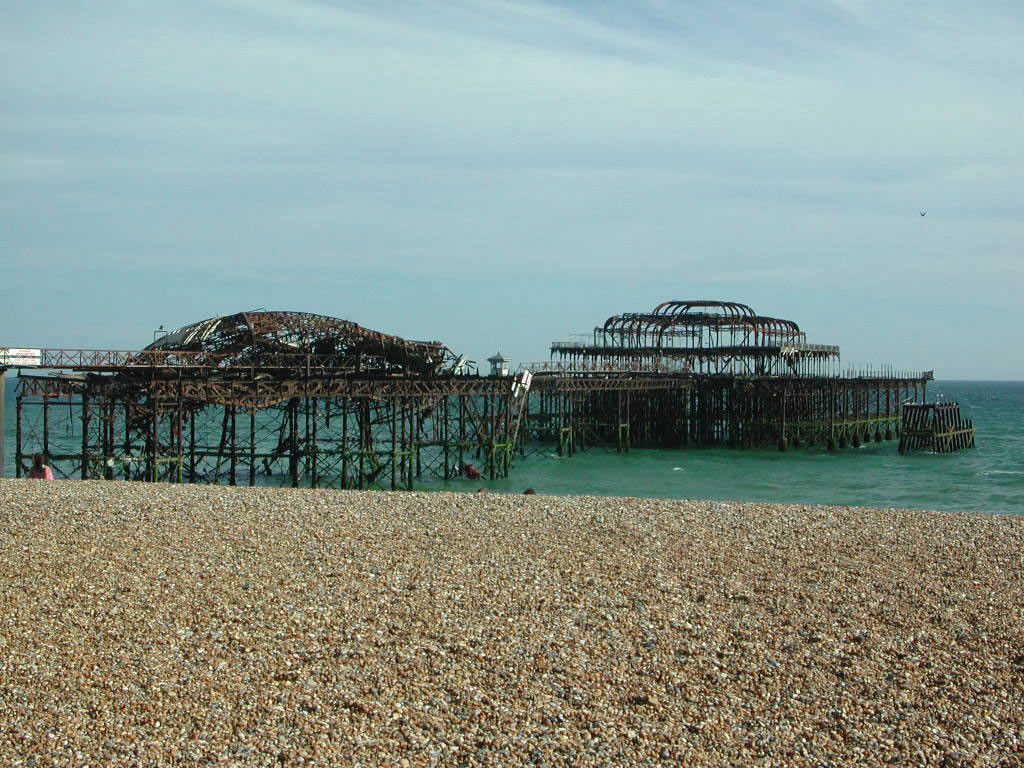 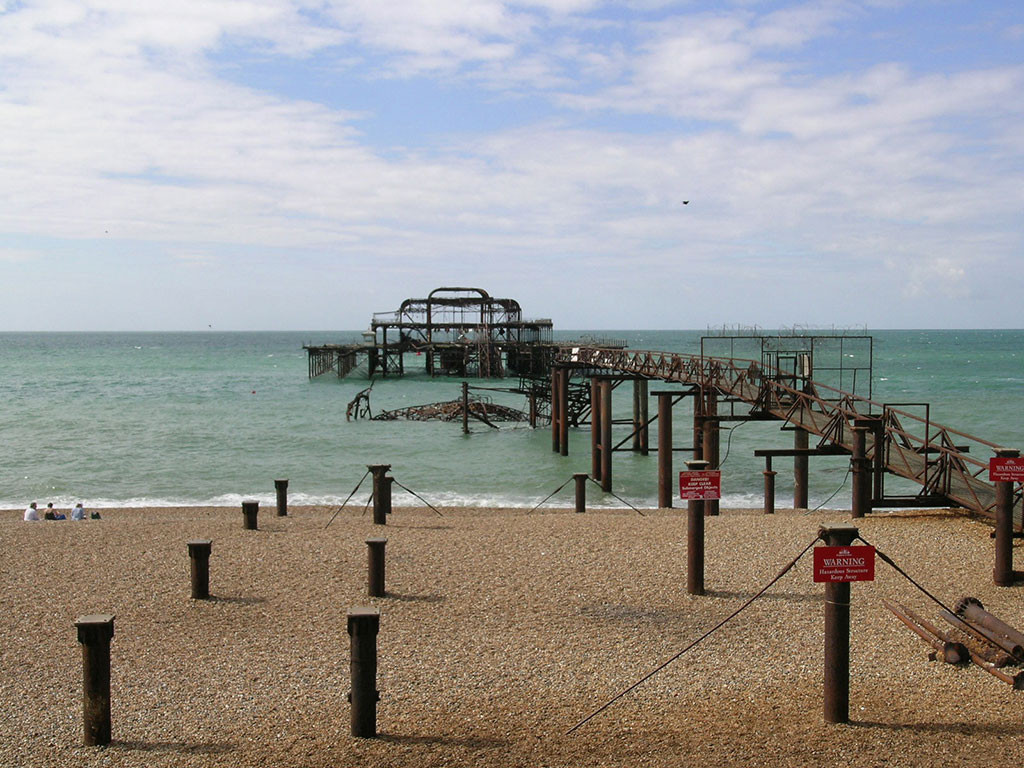