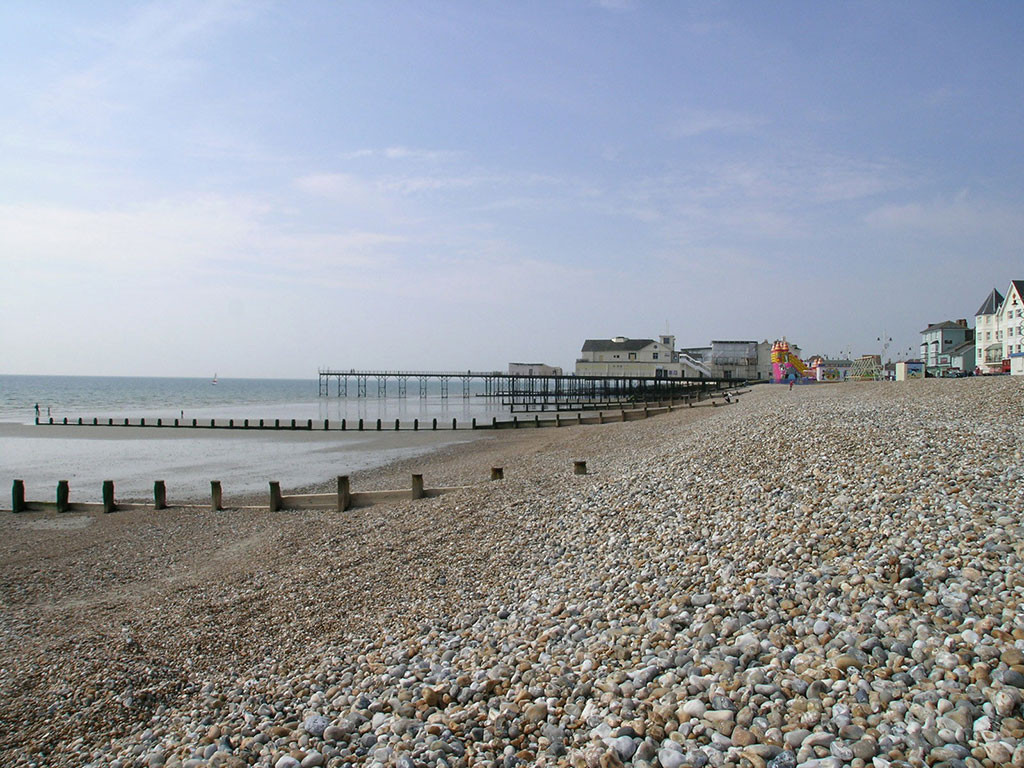 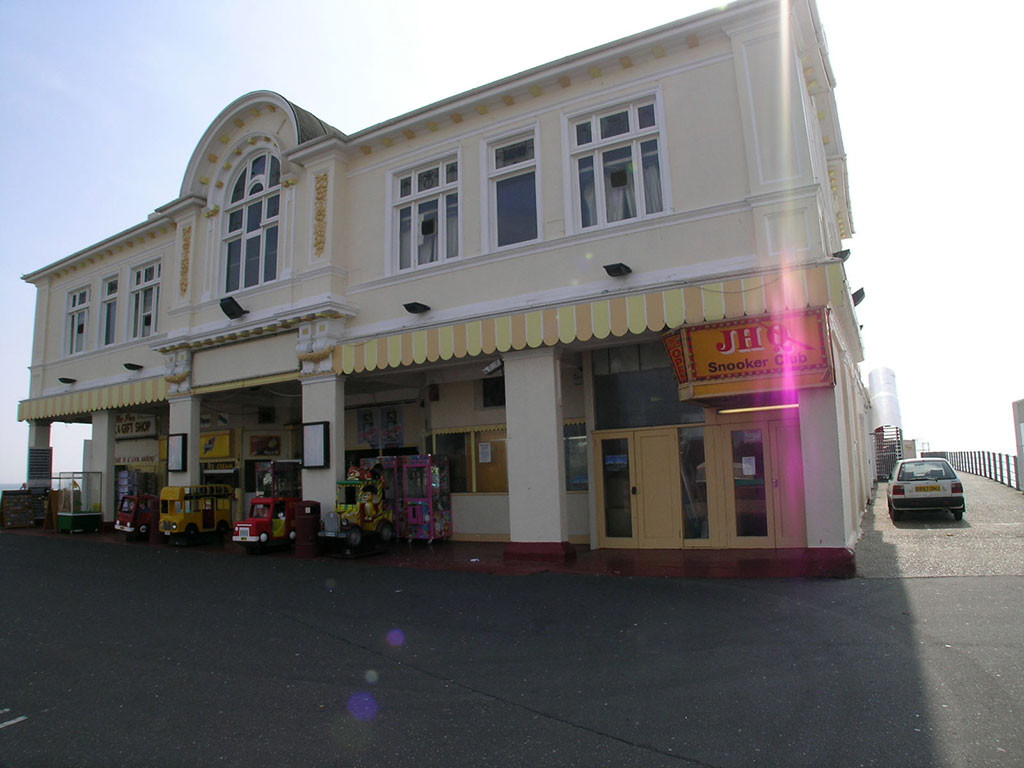 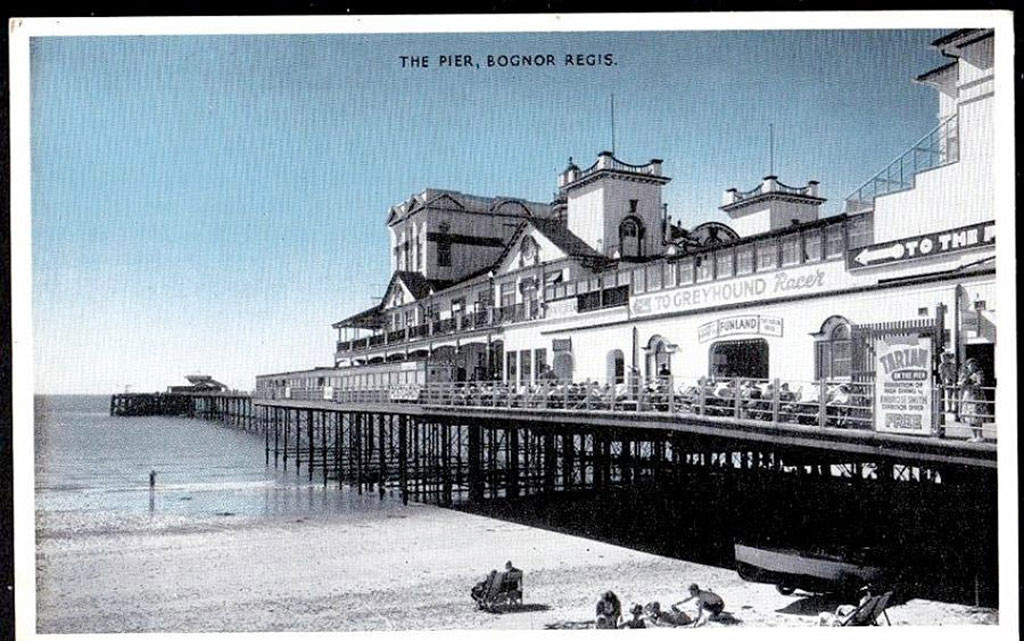 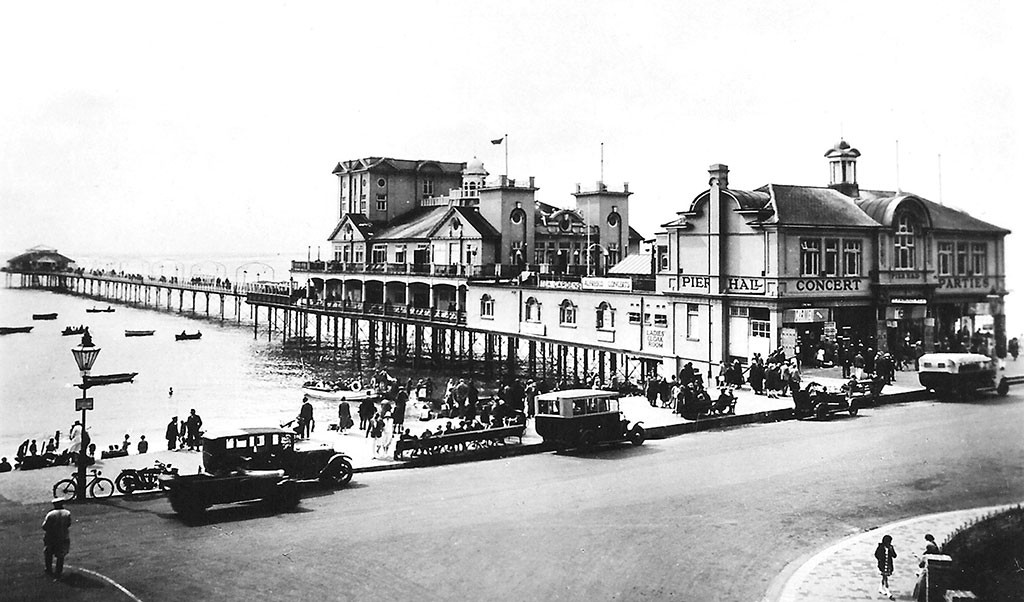 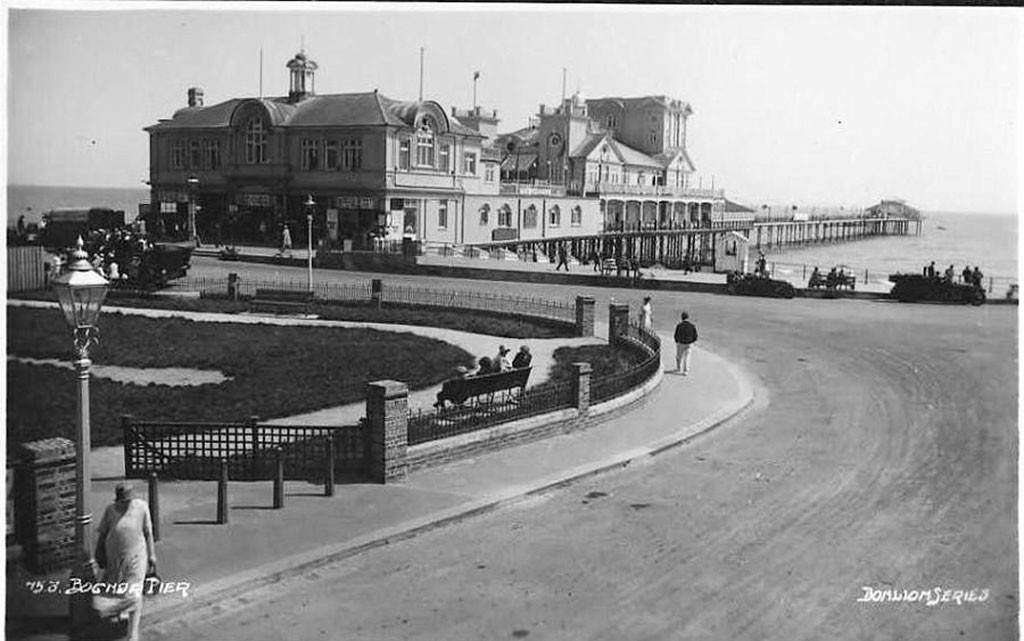 When the pier became dangerous, it was sold privately, in 1909, on condition that repairs were carried out. In 1910/11, the new owners built a £30,000 complex at the shoreward end which contained a cinema, an arcade, a roof garden restaurant and a theatre (which opened on August Bank Holiday, 1912).

In World War One, 200 men were billeted here and in World War Two the pier became HMS St Barbara, an RN observation station.

Storm damage in 1964 and 1965 caused the pavilion to sink into the sea. The pier was sold in 1966 to the British American Novelty (Pier) Company for £35,000 but, after two fires in three months, it closed in December 1974 and was eventually sold to J.Harrison (Automatics) Ltd.

By 1992, its condition was very poor and restoration costs were estimated at a minimum of £500,000. In 1994, an application was made to demolish the decaying seaward end.

In 1995, a new company was formed to bid for National Lottery funding. John Ayers became owner in 1996 and, in 1997, it was reported that he was prepared to commit £576,000 (one quarter of the total estimated repair bill) towards re-development. However, the rejection of the bid (in March 1998) put the derelict seaward end at great risk of demolition.

On 27 June 2010 the Royal Air Force Association marked Armed Forces Day by erecting a plaque on Bognor Regis pier commemorating its use as a naval station, HMS St Barbara, during World War II. The flag now hangs in the RAFA building in Waterloo Square facing the pier. Click here for photographs of the event.

Each year, up to 2008, the pier hosted the annual Birdman Rally. However, following the removal of sixty feet of the remaining decking at the end of the pier on safety grounds, the event was transferred to Worthing. However, in 2010, despite initial concerns about the depth of water, the event returned to Bognor and there are now annual events at both Bognor and Worthing.

In August 2011 a fire in a storage unit at the end of the pier caused several thousand pounds worth of damage.

The International Birdman competition returned for a second time in September 2011 after high winds and a choppy sea stopped flying in July. It was back again in 2012 and 2013.

In July 2013, it was reported that Bognor Regis Town Council was aiming to submit a Heritage Lottery bid for up to £5m for the historic seafront structure and the Picturedrome cinema. And in August 2013, the town mayor called for the whole town to support the bid.
In September 2013, the Bognor Pier Trust, chaired by the mayor, was formed with the hope of taking ownership of the pier, with the support of the then owner John Ayers.
Heritage experts began assessing the Pier and Picturedrome bid in November 2013 and in December 2013, the local MP leant his support to the Trust’s project.
Fund raising activities began in earnest in February 2014 as enthusiasm for the project developed., and in April 2014, it was reported that Jess Steele, the fund raising expert that had assisted the Hastings Pier project, was being employed by the Trust.

October 2014 – Pier Trust aims to expand its activities
October brought renewed efforts from the Bognor Pier Trust to involve the local community in its efforts to restore the pier. Anyone joining the Friends of Bognor Regis Pier would receive a regular email newsletter and invitations to events.

February 2015 – Pier Trust to seek lottery’s backing
In February 2015, the Pier Trust announced that they would be submitting a bid to the lottery fund’s Heritage Enterprise scheme, a scheme aimed at privately owned buildings of special importance. The scheme is capped at £5m and requires successful bidders to provide at least ten per cent of the funding for their project. The grant if successful would be used by the trust to repair the pier’s sub-structure, decking and railings, and for a new building for community use.

March 2015 – Local backing for Friends of Bognor Regis Pier
The following month, scores of people gave their support to the funding bid at a Friends of the Pier stall in Bognor town centre. Friends’ chairman Jan Malpas said local support was essential to show the Heritage Lottery Fund the strong level of community participation in backing the bid.

April 2015 – Trust take first steps towards Heritage Enterprise bid
The Trust announced their hope to have a new visitor centre open on the pier by 4th May as part of the 150th anniversary of the building of the pier. The visitor centre would allow the community to find out more about the work of the Trust and the bid that would be submitted.

July 2015 – Bognor Regis successful on their CCF Bid
In July 2015, Bognor Regis was among more than 100 coastal towns to be been handed a £10,000 government grant. Bognor Pier Trust worked with Arun District Council to launch the successful bid for a Coastal CommunOctober 2017 – New memorial unveiled at Bognor Regis Pierity Fund grant, part of which could be spent on restoration work on Bognor Pier.

December 2015 – Pier Trust receives a slice of Coastal Revival funding
And in December 2015, Arun District Council was successful in its bid for £50,000 from the Coastal Revival Fund which would enable Bognor Regis to fund a new ‘heritage quarter’ and enable Bognor Pier Trust to commission services to make a bid to the Heritage Lottery Fund to bring the listed structure up to modern standards.

March 2016 – MP backs Pier Trust in funding bid quest
MP Nick Gibb met Bognor Pier Trust committee members in March 2016 to find out more about the Trust’s work to secure £5m from the Heritage Lottery Fund. The Trust, together with pier owner John Ayers, was working to secure funding to prevent any further damage to the pier’s structure and restore it to its former glory.

January 2017 – Pier Trust to use skills to help other projects
Following the disappointing decision in October by Bognor Pier Leisure Limited not to support the Trust’s Heritage Lottery Bid, the Trust decided to review its strategy and objectives to look at transferring the skills it had acquired to other potential heritage and community projects in the town. It also decided that if the current owner was to sell the pier in the future, they would consider making an offer for it.

August 2017 – Winner soars at Bognor birdman
August 2017 welcomed back the Bognor Birdman competition for human powered flying machines held each summer in the town. Entrants ranged from professionally engineered craft to more humorous designs the main purpose of which was to raise money for charity rather than a serious aim to fly much further than a few feet off the end of the pier.

October 2017 – New memorial unveiled at Bognor Regis Pier
In October 2017, a new memorial dedicated to HMS St Barbara wasn unveiled at Bognor Regis pier with the backing of the town’s prominent business, Reynolds. The event commemorated the time when the pier hosted a training school as a branch of the Royal Navy’s gunnery training establishment, HMS Excellent in Portsmouth’s Whale Island. It was commissioned on the pier as an anti-aircraft firing range and gunnery training school for naval personnel.

March 2019 – An interesting review of the many different designs for Bognor Regis Pier over the years
Peter Burrell looked into the pier’s history with his take on the pier as it was in 1936 while cartoonist Mike Jupp showed off some slightly more futuristic ideas.
Read More

July 2019 – Bognor Regis Pier blue plaque celebrates local heroine
A blue plaque honouring a life-saving bathing machine operator was proposed to be placed on the pier in Bognor Regis. Mary Wheatland, known as the mermaid of Bognor, not only tended the machines – beach huts which could be rolled into the water – she taught children to swim and saved some 30 lives.

August 2019 – Plans are already afoot for Bognor Birdman in 2020
In August, organisers of the International Bognor Birdman said they ‘ran out of time’ to meet the requirements to run the 2019 event but insisted it will go ahead next year as they had learned from their mistakes.

September 2019 – The UK’s ‘first ever’ Pride on the Pier a great success!
Hundreds of people turned out in Bognor for the ‘UK’s first ever’ Pride Party on the Pier over the weekend. The Pier Party was organised following the cancellation of Bognor Birdman, planned for September 1 as part of the town’s new Pride event.
Read More