The pier was damaged in 1867 by wreckage from Nelson’s former flagship, the ‘Foudroyant’, which had been moored off the pier for an exhibition. In the 1870s, the pier-head was enlarged and the Indian Pavilion and bandstand were built. There were further ship collisions with the pier in 1892 and 1897

The deck was widened in 1896, and shops and an arcade were added to the shoreward end in 1903.

In the 1960s, amusements and the Merrie England bar were opened. In the 1980s, £350,000 was spent rebuilding the entrance in Victorian style, and in 1991, a 35 foot carousel and a pier tramway were installed. There were helicopter rides from the jetty, which re-opened in 1991 after severe storm damage in 1987. Leisure excursions resumed in September 1992 when MV Balmoral called at the jetty.

The pier suffered further, severe storm damage in December 1997, severing the jetty from the main structure and leaving the pier theatre perilously close to the edge. The owners did not propose to repair the damage, instead pledging £1,000,000 towards general improvement of this listed structure.

The North Pier still had much to offer, from its majestic theatre and the beautiful Carousel bar, through the Sunlight Lounge and traditional carousel ride, right up to the top of the pier with its arcade amusements and Merrie England Bar.

April 2011 – Blackpool North Pier sold to local family company
In April 2011, the pier was sold by Six Piers Ltd to Blackpool family firm, Sedgwick’s, which also owned amusement arcades and the big wheel on Blackpool’s Central Pier. Mr Sedgwick vowed to restore the pier to its former Victorian look, bring back its tram and remove the entrance tolls.

In September 2011, the theatre was closed and the summer show cancelled to enable the backstage renovation work and modernisation of dressing rooms and windows to begin. Work was completed and the theatre relaunched in November 2011.

May 2013 – New digital display screen celebrates North Pier’s 150th birthday
In May 2013, the pier celebrated its 150th anniversary. The pier was first opened on May 21st 1863 and is the oldest of Blackpool’s three piers. To mark the occasion a new state-of-the-art digital display screen to show images of the pier throughout its history was installed at the front of the pier.

December 2013 – Storm damage could cost millions to repair
In December 2013, violent storms caused serious damage to the pier causing decking to be broken, windows smashed and pylons to be snapped. The damage was estimated to be in the millions of pounds and the seaward end of the pier had to be closed.

January 2014 – Pier’s £1m rescue mission underway
In January 2014, it was reported that the extensive repairs to the storm damaged pier were progressing well. The boardwalk, windows and the Sunset Lounge had been ripped apart by severe winds. The pier had been closed from December 5th but had now been partially opened to fishermen.

Repairs were finally completed at the end of March 2014 ready for it to be reopened to the public in early April.

May 2014 – Could be biggest year yet for restored pier
After being severely damaged by the storm at the end of 2013, the pier management were forecasting a bumper year for the pier. £600,000 worth of improvements had been made and a full summer of shows was planned in the theatre.

August 2015 – North Pier’s owner says ‘Blackpool’s on the up!’
In an article in August 2015, Peter Sedgwick, the owner of Blackpool’s North Pier, gave a spirited defence of the resort. Whilst admitting that there are still parts of the town that needed work, he cited the Prom, new trams, the refurbished Tower and the fantastic shows being put of at the Winter Gardens as evidence of the progress Blackpool is making.

January 2017 – Did Bob Dylan paint Blackpool North Pier?
A remarkable likeness between a painting by the famous singer, Bob Dylan, and a photograph taken by someone under the pseudonym Diamond Geezer led to an interesting controversy around the pier. The photographe said: “I’d be intrigued to know why he picked this image in the first place, whether he knew it was of Blackpool, and how it came to be attributed to a pier on the east coast of America.

April 2017 – Investment in Blackpool North Pier continues
In October 2017, it was reported that £300,000 had been invested during the winter by Blackpool North Pier’s owner, Peter Sedgwick, on repairs to the pier’s steelwork and decking. Peter, who owns all three of Blackpool’s piers, said he was hoping that his continued investment would eventually help him achieve the National Piers Society’s Pier of the Year award. However, he admitted that it would be a tough job because maintaining the pier was ‘like painting the Forth Bridge’ – a never ending job!

July 2018 – Blackpool North Pier, the birthplace of Sooty, celebrates the little bear’s 70th birthday!
When Harry Corbett bought a bear glove puppet on Blackpool’s North Pier in 1948 to entertain his children, he could surely not have realised he was teaming up with a future TV icon.
Read More

July 2019 – Blackpool North Pier open day takes place this Saturday!
The 2019 free North Pier Open Day was organised by Blackpool Council and the Blackpool Pier Company and included music and entertainment, live Punch and Judy shows and a traditional barrel organ. Some rides were completely free for children (who had to be accompanied by an adult) and there was a free coconut shy with seaside prizes along with lots of seaside craft activities.
Read More

January 2020 – Blackpool North Pier theatre renamed in honour of Joe Longthorne
An all-star variety opening night has been scheduled for the newly-named venue on May 31, what would have been Joe’s 65th birthday. The Grade II listed pier and it’s 1,400 capacity theatre was Joe’s all-time favourite venue to have performed in, with more than 20 seasons appearing at the theatre.
Read More

March 2020 – A piece of Blackpool North Pier’s history washed ashore
A light fitting believed to be from the North Pier’s Indian Pavillion, which was destroyed by a fire in September 1921, was found on the sand under the pier following weeks of stormy weather. Pier owner Peter Sedgwick said: “Because of the storms, the sand around all the piers is getting low, and it’s starting to show all the steel that’s been hidden for years”.
Read More

March 2020 – Beach erosion causing foundation exposure for Blackpool’s three piers
There may be trouble ahead for the resort’s three famous piers, as owner Peter Sedgwick has voiced his concern about falling sand levels – which has left scrap metal from generations past exposed beneath the structures. He said: “The sand is falling so much around the piers it’s showing the bottoms of the legs that haven’t been seen for years. They were set in concrete, and the concrete is on show, it’s dropped that low”.
Read More

June 2020 – First live-stream event from Blackpool North Pier’s Joe Longthorne MBE Theatre
Comedian Roy Chubby Brown has vowed to make history in Blackpool as the first performer to take to a theatre stage in Britain since Lockdown. The charity chat show event is set for Saturday June 27 and will be streamed live online for audiences to enjoy.
Read More

August 2020 – Joe Longthorne MBE Museum opens at Blackpool North Pier
In August 2020, the inside of the former theatre tearoom turned exhibition space became a museum holding some of Joe Longthorne’s treasured memorabilia from his illustrious showbiz career, his MBE honour to his gold disks, stage suits and his much loved piano, once owned and played by American superstar singer, writer and producer Stevie Wonder. Adorning the walls were tributes, messages and anecdotes of fellow entertainers, sportstars and pals from across the world, Engelbert Humperdinck, Bob Hope to Geoff Hurst – Jimmy Tarbuck and Bruce Forsyth.
Read More

January 2021 – Blackpool North Pier theatre remains on Theatres Trust ‘at risk list’
In a statement, the trust said that, while the uncertainty owing to the pandemic has had a “devastating” impact on the UK theatre industry, “relatively few theatre operators have ceased trading and fortunately none of the buildings left empty look to be in imminent danger.” Some 21 theatres were unveiled on the register, highlighting venues that were in need of refurbishment but could be of greater value to communities if they were given more support.
Read More

March 2021 – Pantomime returns to Blackpool North Pier this summer!
What summer 2021 really needs is a sprinkling of pantomime magic – oh, yes it does! And renowned theatre company LHK Productions was set to get tongues wagging with its summer treat Aladdin and His Magic Ring, which would be presented exclusively for grown-ups. The adult-themed production would open at North Pier’s Joe Longthorne Theatre on July 24 for a month-long run, with television personality Kim Woodburn announced in the role of the Genie.
Read More

April 2021 – Blackpool North Pier’s new ‘Garden’ a hit with visitors
The sun was out and bosses at North Pier were inviting all to join them in The Garden – the resort’s latest new outdoor venue. The totally-transformed Garden was the ‘sister’ bar to Bloom located in what was North Pier’s old solarium.
Read More

October 2021 – ‘Alien brains’ found under Blackpool North Pier!
Chairman of the Lancashire Marine Conservation Society, Dr Barry Kaye, said: “These are Honeycomb worm reefs. Larger mounds, or ‘reefs’, of this sort are common around Morecambe Bay, and one of the type species for that area. They do not form such large reefs in many other places. The reefs come and go when local conditions favour the worm”.
Read More

February 2022 – The Proms meet Ibiza at Blackpool North Pier this summer!
Ibiza Proms On The Pier is set for Saturday, July 16 and organisers Classic Events promise “an evening of feel-good Ibiza classics performed by our 40-piece orchestra and amazing vocalists”.
Read More

October 2021 – ‘Alien brains’ found under Blackpool North Pier!
Chairman of the Lancashire Marine Conservation Society, Dr Barry Kaye, said: “These are Honeycomb worm reefs. Larger mounds, or ‘reefs’, of this sort are common around Morecambe Bay, and one of the type species for that area. They do not form such large reefs in many other places. The reefs come and go when local conditions favour the worm”.
Read More 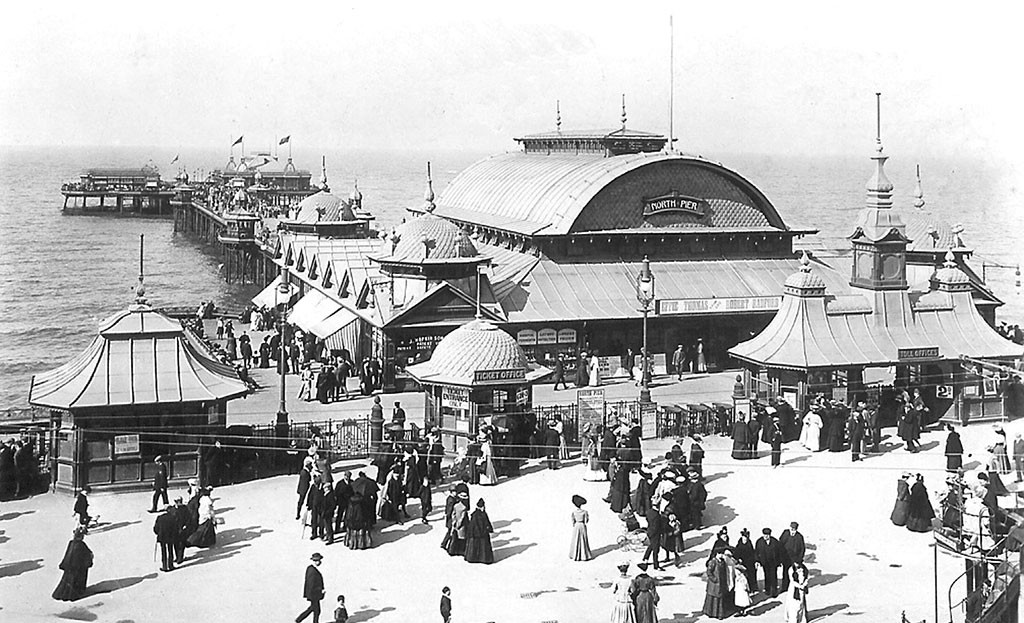 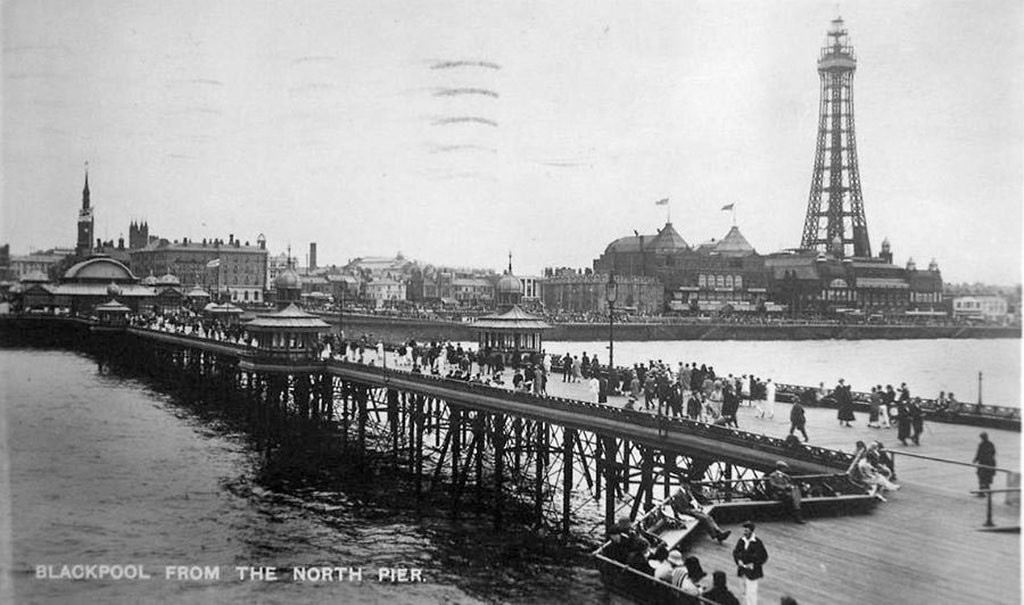 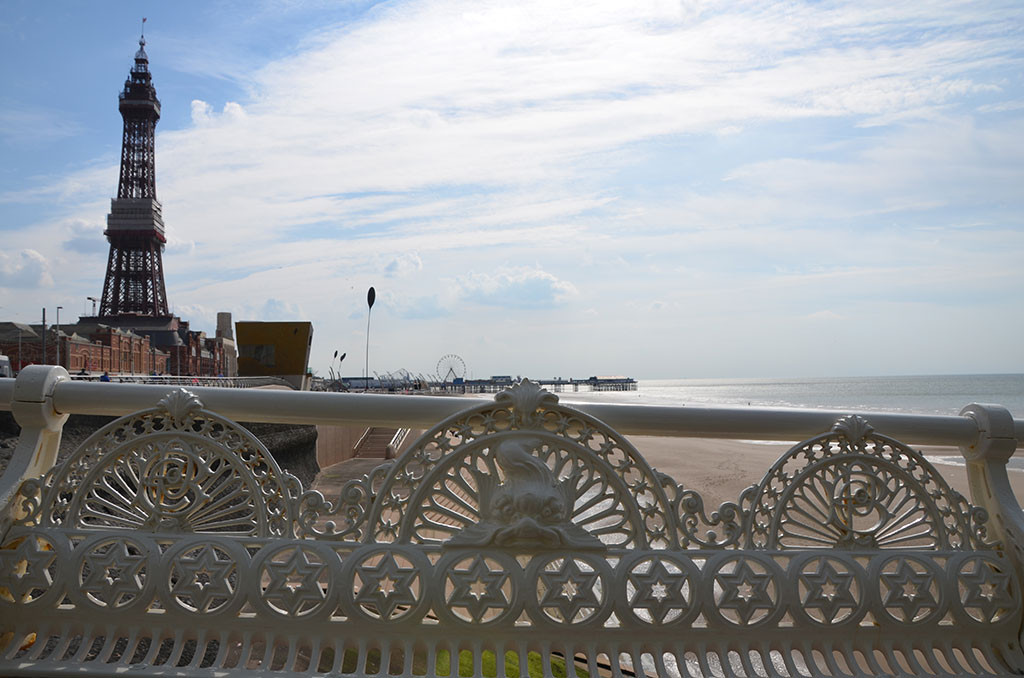 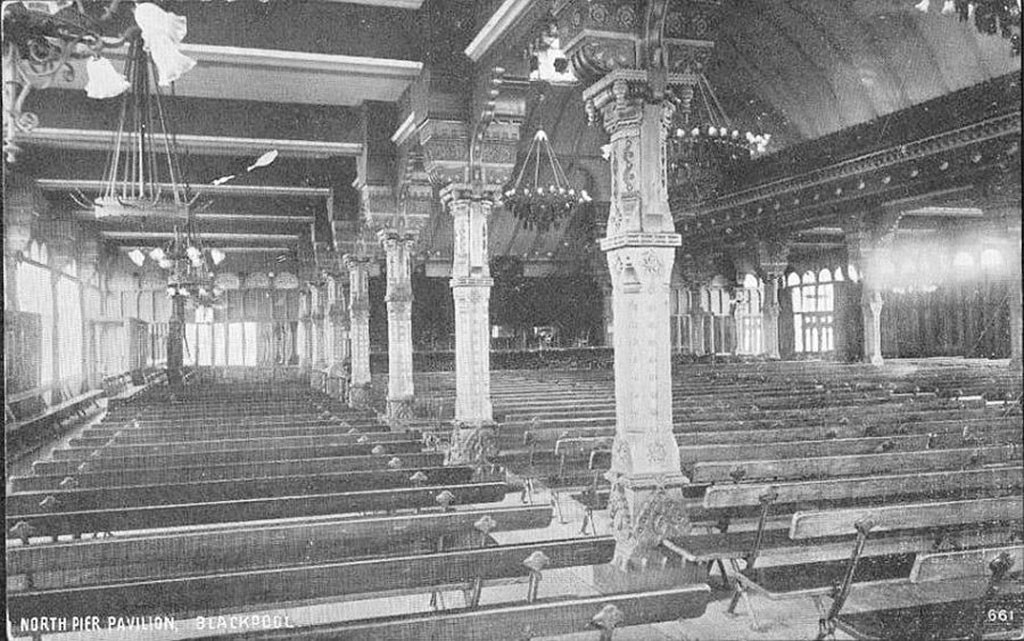