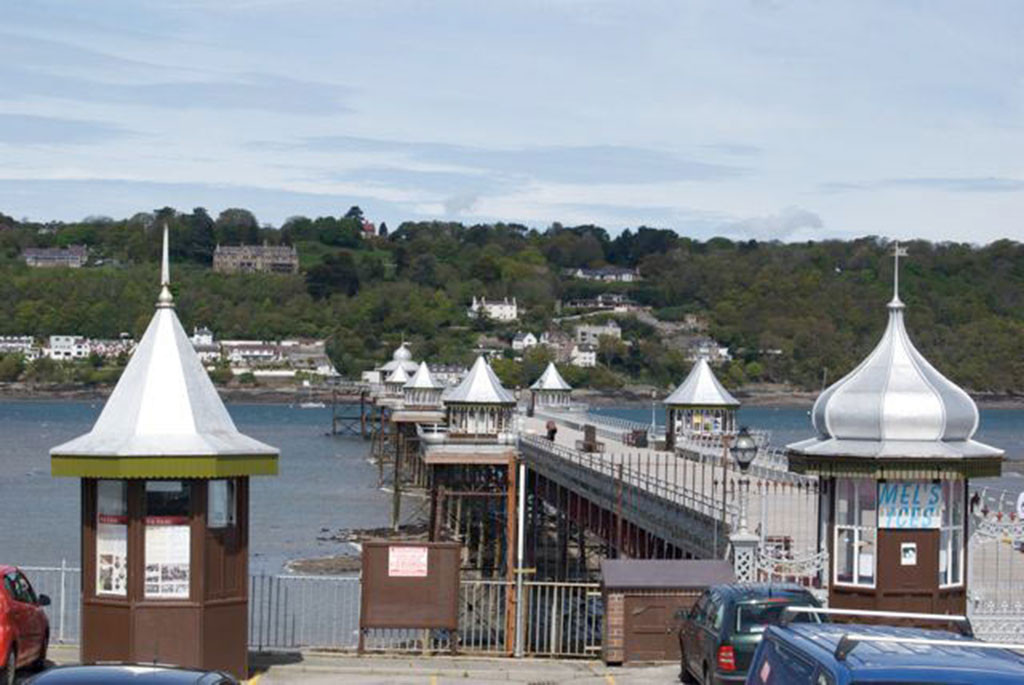 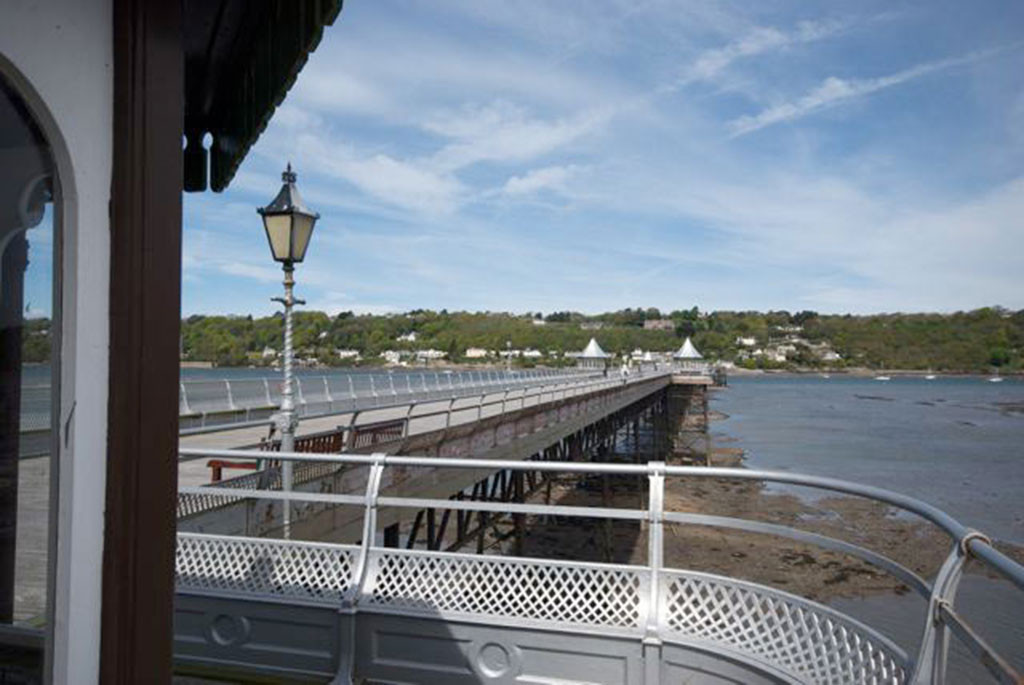 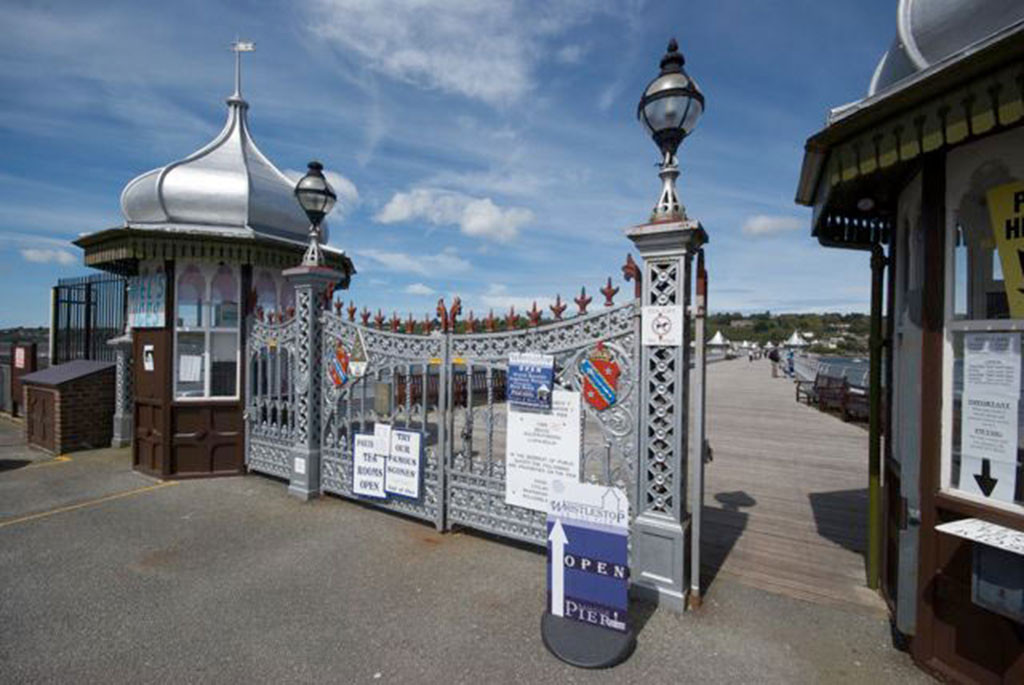 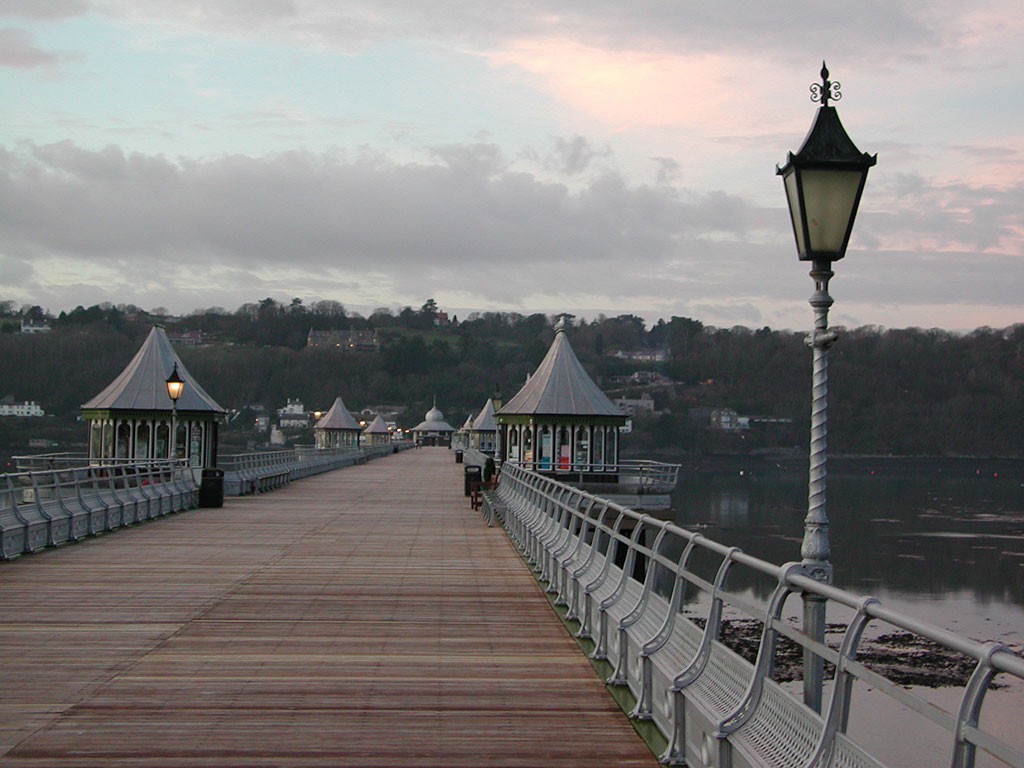 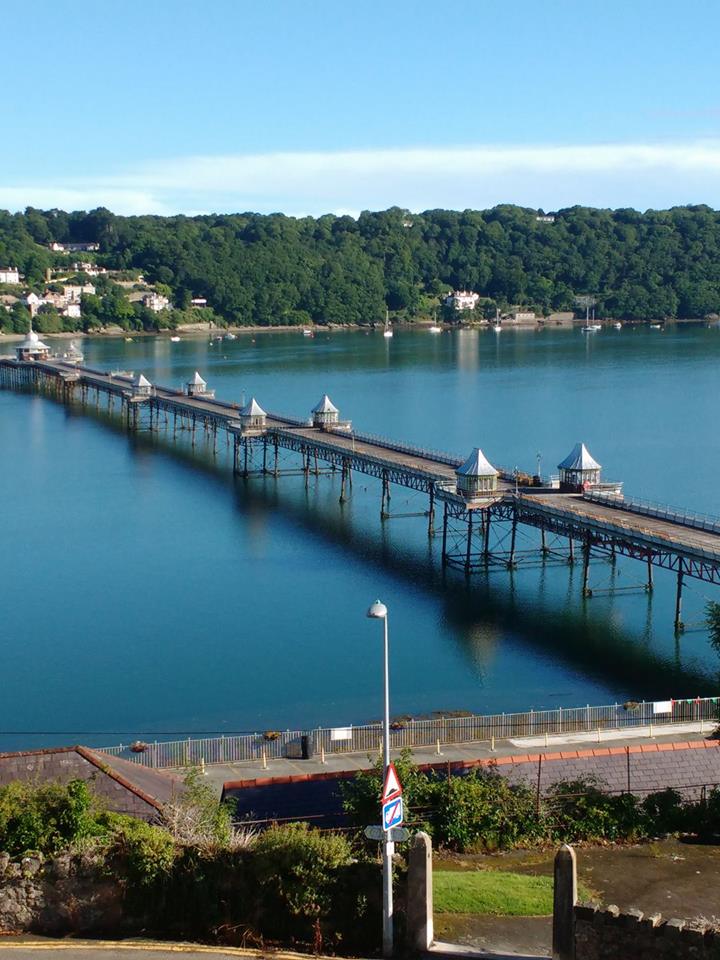 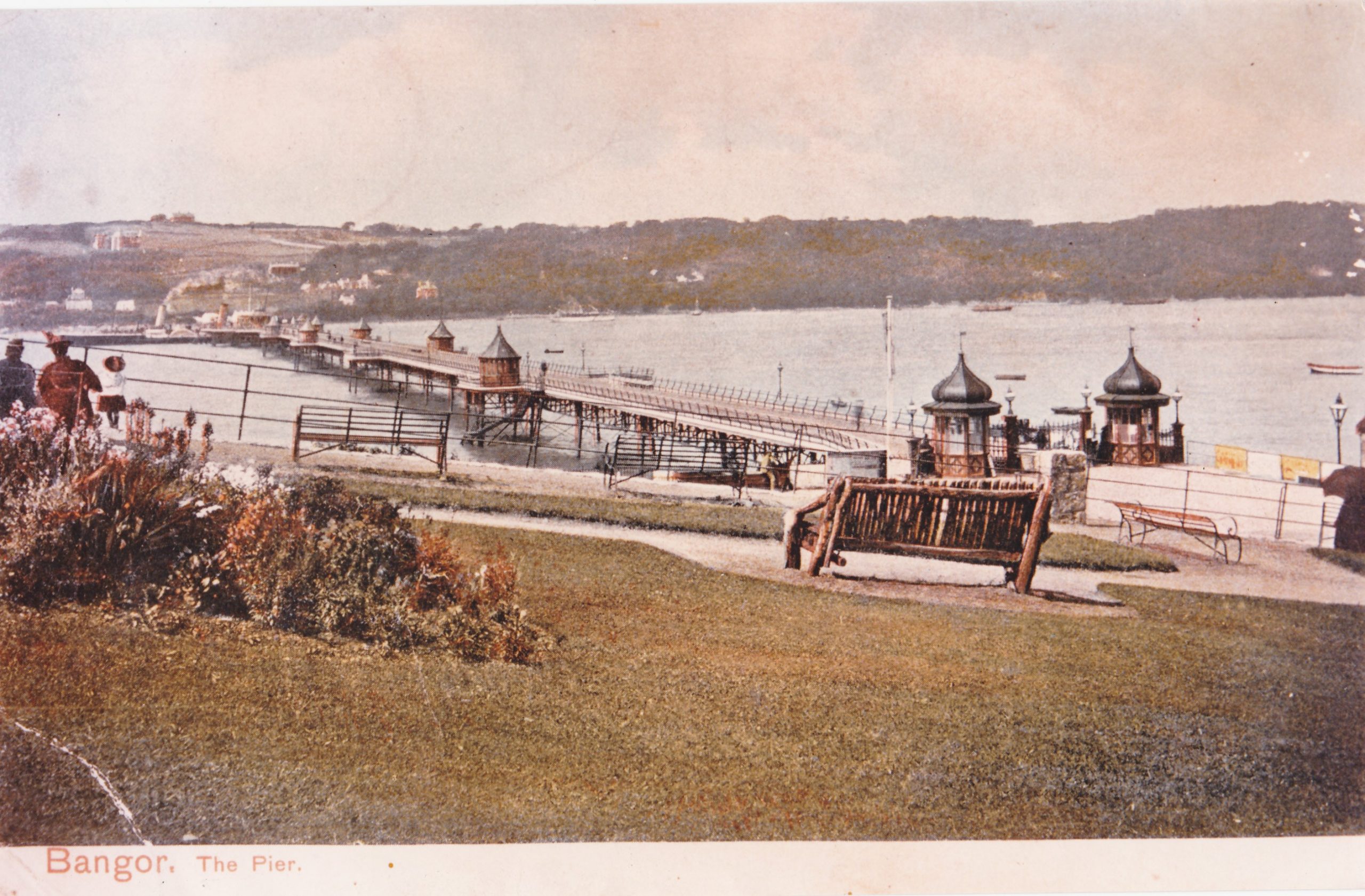 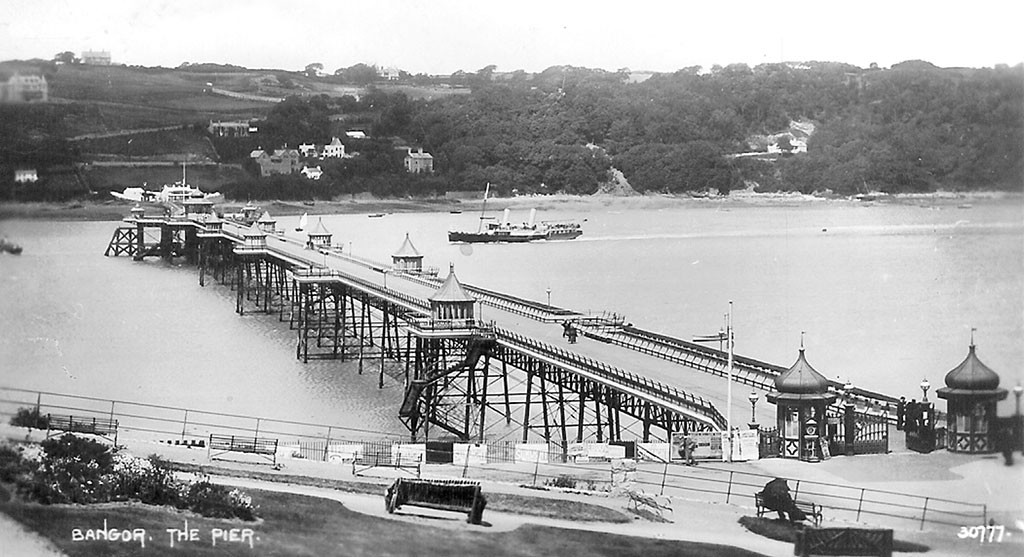 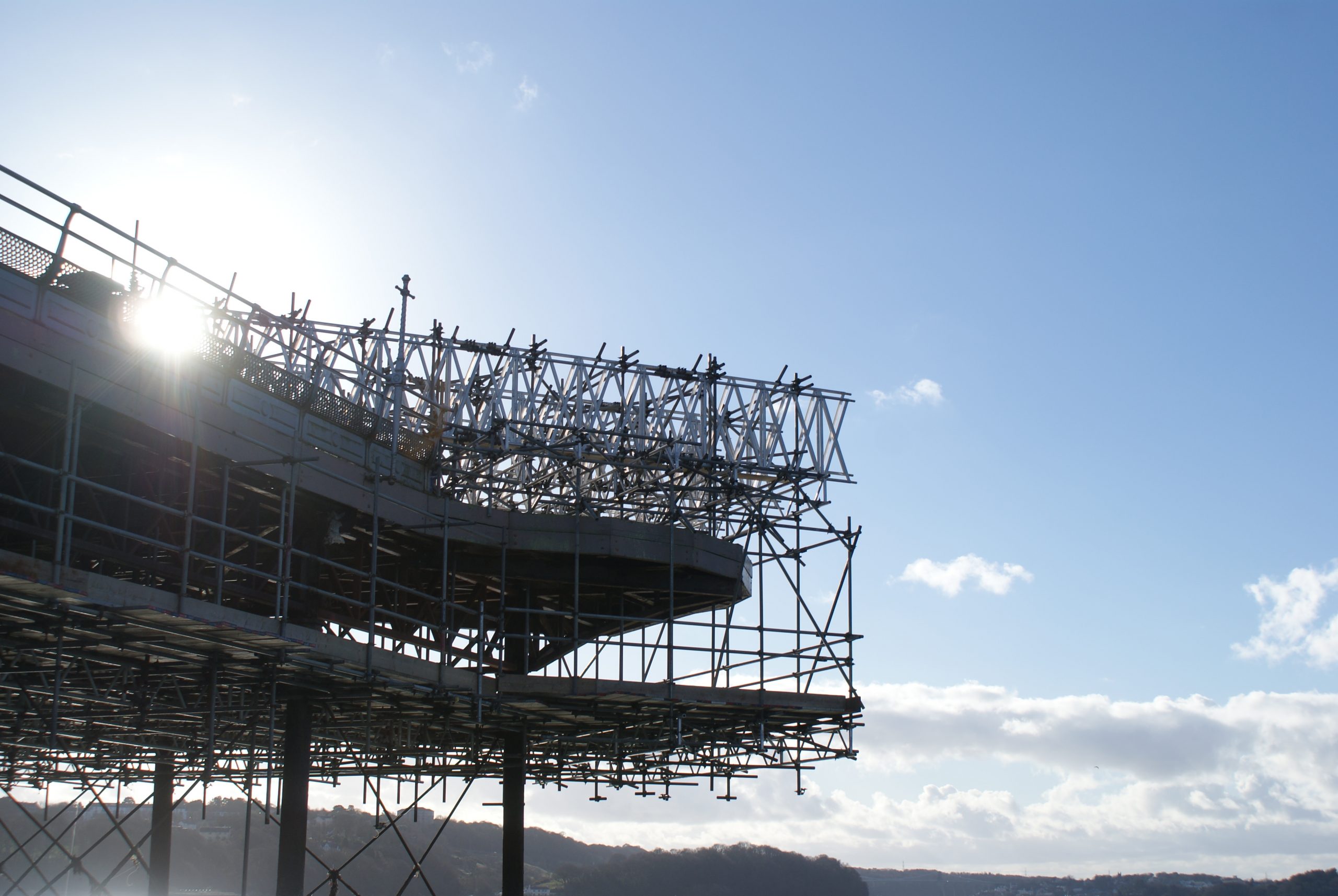 After an 1893 Parliamentary Bill, work on the 1550 foot pier (including a pontoon landing stage) began to the design of J.J.Webster of London. The pier was opened on 14th May 1896 by Lord Penrhyn. It had cost £17,000. Steamers called from Douglas, Liverpool, Blackpool, and elsewhere, and there was Pierrot entertainment.
In 1914, a cargo steamer collided with the pier. Repairs were carried out by the Royal Engineers. The 3 foot gauge baggage line was removed at this time.

The pier closed for safety reasons at the end of 1971. Ownership passed to Arfon Borough Council in 1974, who decided to demolish the structure. However, the City Council objected and listed building status was obtained for the pier, one of the finest in Britain. Eventually, the City Council took over the pier for a nominal 1p.

With help from the National Heritage Memorial Fund, the Welsh Office and the Manpower Services Commission, restoration began in November 1982 and the pier was officially re-opened on 7th May 1988 by the Marquis of Anglesey.
The National Piers Society was accepted as a member of the Bangor Pride civic partnership and offered to do all it could to promote and sustain interest in the preservation and continued enjoyment of the Garth Pier.
However, in November 2011 it was reported that £2m was needed for essential maintenance work to Bangor pier – with claims maintenance had been “ignored” since the 80s. A public meeting also in November heard complaints that not enough was being done to bring visitors to the area. Disputes arose between local people who wanted a greater say in how the pier was managed and the Council’s Town Clerk who felt that the right approach was for people to stand for election as local councillors.

The Council reported that they had amassed a pool of one million pounds for maintenance but that the actual requirement could be twice this amount because of environmental considerations during pier maintenance operations.

By February 2012, it had become clear that the Council’s budget was short by a million pounds and the Council announced they were looking for grant aid to help pay for the pier’s refurbishment.

May 2013 – More questions over the future of Bangor Pier
However, by May 2013, it was reported that little progress had been made and the council was still looking for funding and engaging consultants to prepare a report on how much the work to restore the pier will cost.

Councillor wants more done to promote pier as tourist attraction
In January 2014, it was announced that the consultant’s report would be ready within a couple of weeks. However, councillor Nigel Pickavance, advanced the view that a Bangor pier group should be set up, independent of councillors, to promote it. Complaints that residents aren’t being kept up to date on any developments were being received and a group called The Bangor Pier Appreciation Group was been set up on Facebook.

November 2014 – Could lottery money help renovate Pier?
In November 2014, it was announced that the City Council had engaged consultants to help build their application for Heritage Lottery Funding to renovate the Grade II listed Garth Pier, add more kiosks and introduce displays to tell the structure and city’s story. The consultants had been asked to draw together the technical and expert input required to evidence the work which needs to be done to the structure and to provide architectural input into designs to reconstruct new kiosks.

Bangor residents urged to back pier renovation lottery bid
A public meeting to discuss the HLF bid was arranged for January 2015 and City residents were urged to attend and show their support for the application. Council consultant Jim O’Rourke said “A successful HLF bid will breathe new life into Bangor Pier and make it a focal point on the waterfront.”

Bangor Pier HLF bid rejected
The application to HLF for a grant of between £50,000 and £80,000, was submitted in March and was strongly supported by the local community. However, in June 2015, the bid was rejected by HLF.

May 2017 – HMS Conway immortalised in window on Bangor pier
In May 2017, a window, created by Jayne Ford in one of Bangor Pier’s pavilions, was unveiled by Lord Rupert Paget to commemorate HMS Conway, a naval training ship that was moored at Glyn Garth off Bangor and then Plas Newydd on Anglesey before it ran aground in 1953 while being towed for repair work.

August 2017 – Bangor Pier set for major restoration
August 2017 saw the commencement of a £1m restoration project aimed at ensuring the future of Bangor Pier for many years to come. The project, funded directly by Bangor City Council, involved work to strengthen the structure and also provide new handrails on the pier deck. Significant scaffolding was necessary along the pier sides and the work had to comply with stringent health and safety measures.

September 2017 – Dog ban on Bangor pier to be lifted – for 12 month trial period
In September 2017, it was reported that rules which stated that dogs were not allowed on Bangor Pier could be changed following a local poll overwhelmingly in favour of a lifting of the ban. A 12 month trial of the new arrangement was suggested.

March 2018 – Bangor Pier restoration work continues
In March 2018, the Bangor Aye website reported that the £1m restoration of Bangor’s Garth Pier was continuing to progress well. The work, which commenced in August 2017, was expected to take up to four years to complete.

January 2019 – Major section of Bangor’s Victorian pier restoration project almost finished
In January 2019, it was reported that Phase Three of the pier restoration, the pier head area, was set to finish ahead of its March 31, 2019 schedule. The work had included major reconstruction of the structural elements of the pier plus improvements to wrought iron, hand railings, buildings, repainting, repair and shot blasting areas of metal fatigue and corrosion.

April 2019 – Bangor’s Garth Pier restoration fund £600,000 short
Unforeseen work on the pier arising from damage discovered at the furthest end of the 1,500ft long structure meant that in April 2019 it became clear extra cash was needed in order to complete the restoration work. The additional cost to repair this was not factored into the original costs, so the council was exploring further options to fund the remaining work.

May 2019 – Whistlestop Cafe on Bangor Pier wins Traditional Welsh Restaurant of the Year
May 2019 saw one of the smallest restaurants in the country voted the best Traditional Welsh Restaurant of the Year when the Whistlestop Cafe on Bangor Pier, which only has room for 8 diners inside and 20 when outside seating is used, took the title. Proprietors Terry and June Thomas said they they pride themselves on using locally sourced ingredients.

May 2019 – Very tasty! Over 2000 people attend Movable Feast at Bangor Garth Pier
Also in May 2019, more than 2,000 guests attended the Movable Feast event on Bangor Garth Pier. A wide selection of food and drink was available including seafood and celebrated lamb and beef dishes and gin and beer from local breweries and distilleries. Live music from local bands and musicians accompanied the event.

June 2019 – Bangor Garth Pier pier head cafe available to let
The restaurant on the pier head of Bangor Garth Pier, which housed the famous Tea Rooms reputed for the quality of their scones, and which was closed after serious faults were found in the structure beneath it, was put on the market again in June following repairs made by the City Council. The estate agents marketing the restaurant said “We’re excited to be marketing this unique commercial unit at an important Bangor landmark.”

August 2019 – New Pavilion tea rooms at Bangor Pier to open soon
After extensive work on the Pier, it was announced that the Pierhead and refurbished Tearoom would reopen as a family-friendly cafe and evening venue offering stunning views of the Menai Strait and surrounding area.
Read More

April 2020 – April fool: Bangor Pier to become a bridge!
Not everyone is in favour of the new plans, with one local resident complaining: “If the Pier is extended over to Anglesey it would then become a bridge and it could no longer be called a pier, so for that reason I’m against it, it‘s always been known as Bangor Pier.”
Read More

June 2020 – Volunteers sought at Bangor Garth Pier
Plans are under way to create a Bangor Pier Enterprise Group comprising the City of Bangor Council, the private businesses that operate on the pier, and a new community volunteers group – the Bangor Pier Volunteers.
Read More

October 2020 – Bangor Pier to remain open during Welsh lockdown
In October it was announced that the local lockdown rules in Bangor were being replaced by new national firebreak restrictions from 6pm on Friday 23 October until 9 November. The Welsh Government said the fortnight-long action was needed to save lives and prevent the NHS from being overwhelmed. A spokes-person from Bangor City Council said: “To encourage people to enjoy the outdoors and to facilitate exercise, Bangor City Council wish to confirm that the Pier, like parks and other open spaces, will remain open during this ‘Firebreak’ lockdown”.
Read More

April 2021 – Friends of Bangor Garth receive the keys to their Pier kiosk!
Chair of the group Avril Wayte was delighted to receive the key from the Deputy Mayor of Bangor Cllr Owen Hurcum and City Director for Bangor Iwan Williams. Avril Wayte said: “The Friends of Bangor Garth Pier is a charitable organisation set up last year in order to support the City Council to protect the pier for the future. The Council have very kindly allowed the Friends to have a kiosk on the pier to run a shop from which we will sell arts and crafts, including artwork, pottery, jewellery, glassware, all made locally to raise money to support the restoration fund for the pier in the future”.
Read More

May 2021 – What a way to start Bangor Garth Pier’s year-long celebrations of its 125th anniversary!
With the large-scale event delayed by a year until May 2022, Bangor City Council and Friends of Bangor Garth Pier said they will celebrate the anniversary in different ways over the coming months. A series of interviews, discussions and presentations on the history of the pier and the area will be published online, with a number of small-scale events and activities scheduled to take place on the pier later on this year, subject to Covid-19 regulations.
Read More

August 2021 – Glowing review for Bangor Pier’s Whistlestop Cafe
The Whistlestop is a bijou café halfway down on the left of the pier. It is famous for its Seafood Chowder but the new owners who took over in 2020 in the middle of the pandemic also offer Welsh rarebit, Anglesey burgers, pancakes and Bara birth. This tiny café with a big reputation can seat eight inside and 20 outside with stunning views of Anglesey and the Snowdonia range.
Read More

September 2021 – Bangor Garth Pier launches annual pass scheme
Pricing for the Annual Pass started at £5 for residents of an LL57 address, £10 for local students & £25 for other visitors, which allowed unlimited visits to the Pier. The normal admission price of Adults – 50p, Children 6-17yrs – 20p and OAPs – 20p, without a pass, remained in place.
Read More