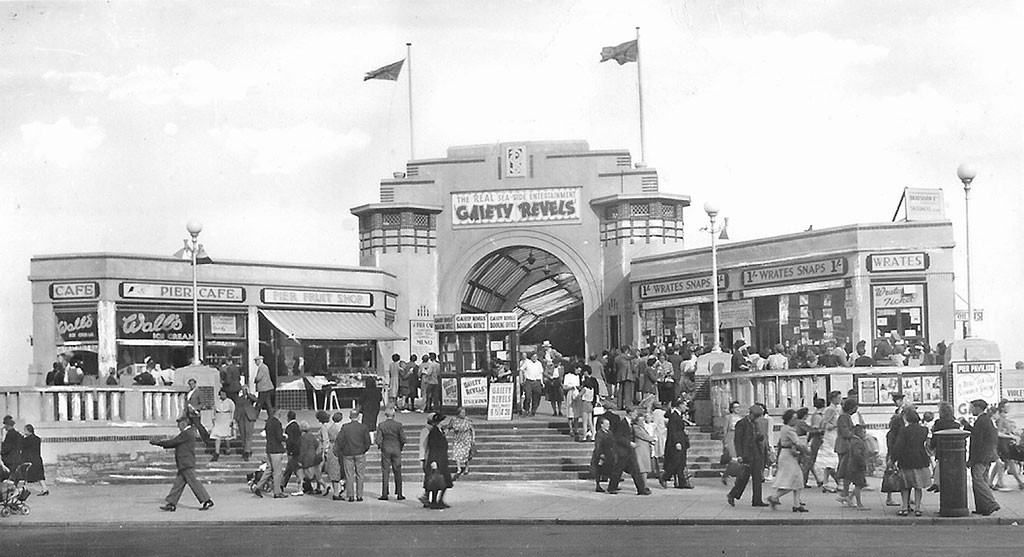 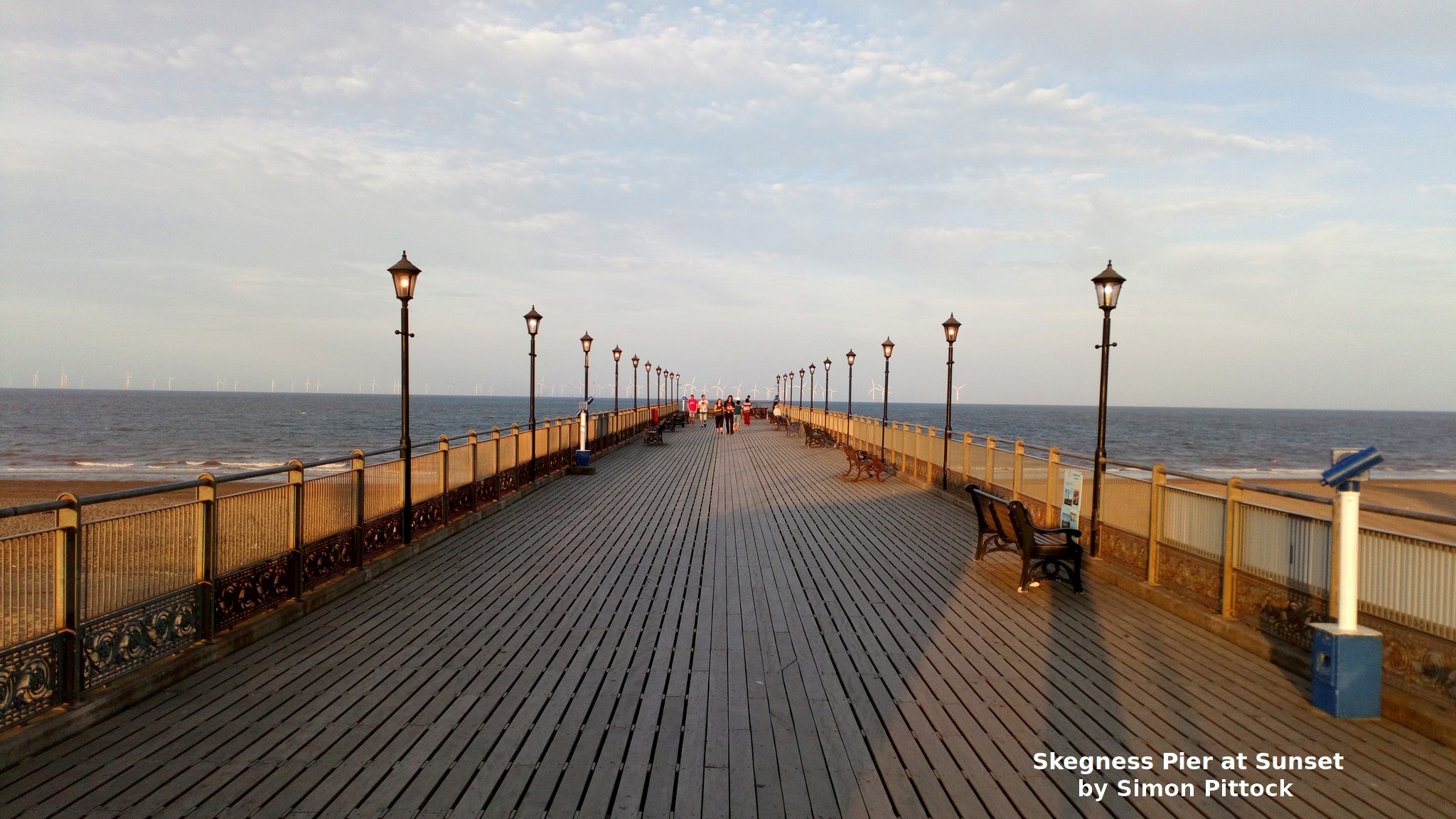 The pier-head saloon was extended in 1898, and new refreshment rooms were built at the pier-head. In March 1919 the schooner ‘Europa’ breached the pier. A temporary gangway was completed by August but the pier was not fully restored until 1939.

The north and south entrances were built in 1929/30. The entrance was modernised in 1936/9 by incorporating a cafe and shops on either side of the archway.

Sectioned during World War II, the pier re-opened in 1948 after £23,528 had been spent on repairs. Erection of a steel-framed canopy was begun at the shoreward end at this time and completed in 1949. The 1953 East Coast Floods damaged the pier-head which was rebuilt at a cost of £3,000.

The pier entrance and archway were demolished and a new building containing shops, cafes and amusement arcades was built in 1971. In addition, extensions to the theatre took the seating capacity to over 1100.

On 11th January 1978, a severe storm washed away two large sections of the pier and left the theatre isolated at the seaward end. Plans to link the two sections by monorail, and to build a new 1200 seat theatre and a 250 foot tower all fell through later that year when an application for financial assistance was rejected.

Work began on dismantling the theatre in October 1985 but, while this work was taking place, a fire gutted the building.

Developments then focused on the shoreward end which was substantially modernised. A ten-pin bowling alley opened in 1991 and other facilities included bars, shops, stalls, a children’s soft play area and high tech arcade attractions such as Laser Quest.

June 2012 saw the announcement of a multi-million pound project to regenerate Scarbrough Esplanade by constructing a covered canopy, linking Skegness Pier and Bottons Pleasure Beach. In February 2013 it was confirmed that Skegness Partnership’s application for £1.2 million of European funding for the project had been included in Lincolnshire County Council’s final bid.

In April 2013, proposals for a sea taxi linking Skegness and Norfolk were approved by Skegness Town Council alnthough there was some skepticism among local tour operators that the venture could be successful.
Then in August 2013, it was confirmed that Skegness Partnership’s bid for £1.2 million through the European Regional Development Fund to enhance Scarbrough Esplanade had failed and the project could not therefore proceed.

December 2013 – Storms cause flooding of pier buildings
Fierce storms in December 2013 caused substantial damage, flooding both the Pier Super Bowl venue adjoined to thr pier and the low-lying Laser Quest venue. Fire crews attended to pump out the flooded buildings.
January 2015 – Pier Bowl for major revamp after floods
In January 2015 it was announced by the owners, UK Piers Ltd, that the two damaged facilities would remain closed until the Easter, to allow for a complete revamp, although pier itself would remain open.
February 2015 – Six-figure refurbishment for pier buildings.
Then in February 2015, details were revealed of the extent of the work required by the company undertaking it, B&M Installations of Nottingham. The bowling alley and Laser Quest areas were being stripped out and a new bowling alley, with diner, imported from America.

March 2015 – Museum on the pier being considered
The possibility of a seaside heritage museum located on the pier was announced by the Town Manager, Lisa Collins, in March 2015. Although still in its early stages, interest in the idea had been shown from the pier and other businesses in the town.

May 2015 – TripAdvisor awards for town pier
In May 2015, the pier and two of its entertainment venues Skegness Bowl and Laserquest won TripAdvisor Certificate of Excellence Awards, based on outstanding customer reviews.

June 2015 – Skegness Pier celebrates its 134th birthday!
Work began on the pier in 1880, and on June 4 1881, the pier was opened amid great ceremony by the then Duke of Edinburgh. So June 2015 marked the pier’s 134th birthday. Skegness Pier director Carolyn Wilkinson said: “The pier has had to keep evolving over the years and has suffered several major setbacks over its 134 year history which have been well documented in local history books.

May 2016 – Major refurbishment planned for Skegness Pier
In May 2016, UK Piers, which owns the site, applied for permission for a new roof for the arcade which suffered from a problem with damp and meant that some of the amusements had to close each winter. Carolyn Wilkinson director of UK Piers said “This autumn the seaward end of the pier is undergoing a major refurbishment enabling it to extend its opening hours throughout the winter period. The existing roof of deck three is not adequately insulated to house the latest high tech machines our customers now have come to expect.”

November 2016 – A wonderful look-back at Skegness Pier and seafront!
In November 2016, the Lincolnshire Reporter published a fascinating series of images and film published by the British Film Institute of what Skegness was like as long ago as 1928.

February 2017 – Major investment to protect Skegness Pier
In February 2017, a major refurbishment was completed on Skegness Pier’s seaward enclosed section, known as Deck 3, to protect the 136-year-old pier. The work involved recladding the roof to make the structure watertight and protect it for another 20 years. The refurbishment meant that the whole of the pier could now be opened at weekends and most of it would now be able to be open seven days a week.

June 2017 – Passers-by evacuate arcade and put out fire on Skegness Pier
In June 2017, a potential serious fire on a neon sign on Skegness Pier was spotted by two passers by who helped to evacuate the pier and then put the fire out using a fire extinguisher.

March 2018 – New Beach Bar opened at Skegness Pier
March 2018 saw the opening of a new beach bar on the pier giving an authentic Beach Hut look and feel and providing a range of cocktails to emphasise its exotic setting in sunny Skegness.

May 2018 – Bank Holiday boom for Skegness Pier!
After very bad weather caused very poor trading over the Easter period, Skegness Pier enjoyed a major boost on the May Bank Holiday weekend. The sunny weather brought visitors flooding into the resort with some local people saying that it was the busiest May Day bank holiday Skegness had ever had.

March 2019 – New virtual reality attraction for Skegness Pier
The latest new attraction, the Hologate Virtual Reality Experience, was installed within the Arcade. In 2017, UK Piers LTD opened Escape Rooms within Skegness Pier, which was hugely popular with both locals and tourists.
Read More