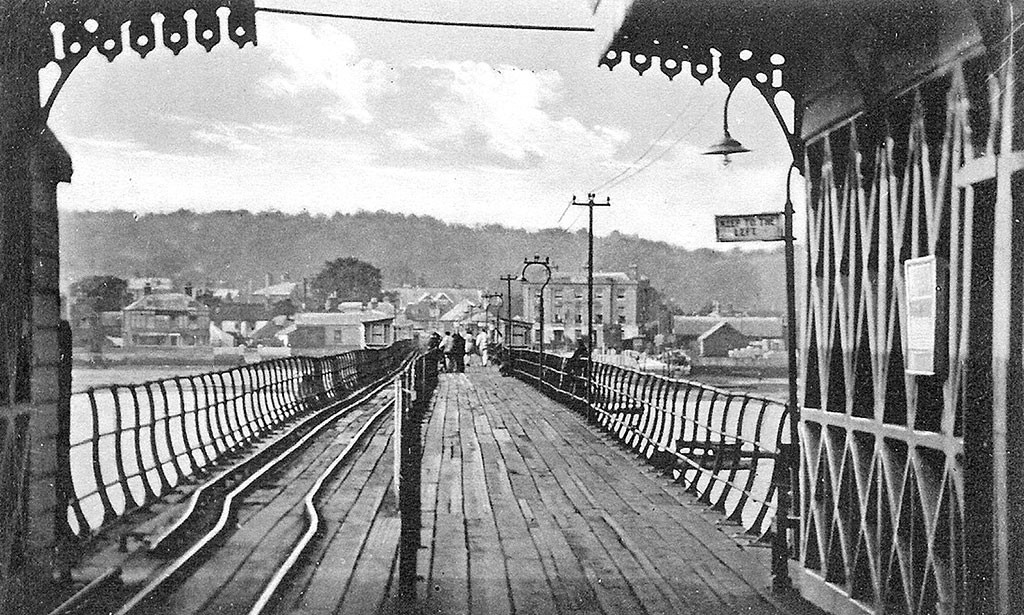 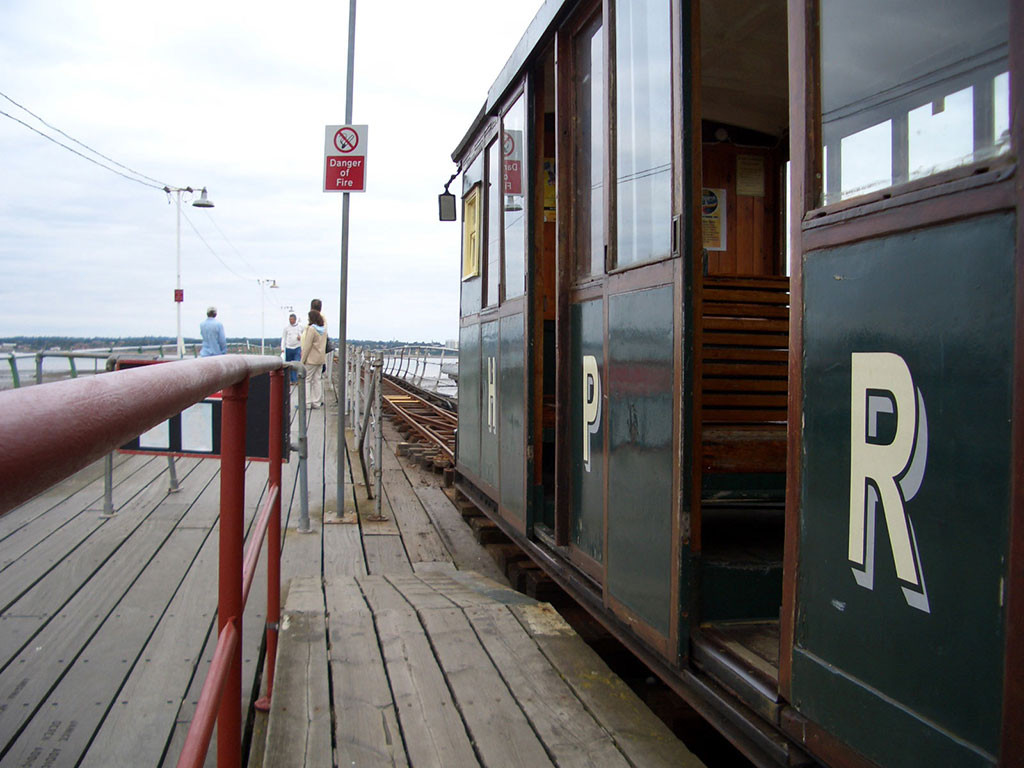 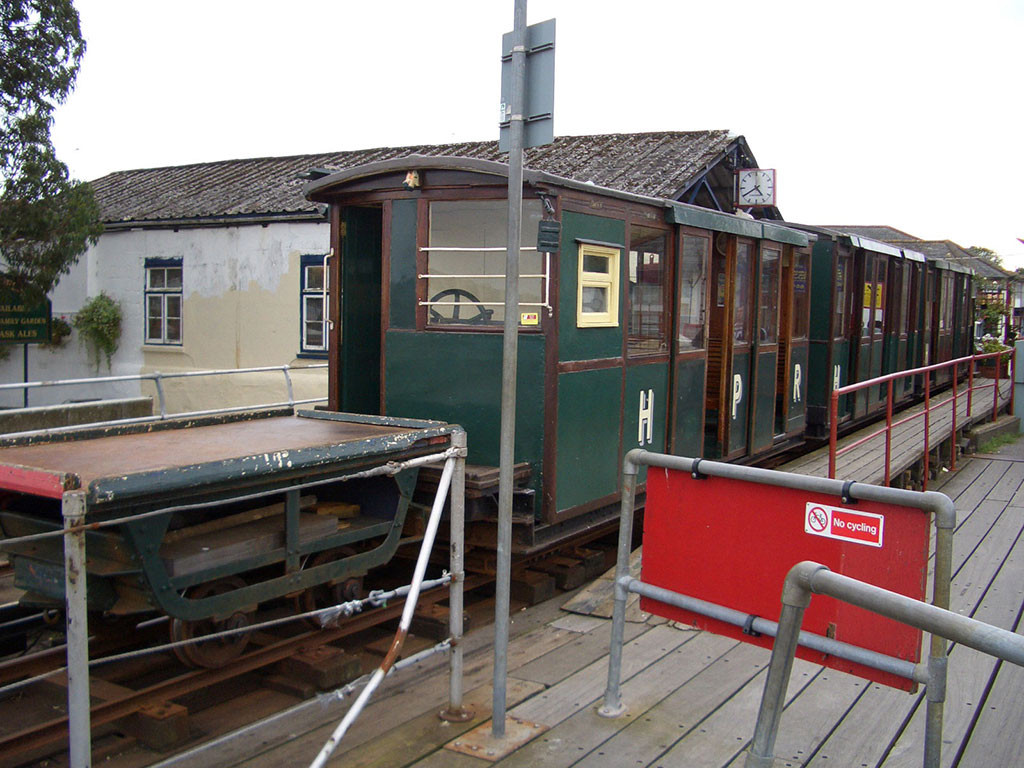 Hythe Sailing Club was allowed to build a clubhouse on the pier-head in early 1894. In 1896, a £1500 overhaul was completed. A baggage line was added in 1909, and this was adapted to take passenger traffic after World War One. The 2 foot gauge, third-rail electric tramway opened in July 1922 using ‘Brush’ locomotives.

Major developments in 1947 involved the pontoon being moved from the head, where it had been erected in the 1930s, and connected by a bridge. The entrance was modernised in the 1960s. Shelters along the pier’s length were removed at this time. The pier-head buildings were developed in 1970/71.

The pier-head was re-planked in April/May 1982 but a structural survey, in 1983, estimated that repairs costing £250,000 were needed. These were duly completed in time for the 1988 summer season and included replacing the trusses on the inshore and middle sections of the pier. The actual cost of repairs was £290,000.

A half-hourly service to Southampton Town Quay was operated throughout the year, the journey taking approximately twelve minutes. Trains still carried passengers to the pier-head.

May 2016 – Ferry collides with Hythe pier
In May 2016, coastguards were called to rescue twenty passengers and three crew members from the Hythe Ferry after it collided with the pier. Fortunately there were only minor injuries. According to the ferry’s owners the vessel became wedged beneath the pier and the wheelhouse on top of the ferry was severely damaged.

October 2016 – Hythe Ferry and Pier at risk
In October 2016, the future of the Hythe ferry and pier came into doubt after White Horse Ferries admitted it was “unlikely” to continue operating the service. However, local businesses and the local community rallied round and a petition was set up to try and save the service, while other boat companies confirmed an interest in taking it over.

November 2016 – Could redevelopment be the way forward for Hythe Pier and Ferry?
After nearly 9,000 signed a petition calling for the ferry service from the pier to be saved, a committee was formed to take control of the pier. A packed public meeting in November 2016 was given ideas on saving the under-threat ferry service, including developing a heritage centre and an end-of-the-pier cafe.

December 2016 – Hythe Ferry service campaign backed by Dan Snow
The campaign to save Hythe pier and ferry service received a boost in December 2016 when television historian Dan Snow lent his backing, saying it was a “national treasure” which should be saved. The local community group aimed to take over the management of the pier and train.

February 2017 – Council provides emergency funding for Hythe Pier ferry
In February 2017, it was announced that Hampshire Council had provided emergency funding to enable the continued operation of the Hythe Ferry. The funding would cover the costs of chartering a replacement ferry while the current vessel undergoes maintenance work and could help to maintain the ferry service while new buyers were sought for the pier and ferry.

March 2017 – Fundraising gathers pace at Hythe Pier
In March 2017, members of the Hythe Pier heritage association celebrated after the end of the £20 challenge fund raising campaign in which community members signed up to any task, paying £20 towards the fund to help save the pier. The challenge included supporters walking up and down the pier for three hours, 21 triathlons and the younger generations staying silent for 24 hours. The challenge was part of the campaign to reach a target of £20,000 which would be used to cover structural surveys of the pier, charity start up fees and organisational costs.

April 2017 – Hythe Ferry and Pier sold
Then, in April 2017, it was announced that boat hire firm Blue Funnel Cruises had agreed to buy Hythe ferry, which crosses Southampton Water, for an undisclosed sum, a deal which also included the purchase of Hythe Pier and the railway that runs along it. A spokesman for the Hythe Pier Train and Ferry Action Group said they would hold discussions with Blue Funnel about the pier, which he said needed “substantial long-term investment”.

May 2017 – Hythe Pier Heritage Association gain backing from parish council
The following month, it was announced that Hythe and District Parish Council were looking positively at helping Hythe Pier Heritage Association (HPHA) forge ahead with plans to secure the long-term future of the pier. HPHA were hoping to employ a project development co-ordinator and the council agreed that recent savings made by the authority could be used to finance the role.

July 2017 – Garage fire near Hythe Pier
In July 2017, over 50 firefighters were called to tackle a blaze that had broken out in a garage close to Hythe Pier. Fortunately, the pier escaped any damage.

October 2017 – Campaigners mark centenary of Hythe Pier electric locos
October 2017 saw a celebration to mark the 100th anniversary of Hythe Pier railway. The community group aiming to take over the running of the pier organised a series of heritage events and rides on the train as part of its fundraising efforts.

February 2018 – Hythe Pier Heritage Association forge ahead with plans after being awarded new status
In February 2018, it was announced that the community group aiming to take over the running of the pier had been awarded registration as a Community Benefits Society by the Financial Conduct Society, which would enhance its legal standing and enable it to apply for grants from organisations such as the Heritage Lottery Fund.

July 2019 – Hythe’s Rock the Pier event a great success
Hampshire residents turned out for a music festival to help fund a major restoration project. It was organised by campaigners including Hythe Pier Heritage Association (HPHA). As well as providing entertainment for people of all ages the event was staged to restore the jetty to its former glory.
Read More

April 2020 – Hythe Pier train remains on track with a £10,000 grant!
In April 2020, a £10,000 was received from the Beaulieu Beaufort Foundation, a charity that supports local organisations and individuals. HPHA chairman Peter King said: “This is a great start to our funding campaign to support the restoration of historic and much-loved pier railway”.
Read More

May 2020 – Hythe Pier and ferry funding campaign doubles its target
In May 2020, a fundraising appeal launched to keep a Hampshire ferry service afloat raised more than £12,000 – far exceeding its original target. Some of the money raised by the campaign was marked towards the cost of repairing Hythe Pier and the electric train which takes passengers to and from the ferry.
Read More

August 2020 – Restoration of Hythe Pier train begins!
Volunteers embarked on a £222,000 project in August 2020 to restore a historic train that had been operating on Hythe pier for almost 100 years. Hythe Pier Heritage Association launched the ambitious scheme by starting to refurbish one of the wooden carriages that had been trundling along the jetty since 1922.
Read More