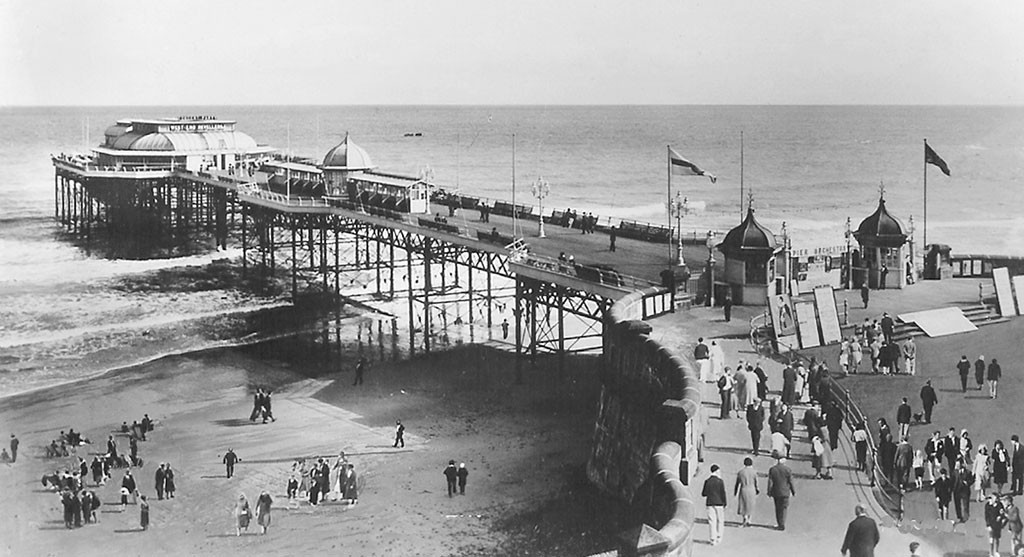 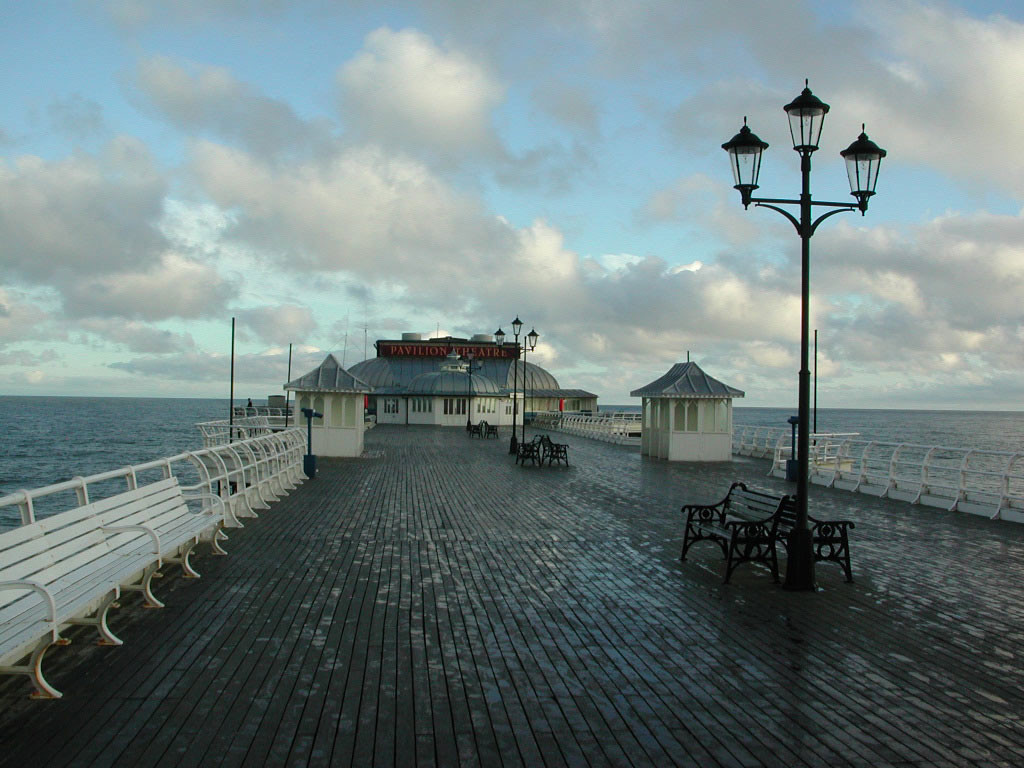 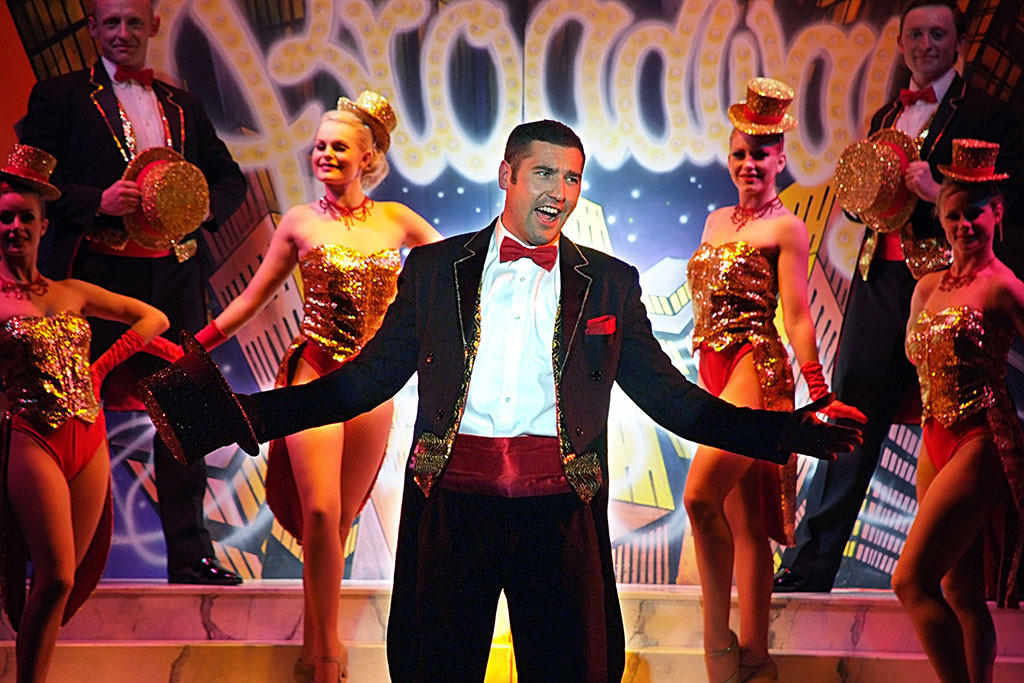 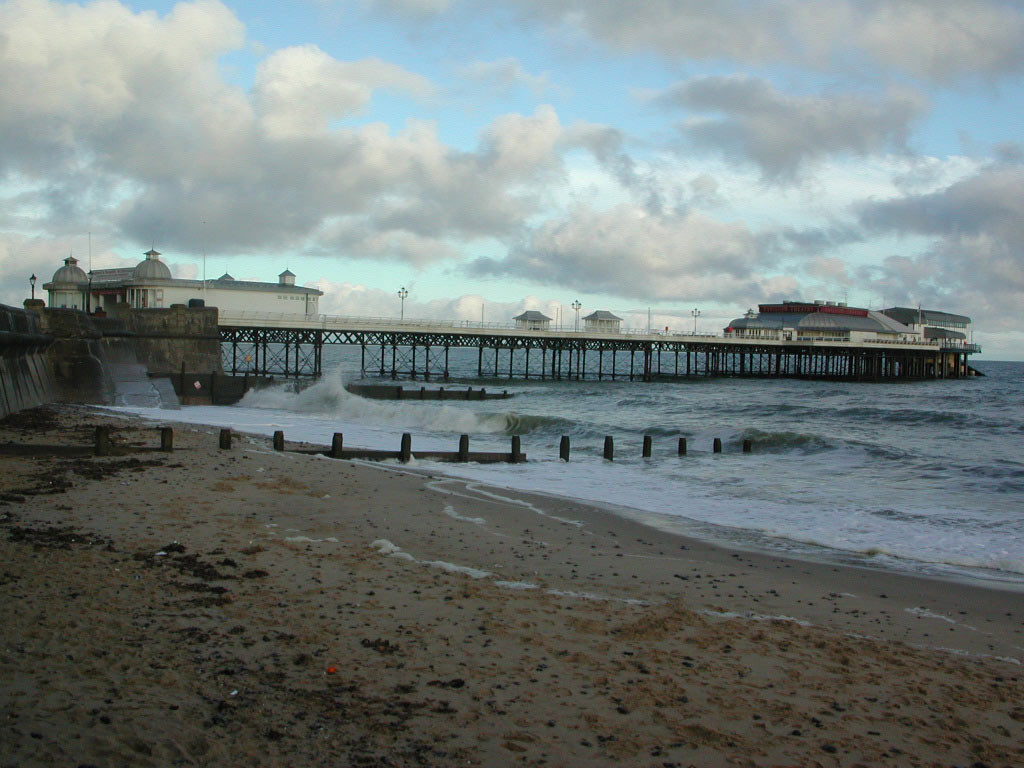 A 500 foot iron pier, the inspired work of a London engineering firm, Douglass and Arnott, replaced the second jetty. It opened on 8 June 1901, having cost £17,000. A bandstand was erected at the head. This was extended in 1905 to form a pavilion.

Sectioned in 1940 for defence purposes, the gap was bridged with planks to allow the lifeboat station to be reached (lifeboats have been stationed here since 1923).

In February 1990, gales destroyed the amusement arcade and, on the 14th of November 1993, a 100 ton rig crashed into the pier, isolating the theatre and lifeboat station. Repairs were made in time for the 1994 season.

Major reconstruction work has been carried out since 1993 by contractors Dossor East (first winners of the National Piers Society’s ‘Peter Mason Award’ for engineering excellence.

In 1997, the old lifeboat house and launching ramp were temporarily removed.

The pier pavilion was reopened by actor Stephen Fry on the 27th June 2004, but was damaged by a storm early in the following year.

In February 2012, it was announced that £8m of work was set to begin on revamping Cromer pier and the townвЂ™s Victorian sea defences.

In April a six-strong team began using abseiling rope techniques to carry out work on the pier underside. And in September, divers begin working on the landmark pier’s legs. Replacement of some of the wooden decking was also started. But in April 2013 it was announced that due to very strong winds and heavy seas, the contract had been extended by two months. In May 2013 it was reported that repair work on the pier had cost around £260,000.

In July 2013, a group of students from Cromer Academy were given the opportunity to take over the running of the pier for a matinee performance as part of a work experience project.

Good progress was made on the repairs to the pier throughout the Summer months towards a completion date in the Autumn of 2013.

December 2013 saw major storms and six people had to be rescued from the pier when they became marooned when a tidal surge battered the pier.
The box office for the Pier Pavilion Theatre was destroyed in the storm but work began quickly to clear the debris and begin repairs to the damage caused by the storm. An initial assessment by North Norfolk District Council (NNDC) put the cost of repairs in the “tens of thousands”. However, despite the storm damage, the Cromer Pier Christmas Show still managed to go ahead.

Then on New Year’s Eve, the already storm damaged box office was further damaged by vandals. Despite this mindless idiocy, work continued on repairs to the pier.

As a result of the storm damage, ticket sellers set up shop in the bar’s ice cream box while repairs were carried out on the water-damaged pier. But in May 2014, a temporary box office was opened, with the expectation that the original box office would be ready for the summer season. The council announced in July 2014 that the nest stage of repair work would commence in September to have everything ready by Easter 2015.

March 2015 – Cromer Pier wins National Piers Society’s Pier of the Year
All of the hard work was repaid in March 2015 when the members of the National Piers Society voted Cromer the Pier of the Year 2015. Worthing took second place, with Eastbourne and Llandudno tying in third place. The society’s president, Gavin Henderson, said: “There is no business like show business and Cromer Pier proves it.”

June 2015 – Cromer crowned Pier of the Year at opening night ceremony
And in June 2015, Tim Wardley, chairman of the National Piers Society, handed over a framed certificate to owners North Norfolk District Council, confirming Cromer’s title as Pier of the Year 2015, at the opening night of Cromer’s famous seaside variety show.

July 2015 – Cromer now the last of pier variety shows
In July 2015, it was reported that Cromer was now the only end of the pier variety show remaining in Europe, but the pier continued to uphold this tradition in fine style with two shows being performed there throughout the summer.

July 2015 – The Guardian feature a fantastic visual tour of Cromer Pier
And also in July, as if to emphasise Cromer Pier’s enduring appeal, the Guardian published online a wonderfuil series of 26 full colour images of different aspects of the pier, complete with informative captions and visitor comments.

September 2015 – Cromer Pier Theatre has a bumper summer season!
In September 2015, Cromer Pier reported audiences for its summer show were up 10%, the show having been seen by 32,000 people. Favourable reviews, including in the showbusiness magazine The Stage, wet weaather, and not running any one night Sunday concerts at the pier as competition during the summer show run were all cited as potential factors in the increase.

October 2016 – Fishing could be banned from Cromer Pier?
A bar on fishing from the area around the lifeboat station had recently been put in place by the pier’s owners North Norfolk District Council and moves now seemed increasingly likely to ban all fishing on the pier. The problem was that an increasing amount of fishing hooks and weights were said to be accumulating on the pier from snagged lines, causing a health and safety issue.

November 2016 – Magical Cromer Christmas Show for 2016!
The essential ingredients of the Pavilion Theatre’s mulled version of its summer seaside special are the cosy atmosphere, bauble-bright colour, and the multi-talented performer, Olly Day.

January 2017 – Cromer reopens following storm surge
In January 2017, the storm-damaged promenade in Cromer reopened to the public five days after being pummeled by the sea. Clean up works were continuing and a rope access team worked under the pier to conduct repairs.

January 2017 – Cromer reopens following storm surge
January also saw an evocative article in the Eastern daily Press by Ian Collins about the history of Cromer Pier and his own personal experiences on the pier.

June 2017 – Cromer Pier Summer Show back for a 40th Year
In June 2017, it was reported that advance bookings for Cromer Pier’s 40th Summer variety show were in high demand. The only remaining end-of-the pier variety show, Cromer remained famous for its mix of talent, colourful costumes, dancers, stunning sets, lights and music

August 2017 – World Crabbing Championship helps restore peace to Cromer
After serious violent disorder caused by outsiders in the town the previous weekend, the end of August saw Cromer Pier help things to return to their normal peaceful state with the holding of the crabbing world championships.

January 2018 – Record-breaking season for Cromer Pier Christmas Show!
In January 2018, Cromer Pier reported that they had had more full houses than ever before which was reflected in their programme sales which were completely sold out by the end of week four, and even their ice cream sales were up on 2016 selling over 2,300 tubs during the intervals.

January 2018 – Folk on the Pier returns to Cromer for its 20th year!
Also in January, it was announced that Cromer’s popular folk rock festival would be returning to the Pier for it’s 20th birthday in the coming May.

February 2018 – New windshields for Cromer Pier?
A planning application for wind-shields in three areas of the pier was submitted by the pier’s management company in February 2018. However, Cromer Town Council raised multiple concerns over the plans with worries over loss of crabbing areas, safety issues, and where the shields would be stored when they were not in use.

March 2018 – Plans for Cromer Pier rejected
The wind-shields plans were rejected the following month. In their refusal statement to Openwide, who run the Pier on behalf of NNDC, the committee said: “In the opinion of the local planning authority the proposed works would be harmful to the special character of the grade II listed heritage asset, in particular its openness and visual symmetry”.

March 2018 – A spooky tale from Cromer Pier Pavilion!
The ghost of a well-known impresario and a host of hauntings was featured in an article on the Enjoy Cromer More website in March 2018. The ghost apparently meant that Cromer Pier was a magnet for paranormal investigators.

April 2018 – Cromer Pier’s Crabbing Festival back for 2018!
The festival, which takes place between Cromer and Sheringham, was advertised as being held from Friday May 18 to Sunday May 20, the weekend’s entertainment beginning with the Crab and Lobster Festival Grand Opening Concert at Cromer Pavilion Theatre.

April 2018 – Cromer Pier to lighten-up!
Also in April 2018, a proposal to allow three illuminated, and one non-illuminated signs, to be put up on the Grade II listed Cromer Pier was approved by the North Norfolk District Council.

September 2018 – The plot thickens at Cromer as Pier is closed for mystery BBC filming!
Cromer Pier closed for a day as a film crew headed to town for a BBC shoot, the details of which were being kept tightly under wraps.
Read More

January 2019 – Crowds flock to Cromer Pier after BBC One festive film
Cromer in Norfolk was the location for the channel’s festive idents, which were shown before programmes. It also featured in the short film Wonderland , which showed a mother and teenager spending time together at a funfair on the pier.
Read More

January 2019 – Antiques Roadshow from Cromer Pier due to be aired on 3rd February
The episode of BBC1’s popular TV series filmed at Cromer Pier was due to air on Sunday, February 3, at 8pm.
Read More

February 2019 – £1 million investment in Cromer Pier
In February it was reported torth Norfolk District Council (NNDC) was spending a total of £1,000,000 to protect the future of the town’s famous pier. The improvements including strengthening the pier’s structural base, expected to be completed by early April, and the roof of the theatre, to be finished in time for the first pier show of the year on Thursday, March 28.
Read More

May 2019 – In praise of Cromer and its Pier!
If you want something with a little more life, head west along the sea front to Cromer’s grade II-listed pier, which opened in 1901. At the far end, giddyingly suspended over the waves, you’ll find the Pavilion Theatre, one of only a small clutch of pier theatres left in the UK.
Read More

June 2019 – Cromer Pier summer show gets of to a spectacular start!
Opening night of the Cromer Pier Show is the fail-safe way to know summer is well and truly here. The two-act all-singing, all-dancing production has been delighting the long-time residents and one-off visitors to the town since 1977, and 2019 was no exception.
Read More

September 2019 – Insurance finally pays-out for Cromer Pier storm damage in 2013
A total of £468,954 of insurance money was finally received by North Norfolk District Council (NNDC) after Cromer Pier was damaged in a storm surge in 2013.
Read More

October 2019 – Is Cromer Pier value for money?
New figures showed how North Norfolk District Council had spent more than £4.5m of public money over the previous 14 years to ensure the pier continued to be an integral part of life for residents and visitors to the popular town.
Read More

December 2019 – Play set on Cromer Pier to open in London in February
Playwright James McDermott, from High Kelling, based Time and Tide on the pier and the town’s residents. The cast included renowned TV, film and theatre actress Wendy Nottingham, who previously lived in Cromer.
Read More

The seaward pavilion continues to stage traditional summer and Christmas holiday season variety shows and concerts. Refreshments are available from both the entrance building and the pavilion foyer. Outdoor seating is available.

The impressive ambience of the pier is maintained by the complete absence of any amusement machines or other modern artefacts.

Admission to the public is free.