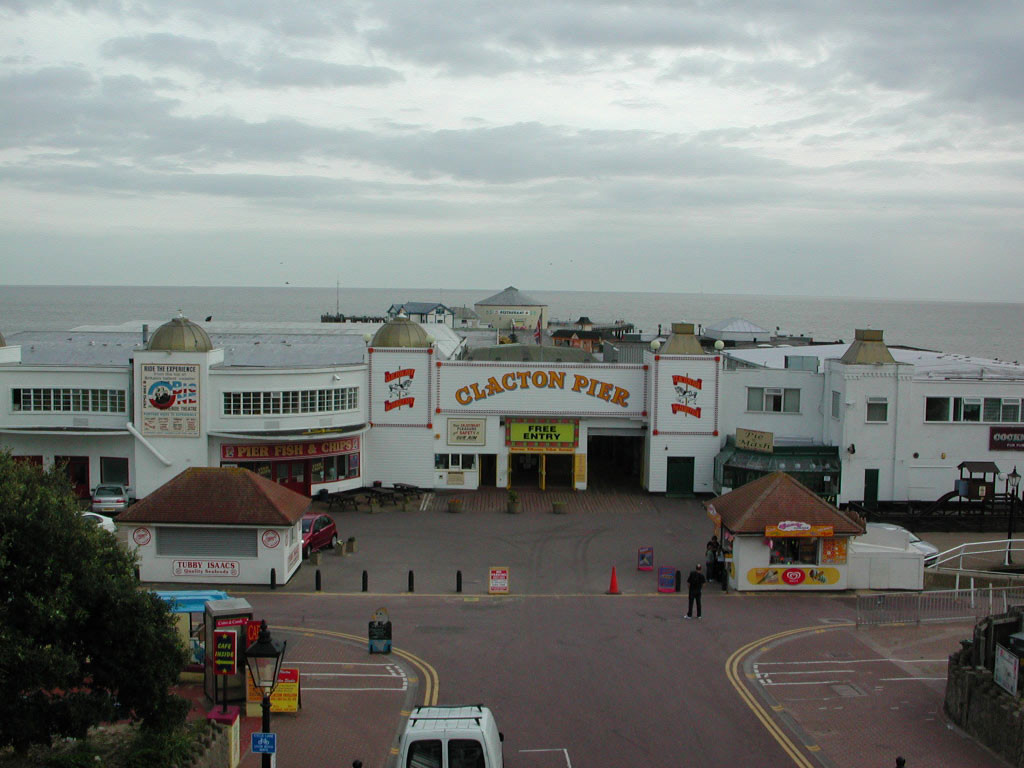 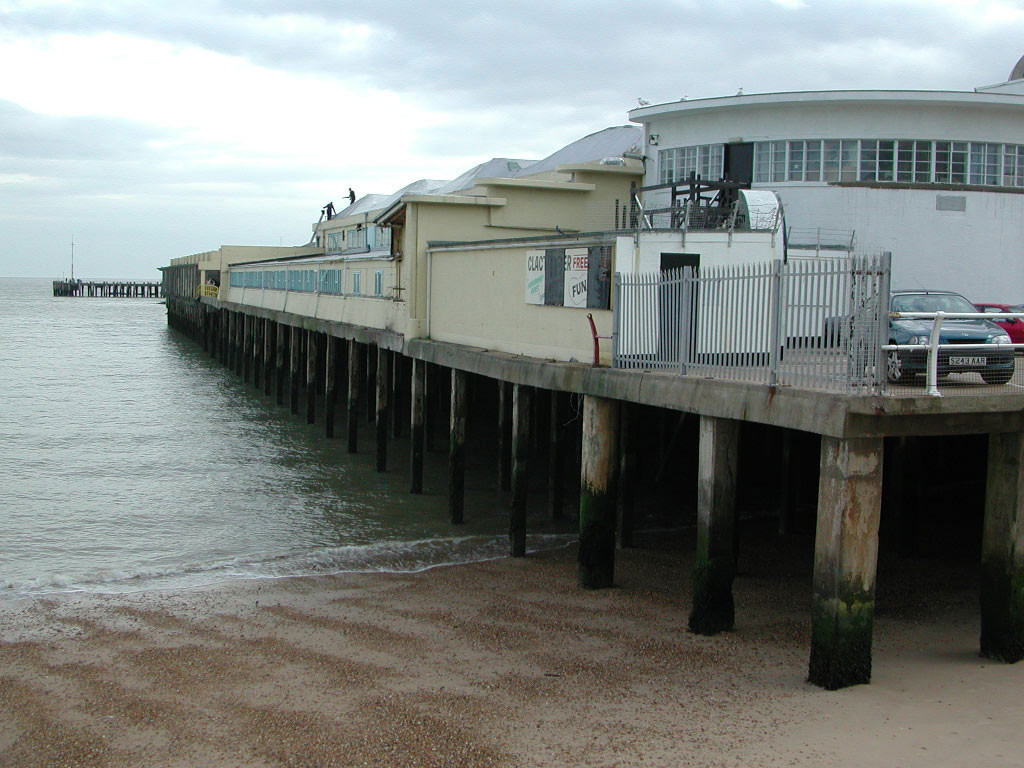 Designed by Peter Bruff, Manager and Engineer of the Eastern Union Railway, the pier opened on 18th July 1871. A lifeboat station was added in 1878 and extensions in 1890-3 took the pier’s length to 1180 feet. A new polygonal head incorporated a pavilion with concert hall, stalls and refreshment and waiting rooms. The new landing stage catered for increased steamer traffic. In 1898, the original pier company went into liquidation. When the Coast Development Company took over the structure, it was valued at £52,112.

Ernest Kingsman bought the pier in 1922, and was responsible for many changes. That year saw the building of the Blue Lagoon Dance Hall and the Lifeboat House (enlarged in 1983). The Ocean Theatre was erected in 1928. The pier was widened in 1931 and in 1932 the Crystal Casino and Swimming Pool were constructed.

In 1940, the pier was sectioned for defence purposes. The Crystal Casino and a childrenвЂ™s theatre were demolished and not replaced.

After the war, the pier was repaired and ownership passed to the New Walton Pier Company. Storms hit the pier in 1978, 1979 and 1987. It was bought by Anglo-Australian Automatics in 1981 for £2 million, but was almost a year in receivership before passing into the hands of E & M Harrison Ltd in October 1994. Refurbishment work began almost immediately.

E&M Harrison Ltd retained ownership until March 2009 when it was sold to Billy and Elliot Ball, trading as the Clacton Pier Company. The new owners and their family have been involved in amusements in the resort for more than 60 years and described themselves as custodians of a landmark for the whole town.

In April 2009, a 50ft-tall helter-skelter was erected on the landmark as part of the new owners plans to renew the attraction.

In March 2011, Clacton participated in the Party on the Pier event to herald the start of British Tourism Week and in June 2011, a new roller-coaster, ‘Stella’s Revenge’, was opened attracting crowds looking for the latest thrill ride.

Current facilities also include a very large amusement hall, tea rooms, restaurant, plus a range of shows and stalls on the open deck.

In August 2012, riders on the Stella’s Revenge roller-coaster escaped serious injury following an accident. Ambulances and medics attended but nobody required hospitalisation.

And in April 2013, the £75,000 Sky Trail High Ropes course was opened as part of the new Activity Zone with water walker balls and bungee trampolines in the middle of the pier

November 2013 – Storm hit helter-skelter to be back in 2014
Clacton Pier’s helter-skelter was blown down in October 2013 after Essex was hit by strong winds. No-one was hurt and the structure collapsed on to the pier rather than falling into the sea. In November, the pier’s administration manager Sharon Charters said experts were confident it could be repaired for the next summer.

April 2014 – New attraction for thrill seekers on Clacton Pier
A new ride reaching 100 feet into the air, and making it the tallest attraction on the pier, was opened in April 2014. Named the Tower, it took two days to set up but was immediately a big hit

April 2015 – Clacton Pier launches new payment/loyalty card
The new Fun Card was designed to bring the pier into the 21st century as it was the first in the country to adopt the new system which provided a cashless method to replace traditional ride tokens.

June 2015 – Helter-skelter finally repaired
The helter-skelter that was blown down in October 2013 was finally ready for service in June 2015 after a lengthy programme of repair work to make sure it was “restored to its former glory in the correct and proper way”.

June 2015 – Clacton Pier owners call for funding to be made available to private sector piers
Also in June, the owners of Clacton Pier said that they had invested heavily in improving the pier from when they acquired it in 2009. The pier’s managing director, Billy Ball, commented that there should be more financial support for privately owned piers to keep these historic structures standing.

May 2016 – Helter Skelter returns to Clacton Pier!
Clacton Pier’s famous helter skelter, which was destroyed by 70 mph winds in 2013, was rebuilt and brought back into action in May 2016. The 50 foot tall attraction had been a feature of the pier since it was first constructed in 1949.

March 2017 – Clacton pier memorabilia to go to auction
In March 2017, it was reported that many of the old fairground items from Clacton and Walton piers were to be sold at auction at Reeman Dansie Auctions within the month. The items would be available to collectors at an estimated price of £100-150 each.

May 2017 – ‘Jolly Roger’ pavilion to become home to a travelling circus
May 2017 saw an announcement that the long closed Jolly Roger pavilion would be housing a non-animal circus featuring acrobats, clowns and a traditional water show for the late May bank holiday and right through the school summer holidays.

July 2017 – Refurbishment work at Clacton Pier gets underway!
In July 2017, work began on a seven-figure makeover to the pier, focussed on modernising and strengthening the pier’s infrastructure, in preparation for further work at the end of the season.The refurbishment work was concentrated on areas which had gone untouched for 90 years.

October 2017 – Clacton Pier undergoes £300,000 refurbishment
In October 2017, work was well under way on a £300,000 project to strengthen the structures holding up Clacton Pier. More than 3,000 concrete piles support the pier and many were more than 90 years old.

November 2017 – Clacton Pier prepares for £1 million investment
By November 2017, work was already well underway to ensure the pier was ready in time to accommodate the changes, which were aimed at making the six acre site a 52-week a year attraction.

January 2018 – Clacton Pier refurbishment gets underway!
In January 2018, the Clacton Pier Company was reported as putting together the final touches to their plans for a £1 million refurbishment project aimed at creating a year-round attraction. While the renovation works were being carried out, the pier would be in ‘complete darkness’ and have its rides removed.

March 2018 – Clacton Pier raises the roof for bumper Easter weekend!
The replacement of the roofing on the main concourse at Clacton Pier, which had been carried out using a massive crane, was completed in March 2018. Pier Director, Billy Ball, said “We will be fully open and the main entrance to the site will be in use for the first time since we started the project now that the roofing has been put back on the main concourse.”

April 2018 – Competition launched to rename Clacton Pier’s Jolly Roger
A competition was launched in April 2018 to rename the Jolly Roger – formerly known as the Pier Pavilion and the oldest building on Clacton Pier. This was part of a rebranding project on the pier in which a number of buildings were being renamed as part of the pier’s £4 million development.

July 2018 – Circus Fantasia returns to Clacton Pier for the summer season!
In July it was announced that Clacton Pier Circus would be staged in the Jolly Roger before returning for the opening of the new development on July 21 from when they perform throughout the summer holidays.
Read More

August 2018 – Fantastic pictures of the new-look Clacton Pier!
Huge changes were made at Clacton Pier to include a crazy golf, an all-weather adventure soft play area and two new restaurants. The new £4m development was unveiled to mark the attraction’s 147th birthday this year.
Read More

August 2018 – The Jolly Roger remains at Clacton Pier!
The oldest building on Clacton Pier was announced to be retaining its name of the Jolly Roger into the foreseeable future. The pier’s owners said they had listened to public opinion after launching a competition earlier in the year as part of a rebranding exercise.
Read More

August 2018 – Looking for a job on a pier? Clacton Pier may have the position for you!
The completion of the first phase of the pier redevelopment project led to six significant roles at senior and mid-level management becoming available.
Read More

March 2019 – Further development at Clacton Pier!
In March it was announced that Clacton Pier’s adult gaming zone would double in size as part of a major overhaul. The scheme was part of the second phase of the attraction’s development. It would also be re-branded as the Pier Casino.
Read More

March 2019 – Proud to keep it in the family at Clacton Pier!
The Ball brothers celebrated 10 years of success and said “We are in it for the long haul and it is part of a family legacy”.
Read More

May 2019 – Circus Fantasia returns to Clacton Pier!
In May, it was announced that the circus would perform twice daily in the Jolly Roger Arena for nine days over Whitsun and then would return for the whole of the school summer holidays. The Clacton Pier Circus would begin on Saturday, May 25 and run through until June, with shows at 2pm and 4.15pm.
Read More

May 2019 – Clacton gets ready to host Seaside Revival Day!
In May 2019, it was reported that the retro event would take over the town’s West Greensward, Marine Parade West, on Sunday, May 26, from 10am to 5pm.
It was part of a two-year project designed to celebrate the heyday of Essex’s Sunshine Coast, from Harwich and Dovercourt to Walton, Frinton, Jaywick Sands and Clacton. The grand finale of the project would be Sunday’s free, family-friendly Seaside Revival Day.
Read More

June 2019 – Clacton Pier has a (Ringo) star role in new Beatles film!
Nigel Brown, Clacton Pier’s communications manager, said you can never underestimate the impact that Clacton and the pier appearing in a film like Yesterday can have.
Read More

June 2019 – In defence of Clacton-on-Sea!
A recent National Piers Society visit netted Clacton Pier an award for outstanding achievement, only the second time such an accolade had been bestowed in 40 years. It meant a lot to the pier owners to be “recognised by the enthusiasts”.
Read More

June 2019 – Circus Fantasia at Clacton Pier cancelled for 2019
Award winning Circus Fantasia cancelled its six week run through the summer holidays, claiming that not enough people were coming to watch the show. The pier was looking for a new show to fill the venue.
Read More

July 2019 – Clacton Pier announces new log flume for 2020!
The new ride known as the White Water Log Flume would be the single largest investment in a new ride on the pier for around 40 years. The flume will be the heaviest ride on the structure weighing 160 tonnes in total and holding 80,000 litres of water.
Read More

August 2019 – £50,000 Coastal Revival Fund grant enables multi-million plan for Clacton Pier’s Jolly Roger pavilion
£4 million had been totalled as the final bill. The revamp was expected to take 18 months to complete and turn the old building into a two floor venue with many different uses.
Read More

September 2019 – Bumper visitor numbers at Clacton Pier!
Almost 1 million people poured through the doors of Clacton Pier over the previous 12 months – the same number as in the heyday of Butlins. New equipment installed at the attraction at the end of August last year counted more than 930,000 visitors up to the last Bank Holiday weekend.
Read More

October 2019 – Clacton Pier gets evil for Halloween
The Evil on Sea, Fear the Pier walk through experience was part of Clacton Pier’s Halloween Festival. The scary event included free rides, adventure golf and a drink in the bar.
Read More

October 2019 – Improvement works get underway at Clacton Pier for the arrival of new log flume
The landmark’s in-house team started to demolish the 1930s Queen Mary building, which divided the former swimming pool area and the rides deck. The removal of the building will pave the way to construct five reinforced concrete enhancements.
Read More

November 2019 – Clacton Pier fireworks go with a bang!
Almost 5,000 people braved the elements to enjoy the climax of Clacton Pier’s month-long Halloween celebrations. Saturday night all saw the final performances of Evil on Sea while SMC entertained those who packed into the Boardwalk Bar.
Read More