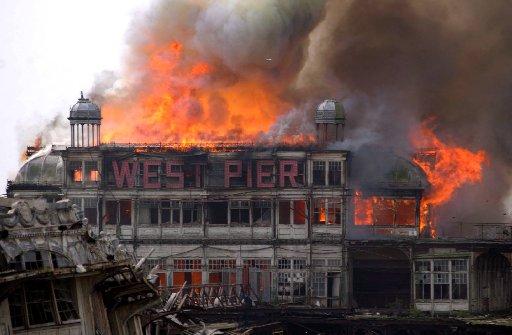 The West Pier fires have all the ingredients of a great story: a mystery, a picture-perfect setting, a mix of characters high and low. All the ingredients, that is, except the most important one: an ending. After seeing the Pier’s remains, Paul Caruana Galizia set out to find who profited from the fires. The first person to return his call was Brighton’s prime suspect. But the story became more about class and conflict, arson and evidence, and the different visions we have for the same places.

“The talk is an opportunity to show people the makings of the article and take them behind the scenes of the reporting – why it was difficult and why it still is difficult for those coming to the story for the first time,” says Paul. “It’s a chance to explain the problems I bumped into, why going into the case was so hard but fascinating and, I hope, to show why it still remains unsolved.”

Paul Caruana Galizia is from Malta and writes for Tortoise. He became a reporter after his mother Daphne was assassinated. Since then he has won some journalism awards and, with his two brothers, a Magnitsky Human Rights Award and an Anderson-Lucas-Norman Award for tax justice

Paul will be in conversation with West Pier Trust chairman Michael Farthing at the i360. There will be a Q&A opportunity following the talk.

The talk will be held at Brighton’s i360 on Thursday 16th June from 6pm to 8pm. For further information and to book tickets please click here.