Wonderful look-back at the highs and lows of Redcar Pier
The 1,300ft structure opened on June 2, 1873. In 1980, the pier was declared unsafe and was closed. In June 2010, approval was given for a revamp of Redcar seafront which included an 80ft (24.3m) tower structure which was termed Redcar’s ‘vertical pier’. The original pier sold for £250 as scrap.
Read More

A decade since Hastings Pier fire
More than 60 firefighters bravely tackled the fire as it raged throughout the day, with some even taking to the seas to douse the flames from on board an RNLI lifeboat. The Herculean effort could not save the derelict pier and early estimates suggested as much as 95 per cent of the structure had been destroyed. That included the historic ballroom, which had played host to some of the biggest names in music and was where the fire began just after 1am
Read More

Cromer Pier thanks customers for their support during difficult season
Debs Lewis, marketing and sales manager, at Openwide which manages the Pier, said: “We have been overwhelmed by the support shown so far with many people kindly donating their ticket cost, it has been immensely helpful in these incredibly challenging times for the theatre and the pier.”
Read More

Withernsea Pier project receives £10,000 donation from down-under!
In October, a well-wisher from Down Under came to the aid of plans to build a pier in a Yorkshire coastal town with a surprise £10,000 donation. It was the second £10,000 donation in less than two months and brought campaigners a step closer to their £209,000 target to build a viewing platform as the first stage of the project.
Read More

Hastings Pier to open ice rink for winter season
Hastings Pier announced in October 2020 that they would have an ice rink installed as part of its Winter Wonderland event. The rink would be open to visitors between November 21 to January 1, alongside festive rides and plenty of food and drink. A spokesman for Hastings Pier said the move would be a UK first with the attraction becoming “the only pier in the UK to have a real ice rink”.
Read More

Cromer Pier Theatre receives lifeline from Arts Council England Culture Recovery Fund
Openwide Coastal Ltd, proud custodians and operators of Cromer Pier and Pavilion Theatre on behalf of North Norfolk District Council and the producers of the world famous Cromer Pier Show for the previous 19 years, announced in October that they were delighted with the news from Arts Council England that they had been awarded a grant from the Culture Recovery Fund.
Read More

Bleak future for Helensburgh Pier as restoration group disbands
Citing a lack of cooperation from Argyll and Bute Council in seeking a permanent solution, HSDP chairman David Cantello said the group had come to the decision that any further work was “futile”. He said: “Waverley will, of course, no longer be able to use the pier. The council appears to have determined that the pier, with its future potential and Waverley’s presence, is of no benefit to the town and the wider public”.
Read More

New pavilion plans scrapped at Southend Pier
The proposal for the new pavilion – on the old AMF bowling alley platform at the entrance to the landmark – was shelved in October because the council could not fund the project. The council said it would instead focus on the pierhead alongside a plan to upgrade the pier trains with their heritage green and cream livery. The new pier pavilion would have been built before 2022, on the former AMF bowling alley, which was destroyed in the 1995 fire.
Read More

Weston Grand Pier celebrates its heritage
In October, the Grand Pier produced huge (10 metre by 7 metre) images of their previous grand pavilions from the 1900s and 1930s to display on their current (2010) pier pavilion. 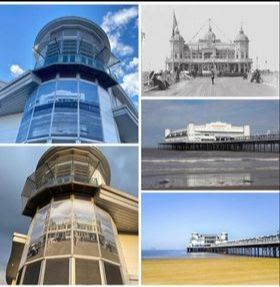 Planning permission sought for renovation of Worthing Pier Southern Pavilion
Alex Hole, owner of the Perch cafe on Lancing seafront, announced in October that was planning a number of changes to the iconic Art Deco building. Refurbishments included extending the kitchen, moving the bars to locations more suited to a restaurant environment, a new corridor for the toilets and adding booths to balconies. As well as a number of internal alterations, new kitchen extracts, an illumination fascia sign and flags were proposed.
Read More

Clacton Pier fears further lockdown restrictions
Clacton Pier director Billy Ball said it has already been an extremely challenging year for all those in the sector. “Due to the initial lockdown and various restrictions, income has taken a real hit and some in the industry are already literally clinging on by their fingertips,” he said. “Any further lockdown would be a huge blow for those businesses and it would have a significant impact on the pier”.
Read More

Bangor Pier to remain open during Welsh lockdown
The local lockdown rules in Bangor were being replaced by new national firebreak restrictions from 6pm on Friday 23 October until 9 November. The Welsh Government said the fortnight-long action was needed to save lives and prevent the NHS from being overwhelmed. A spokes-person from Bangor City Council said: “To encourage people to enjoy the outdoors and to facilitate exercise, Bangor City Council wish to confirm that the Pier, like parks and other open spaces, will remain open during this ‘Firebreak’ lockdown”.
Read More

Eastbourne Pier set to reopen this week
Abid Gulzar announced he was re-opening the doors on Friday 23rd October and said he had invested heavily on the site during lockdown, building four new units. Mr Gulzar said public safety remained his number one priority in what he called “these very challenging times”. The arcades and a handful of the concessions would open first with the other units to follow.
Read More

Clacton Pier plan to put the festive back into Christmas!
The landmark said the Santa’s North Pole Experience would be bigger and better than anything put on over the festive period in the past. Pier director Billy Ball said that with many major town and city-based Christmas festivities cancelled families would be looking to local events. “We aim to offer a quality festive experience which can be enjoyed by all and will also offer something different to past years,” he said.
Read More

Commemorating 50 years since the partial collapse of Clevedon Pier
The 50th anniversary of the collapse of Clevedon Pier was commemorated with a brass plaque unveiled by a relative of the man who built it. President of Clevedon Civic Society, Julia Elton, the great, great granddaughter of Sir Arthur Elton – who was among the original builders – praised the town’s long-running campaign to keep the pier open as ‘the most terrific success story’.
Read More

New bar and restaurant planned for Southend Pier
Southend pier announced it could soon boast a new £336,000 restaurant and bar offering picturesque views of the Thames Estuary. Ambitious plans had been revealed for the plush new restaurant at the end of the 1.3-mile landmark as the town attempted to seal its reputation as a day -trippers’ paradise. Southend Council, which was spearheading the proposal, said works to convert the Royal Pavilion could start as early as the following February.
Read More

Plans approved for Worthing Pier’s Southern Pavilion
Gary Peck, the council’s planning services manager, said some of the internal changes such as removing some ‘ugly’ partitions would make a significant difference to the appearance of the building. He added: “Its recent period of disuse has left it in something of a state and clearly not a building that fits with what we want to see at the end of the pier. “This application does offer a significant opportunity to restore it to its former glory. Used properly it could be a real asset to the pier and the town.”
Read More

Birnbeck Pier owners forge ahead with structural surveys despite CPO
The owners of Weston-super-Mare’s dilapidated Birnbeck Pier said they were moving forward with plans to repair the structure – at the same time as the council wanted to force its sale. CNM Estates, which purchased the pier in 2012, had appointed specialists to carry out a 3D measured laser survey of the pier. The survey would provide vital information for engineers to carry out repair works to the structure. The news came just weeks after North Somerset Council agreed to move forward with the compulsory purchase of the pier.
Read More