Deal Pier returns to TV screens in ITV’s Liar
In 2017 Liar had showed the pier in its full glory, looking picturesque as it was lit up at night. The two main characters were filmed walking down it, and a promo picture of Laura showed her standing on it. The pier has since celebrated its 60th birthday and has undergone a facelift, with work carried out by Dover District Council.
Read More

Could Herne Bay Pier ever be reconnected to its pier head?
Canterbury City Council, who look after the pier’s head said “The steel substructure of the central and southern section, which supports the timber decking and iconic dome, appears to be in a reasonable condition with a level of corrosion and deterioration you would expect for a maritime structure of its age with no routine maintenance. The dome itself is deteriorating. Our coastal engineers have been looking at the best way to prolong its life and have come up with a design they think will work”.
Read More

Florida’s St Petersburg Pier set for grand opening after rebuild
The groundbreaking for “Pier Park,” an $87-million, reimagined pier at the dead-end of 2nd Avenue NE, was back in 2017. Nearly three years later, St. Petersburg officials say it will be ready for residents and visitors to experience by mid-spring.
Read More

Questions over Saltburn cliff lift’s value for money
The Saltburn funicular is thought to be the oldest operating water-balance cliff lift in the UK. Chris Gallacher, of UKIP, asked whether the cost of operating and maintaining the Grade II-listed attraction, dating back to 1884, was a “cost burden”.
Read More

A piece of Blackpool North Pier’s history washed ashore
A light fitting believed to be from the North Pier’s Indian Pavillion, which was destroyed by a fire in September 1921, was found on the sand under the pier following weeks of stormy weather. Pier owner Peter Sedgwick said: “Because of the storms, the sand around all the piers is getting low, and it’s starting to show all the steel that’s been hidden for years”.
Read More

Never mind the Sex Pistols, here’s Southsea South Parade Pier!
A former Sex Pistol brought his current band to Southsea to shoot a music video, but there was little sign of the filth and the fury his old group was famous for.
Read More

Brighton Palace Pier goes green!
Brighton Palace Pier has struck up a two-year deal with green firm Octopus Energy in a bid to boost its eco credentials. The partnership will prevent more than 1,000 tonnes of carbon dioxide from being released into the atmosphere. That is the equivalent of taking 319 cars off the roads for two years.
Read More

New rides start to take shape at Clacton Pier
Pier bosses said work is progressing well on the White Water Log Flume and it is expected to be open in time for the Easter holidays. The sub-frame has been finished, all the tank station constructed, and the lower sections completed. Pier director Billy Ball said that he is relieved to see the Log Flume starting to grow and it is now about one third of its final height.
Read More

Beach erosion causing foundation exposure for Blackpool’s three piers
There may be trouble ahead for the resort’s three famous piers, as owner Peter Sedgwick has voiced his concern about falling sand levels – which has left scrap metal from generations past exposed beneath the structures. He said: “The sand is falling so much around the piers it’s showing the bottoms of the legs that haven’t been seen for years. They were set in concrete, and the concrete is on show, it’s dropped that low”.
Read More

Review of Graham Swift’s new book set in Brighton in 1959
Swift’s books have never been about the crash-bang-wallop but his recent work has grown even more meditative. In Here We Are he turns his attention to the lot of the end-of-the-pier entertainer during that Brighton summer of 1959 when evenings were beginning to draw in on the year and a particular branch of showbusiness.
Read More

Clacton Pier turns blue in support of the NHS
Clacton Pier joined the amazing outpouring of support for the National Health Service by turning its outside lighting blue and white. A message of thanks was also posted on the screen at the front of the landmark as a gesture of backing for all the workers involved in the effort to save lives from coronavirus. The lights will remain those colours for the foreseeable future and the message will stay on the screen throughout this period of lockdown.
Read More

The National Piers Society’s Chris Wyatt features in the latest edition of The Countryman magazine.
Chris talks about his love of piers and why he volunteers as a Trustee and Welsh Piers Liaison Officer for the NPS. You can read the full article here.
Reproduced with the kind permission of The Countryman 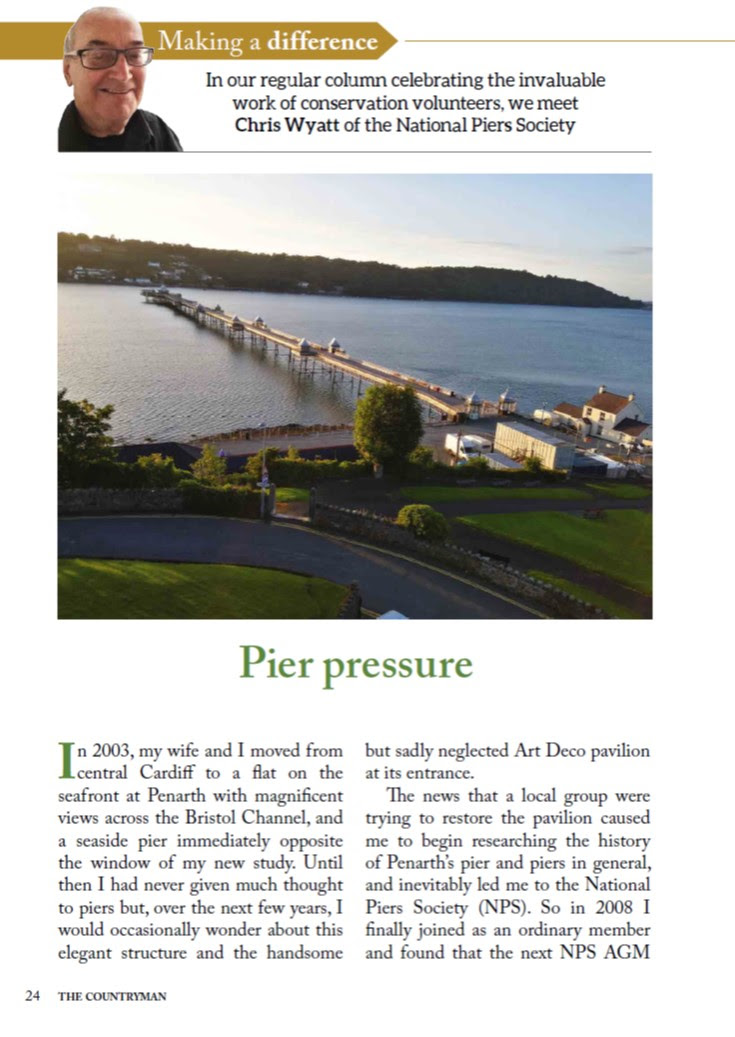 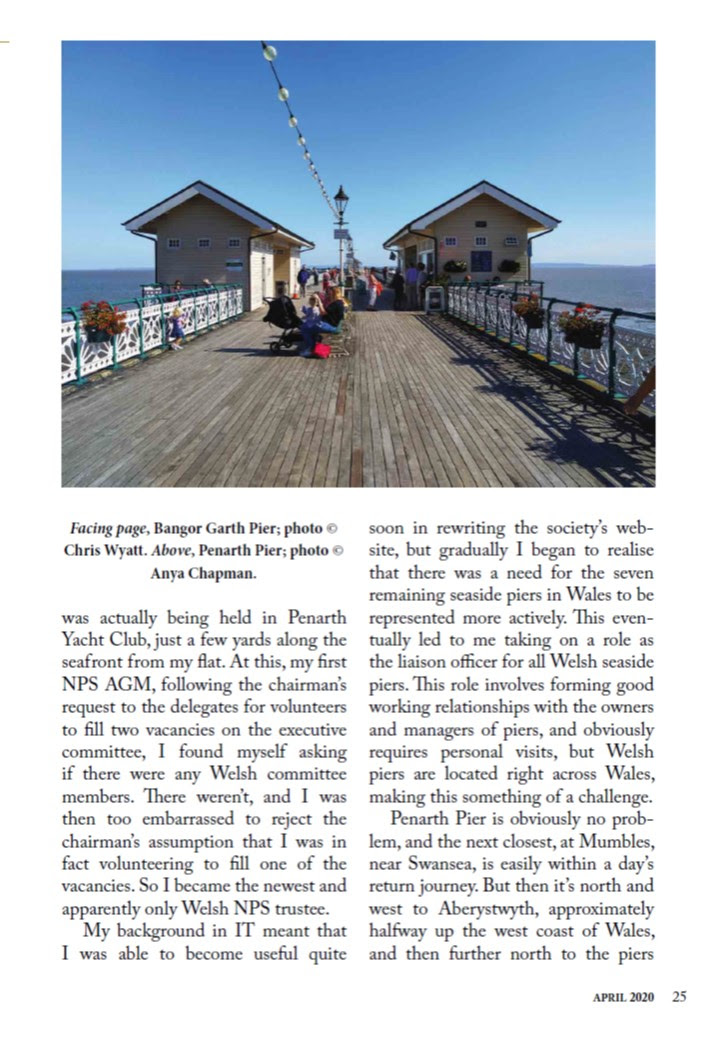 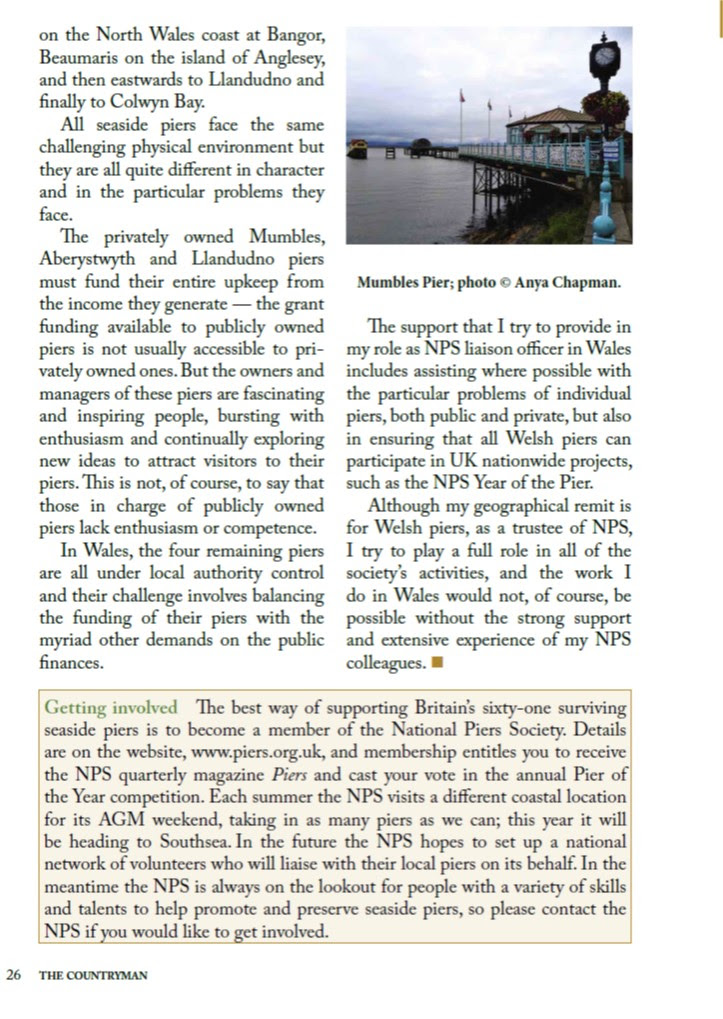